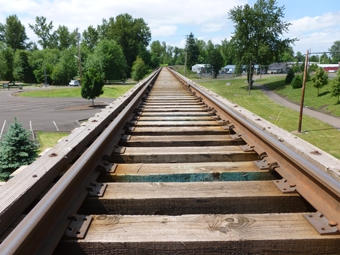 All indicators are pointing to a vibrant crosstie market across all segments: wood, concrete, steel, and composite. The freight railroads’ estimated $29 billion in 2015 capital expenditures is one driving factor, but healthy expansion plans among transit agencies are also fueling the good news.

The timber crosstie market took a hit in late 2013 and into 2014 as it dealt with raw material supply issues. However, Jim Gauntt, executive director of the Railway Tie Association (RTA), says the market is finding its path to equilibrium. While current demand is robust, there is also the potential for it to skyrocket in 2015.

“RTA utilizes a proprietary econometric forecast to develop demand scenarios,” says Gauntt. “This year, our base-case scenario is for fundamental demand to rise about 6.5% to 24.4 million ties. If enough ties can be produced, given also the fact that we estimate that there were between 700,000 to one million ties of unmet demand in 2014, total purchases could skyrocket to around 25 million. We don’t know that it will play out this way, but it illustrates just how strong demand could be. So far in the first quarter, we have experienced significant demand increases from the commercial markets, so we believe purchases of 24 million-plus is definitely possible if supply can increase fast enough.”

How does the market get to a nearly million-tie deficit? Log supply, or lack thereof, in this case, plus demand for the hardwood in multiple markets. First, wet weather in 2013–14 coupled with a constrained logging community translated into raw supply issues negatively affecting the timber crosstie market. At the same time, other demands on the hardwood sawmill further constrained supply.

“We began in June of 2013 to sound warning bells for the railroads that other wood products markets were heating up and that without careful attention to pricing, a lot of wood fiber would rollover into crane mats, board road, and lumber for export,” explains Gauntt. “Unfortunately, price increases came slowly with a little bump in late 2013 and then serious realization in early 2014 that production was evaporating at an enormous pace. By the end of 2014, we had lost a little over 20% of wood tie production. This loss, coupled with strong tie demand, drove the RTA Inventory to Sales Ratio from 0.84 in December of 2012 to as low as 0.62 in July of 2014. The result was evaporation of air dry inventories and more Boultonizing of ties to meet what part of the demand could be met.”

Gauntt notes that in order to build inventories in air stack yards, it will take some level of “over-production,” for an extended time period, to regain the ground that was lost from the previous two-year period. Exactly how much over-production will be needed is still in question, but hitting that moving target is something Gauntt feels is still attainable.

“To give you some perspective, if the wood tie industry produces 25% more ties in 2015 than 2014, and demand is as we forecast, the year will end with zero increase in inventories. Basically, it will take more production than that to start the re-equilibration process. There are signs we may be able to do this, but it’s anything from certain if production can grow at such a rapid pace. Fortunately, the Chinese domestic housing market has softened and crane mats and board road slowed as the number of rig counts tanked with lower oil prices, but no one expects that to last forever. Now is a key time for sawmill producers to focus on ties,” says Gauntt.

While lower oil prices have sent rig counts down, how those prices will affect timber crosstie demand is uncertain.

“Our forecast model did create an adverse scenario outlook for tie demand based on extended lower oil prices, but even if that were to transpire, we would expect demand to not fall below 23 million ties, plus the unmet demand from 2014,” says Gauntt. “In that scenario, tie production must rise above a 20% increase to improve inventories. We wrote an extensive piece on this in our Jan./Feb. issue of Crossties; the digital edition plus the scenario spreadsheet for Inventory/Sales can be found on our home page, www.rta.org.”

What’s more of a potential issue is weather. While Gauntt says the unusual winter cold did not have a debilitating effect on production in January and March, February was softer than expected. “That brings us to the next issue: Will we have a mild spring and then also tropical weather season?” asks Gauntt. “All of us tie guys are praying so, otherwise, it would put a big hurt on the production-meeting-demand scenario the industry is hoping for.

“If we see all of the demand met in 2015, we could see an increase in demand of 200,000-300,000 ties in 2016. If demand is not met in 2015, building tie inventories could take even into 2017. Our sense from the data is that long-term demand will not fundamentally dip from these levels any time soon and may, in fact, grow incrementally as the U.S. economy prospers. Thus it is critical to ramp up production as quickly as possible.”

Wood crosstie suppliers agree with Gauntt’s assessment of the market with all expecting to see an uptick in demand in the upcoming year. Tim Carey, industrial products specialist with Arch Wood Protection, Inc., says, “The white wood supply is catching up to railroad needs and, for our Chemonite® ACZA (Ammoniacal Copper Zinc Arsenate) treated crossties, we anticipate continued acceptance and growth. Evaluation of in-track performance and acceptance in standards such as AWPA and AREMA have led to further usage of ACZA treated ties produced from both softwoods and hardwoods in North America. Our product warranties and the ability to easily incorporate borates with Chemonite® ACZA treatment in an efficient one-step treating process also contribute to sustained growth in the use of the product.”

Gross & Janes Co. President and CEO Mike Pourney says, “Demand is strong for the foreseeable future from the railroads and all indications are that demand will remain strong. The trick will be, can we catch up with production from the shortage of 2014? A lot will depend on weather. It’s been wet in Texas through Arkansas, the lower Midwest area, so we’re hoping we get a dry spring and tie production will pick up.”

Koppers is forecasting a 10-15% increase in crosstie production. “A key driver in the increase in raw material supply is a reduced demand for other sawn products, such as lumber and board road that is fed primarily into the housing and energy markets, respectively,” says Gary Ambrose, vice president, Commercial Railroad Products and Sales. “Due to latent demand, the increased production will come closer to addressing immediate demand, but will not be sufficient near-term to backfill the reduced inventories that developed over the past two years. A continued strong supply situation will ultimately meet both the immediate and long-term demand, but it likely will take the balance of this year and 2016 to achieve that objective. Crosstie inventories will not rise at the same rate as the raw material increases. A large percentage of the crossties will be Boultonized and used this year for both Class I and commercial railroad demand. It’s likely the industry will again use more crossties than what is produced. All in all, we are looking at a much more optimistic supply market than we experienced in 2013 and 2014.”

George Caric, vice president marketing at Stella-Jones Corp., says the company is in recovery mode for 2015. “By that I mean we are trying to fill the orders we have on the books for 2015 while trying to get an inventory stacked for drying to meet the 2016 demand. We are gaining some ground in certain locations of the country. However, there are areas that have not dried up.” He says the two plants Stella-Jones acquired from Boatright Railroad Products have played an integral roll in keeping orders filled, which has been needed as demand continues to be strong in spite of oil pricing.

“Hopefully, by the late fall, we will see tie production back to levels that will give us the recovery we need,” says Caric.

Suppliers of concrete crossties are also prepping for high demand in 2015 driven by the Class I’s, transit projects, and industrial developments.

L.B. Foster Co. is projecting another robust market for concrete ties in 2015. According to Steve Burgess, vice president, Concrete Products, the company is seeing relatively strong demand across all of its end market segments. “Activity among the North American Class I railroads remains solid from both traditional and now nontraditional users of concrete ties,” he says. “Several railroads are actively reconsidering the potential application of concrete ties as the value proposition has improved for their use. We are also seeing some renewed interest from short lines and regional railroads due to availability issues with wood ties.

“In the industrial segment, work continues in energy market applications as existing projects in the oil and gas industry continue to be built out. And port development continues to drive demand for concrete ties. We have experienced mixed activity in the transit sector. But we expect a pick-up in demand here as projects move from the design-build stage to actual construction. 2014 was a very good year for concrete tie demand and we expect more of the same in 2015.”

Scott Craig, general manager, KSA, sees the railway industry, as a whole, doing well and expects good things for the upcoming year. “The Class I’s are moving product and spending money for capital projects to what looks to be an industry record,” he says. “The commuter and light rail systems are predicting record numbers when it comes to moving people and KSA hopes to benefit from all of it.

“KSA is in the process of putting together a very good year, along with being diverse when it comes to the type of projects we are doing. Our current backlog is made up of about 60% of Class I work, 30% of light rail, and 10% of commuter rail projects. It seems that people are finally realizing that riding trains, even with lower gas prices, is the way to go and moving product with trains is also the way to go. I like this trend and I hope it continues.”

Rocla Concrete Tie Inc. is anticipating that Class I demand will make 2015 one of the company’s strongest years to date.

“The crude by rail movement, along with system-wide carload increases for the Class I network, continues to drive demand for more capacity and safety upgrades, and concrete ties are a major part of those programs,” says Brett Urquhart, vice president business development. “Rocla has invested in increasing not only our production capacity, but also our shipping capacity out of our facilities to keep up with this demand.”

Composite crosstie manufacturers expect growth to come in 2015 as they continue to focus on product return-on-investment and finding ideal situations for product placement.

In 2015, AXION International Inc. forecasts growth in what the company terms “specialty applications” or, as Cory Burdick, manager, ECOTRAX® Rail Division, explains, “installations where our ECOTRAX® line provides a combination of the greatest immediate and highest long-term value for railroads.”

He notes that installations such as in tunnels, bridges, road crossings, turnouts, and high-rot environments are the company’s primary focus.

“Our goal is to mitigate problems associated with maintenance, offering valuable solutions in critical areas, an evolution from being solely a material supplier to the industry, he says. “Our growth is directly related to that evolution and thus far in 2015, AXION has announced more than $10 million in orders and contracts.”

IntegriCo Composites says it is quadrupling its capacity with a new facility in Louisiana that is driven by what the company calls “intense demand” for its composite crossties and grade crossings. “The demand for our crossties is based upon our track record of delivering an environmentally friendly product that meets the high expectations of our customers,” says Matt McCooe, vice president of sales and marketing. “Equally important, our composite ties are priced so the return on investment for our customers, or the payback, is attained, in some cases, within the first 12 months.”