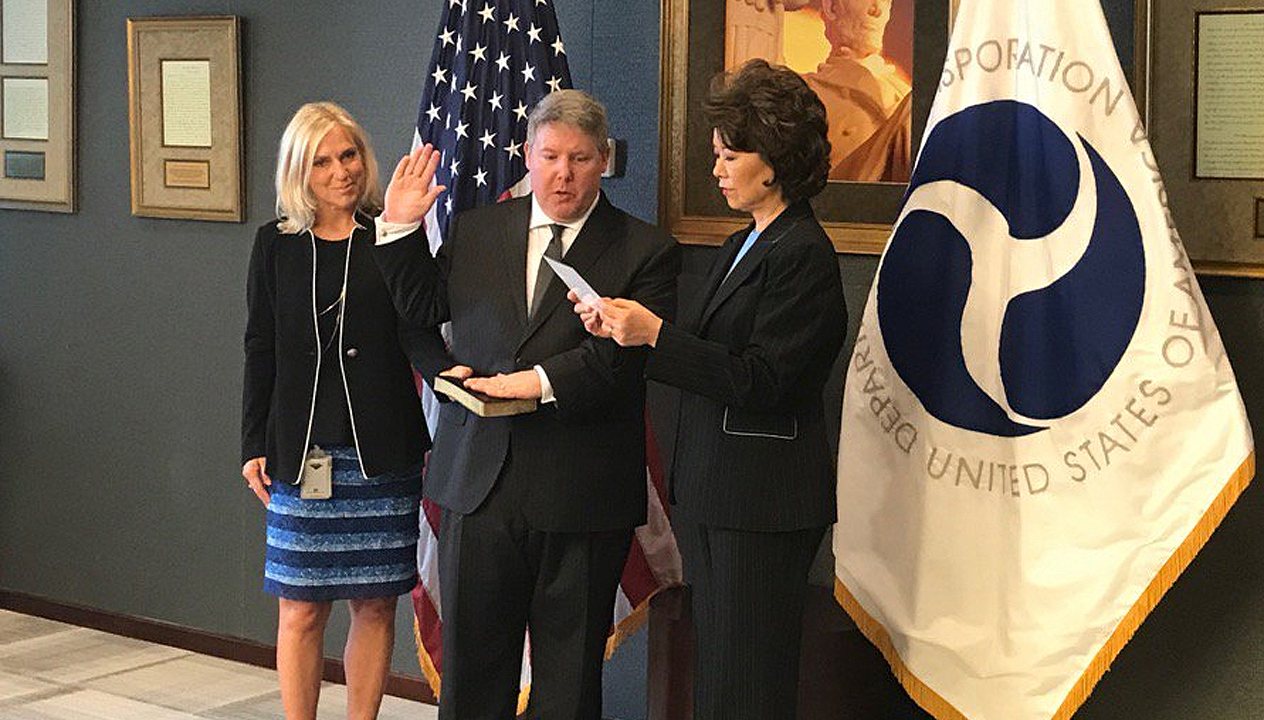 Heath Hall (center), shown here being sworn in as acting FRA Administrator, has resigned as the result of an ethics probe prompted by a Politico article.

Heath Hall, the acting administrator of the Federal Railroad Administration, the nation’s rail safety watchdog, resigned Feb. 11 amid allegations that he was working a second job as a public relations consultant.

Hall was appointed as Deputy Federal Railroad Administrator in June 2017, a post that did not require Senate confirmation. His appointment came after confirmation of President Trump’s pick for FRA Administrator, former Conrail executive Ron Batory, was held up by Democrats Chuck Schumer of New York and Corey Booker of New Jersey who were attempting to use it for leverage to release federal funding for the proposed Gateway rail tunnel project.

Hall was an acquaintance of Transportation Secretary Elaine Chao from her time with the Deputy DOT Secretary’s office and the Peace Corps.

Citing family issues, Hall had recently taken a leave of absence from FRA. But published reports said Hall subsequently appeared on at least two occasions in Mississippi media reports as a spokesman for the Madison County sheriff, where he has a public relations and political consulting firm. Politico reported the firm continued to receive payments from the county for its services from July to December, despite Hall’s pledge in a federal ethics form that it would remain “dormant” while he worked at DOT.

“We were unaware of the information that is being reported but those allegations, if they are true, are troubling,” DOT spokeswoman Marianne McInerney said in a statement Saturday. “Heath Hall has resigned his position at the Department effective immediately.”

Even while Hall was serving as deputy administrator, he was without a background in railroad operations and safety, as his appointment was intended to increase expertise in administration of federal transportation grants, which is secondary to safety at FRA.

Batory has not been sidelined, however, as he has been working as an aide to Chao. In fact, it is likely Batory will have input when the FRA’s new interim acting administrator, General Counsel Juan D. Reyes III, testifies on Positive Train Control (PTC) implementation on Feb. 15 before the House Rail Subcommittee.

There are two options to break the Schumer-Booker hold on Batory’s confirmation and allowing him directly to run the FRA.

The second option the so-called “nuclear option,” is cloture, which Senate Majority Leader Mitch McConnell (R-Ky.) – Chao’s spouse – can invoke, and did invoke in November 2017, to gain confirmation of Under Secretary for Transportation Policy Derek Kan. Kan’s confirmation similarly was blocked by Northeastern senators again looking for leverage to force DOT to release federal funds for Gateway.

Under Senate rules, cloture formally ends the Schumer-Booker hold. That process can require up to a week. While invoking cloture usually requires 60 votes – which Republicans do not have in the Senate – former Democratic Majority Leader Harry Reid of Nevada changed the cloture rule under certain circumstances to require just a majority (i.e., 51 votes). Once cloture was invoked, Kan was confirmed by a 90-7 vote.

Invoking cloture may be a last resort not hastily used as it further aggravates an already-poisoned congressional political atmosphere. But there is increasing concern that leaving the FRA without a qualified administrator is reducing the level of railroad safety and placing untold lives in jeopardy.

– with reporting by Frank Wilner in Washington