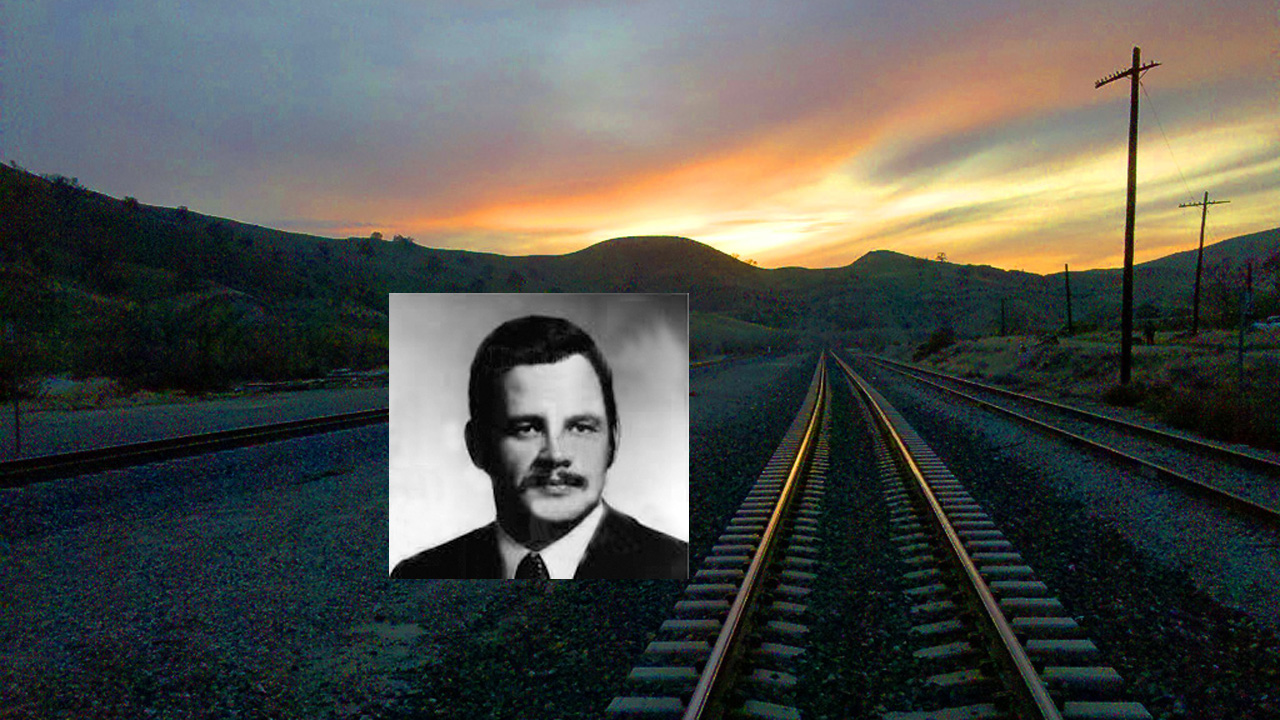 Richard Everett (Dick) Briggs, perhaps the most outsized personality in a railroad industry historically chock-a-block with outsized personalities, died Dec. 6, barely three weeks shy of his 81st birthday. He retired as Executive Vice President from the Association of American Railroads (AAR) in 1995.

A New Englander by birth, his forebears include nine Pilgrims who arrived in the New World in 1620 aboard the Mayflower; while forebear George H. Briggs fought with the 2nd New Hampshire Regiment during the Civil War.

During his 26 years at the AAR—almost all of it reporting to President William H. Dempsey, who allowed him virtual free rein—Briggs contributed some of the most persuasive arguments for economic deregulation, as delivered by the 1980 Staggers Rail Act; while his influence was evident in the overhaul in 1982 of the financially struggling Railroad Retirement System; and in the crafting of rail-favorable provisions valued at billions of dollars that were inserted into tax acts by Congress in 1981 and 1986.

In 1962, Briggs was recruited as an adviser to Interstate Commerce Commission (ICC) member and fellow New Englander William H. Tucker; although until an appropriate Civil Service slot opened, Briggs was designated a clerk-typist in the Office of the Managing Director.

Railroads during the 1960s were seeking to extricate themselves from the financially crushing yoke of providing mandated intercity passenger service. Briggs revived a previously ignored 1956 report by ICC statistics expert Howard Hosmer that calculated the annual loss in providing passenger service to be, updated for inflation to 2019, some $6 billion. What followed was congressional action culminating in creation of federally owned Amtrak.

Briggs’ reward was recruitment by the AAR in 1969, arriving just as Penn Central was hurtling toward insolvency. He was assigned to the AAR-formed America’s Sound Transportation Review Organization (ASTRO) to help create a fact-based campaign in support of economic deregulation. He reported to former Sen. George A. Smathers (D-Fla.) and Robert W. Blanchette, the latter soon to be a Penn Central bankruptcy trustee, later President Reagan’s Federal Railroad Administrator and then AAR’s chief legal officer.

Swift advancement followed at AAR—from Senior Financial Analyst to Director of Public Affairs to Vice President for Economics and Finance. He held the latter two posts simultaneously, and was the AAR’s principal witness before the ICC in rate cases.

“His intelligence was intimidating without being necessarily intended,” reflects economist Harvey A. Levine, who succeeded Briggs in June 1979 as the AAR’s chief economist, arriving from the R.L. Banks & Associates consultancy, whose clients were predominantly shippers. Briggs cherished diversity, a reason he later said for favoring Levine’s shipper background over candidates from major railroads.

On the desk he inherited from Briggs, Levine found a two-foot stack of statistics and verified statements being prepared to justify an ICC-requested general rate increase to recover cost inflation. In building the public policy case for economic deregulation, Briggs initiated a practice of publicizing the height and weight of the required submissions.

As was Commissioner Tucker, Briggs was a Democrat, and took a nine-month sabbatical from the ICC beginning in June 1964 to serve as Director of Research to the New Jersey State Democratic Committee. Few knew Briggs’ political leanings, however, as he was known to speak “Democrat” when among Democrats, “Republican” among Republicans, and always about railroads, the consequences of excessive economic regulation and their need for revenue adequacy.

What Briggs most had in common with former Boston trial lawyer Tucker—an 82nd Airborne Division parachutist who participated in the D-Day invasion and later was wounded during the Battle of the Bulge at Bastogne, Belgium—was a pugnacious personality. Briggs once jokingly threated to “clock” a news reporter who called him “pugnacious” in print, but the reality is he practiced a deep-seated empathy for even those with whom he was at professional odds.

Briggs and Tucker were said to have fully bonded following a fist fight in the hallway outside Tucker’s ICC suite, which neither denied. It was “schoolboy” stuff, as Tucker, a private pilot owning a small plane, frequently invited Briggs aboard for flights to Tucker’s home on Cape Cod.

A Jan. 18, 1967 description by The New York Times of Tucker being an “iconoclast” is owed to Briggs, as the article’s focus was a 38-page Tucker dissent—largely ghost-written by Briggs—to an ICC majority decision that was but four-pages long.

So strong was Briggs’ conviction of no substitute for victory, he maintained a feverish focus on the most minute of details. His favored venue for developing and vetting strategy was barrooms, where he often held court until 2 a.m., with the team expected back in the office hours later—Briggs soon after checking on progress made on ideas discussed.

Despite being height challenged, Briggs played varsity baseball at Princeton, and traveled to Baltimore when his beloved Boston Red Sox were in town—always with some AAR team members in tow. Former AAR Vice President Craig Rockey may never forget a cranial lump obtained while obligatorily taking notes as Briggs thought aloud. When a foul ball ricocheted off an upper-deck façade directly into the back of Rockey’s skull, Briggs continued his verbal thought, with Rockey continuing his notetaking as if nothing occurred.

There were no defections from Briggs’ inner circle. To partake of the comradery was akin to joining the celebrated creative writers, poets and wits at the legendary Algonquin Round Table. For years, Briggs hosted his own round table on St. Patrick’s Day in the basement of Kelly’s Irish Times bar, adjacent to the AAR’s then-offices near Capitol Hill. The events drew a who’s who of lobbyists and congressional staff—of all political stripes—each an admirer of the convivial Briggs, whose method of storytelling was said to outshine even the best of Irish tradition.

The Irish Times also was a favored venue of former Senate Finance Committee Chairman Bob Packwood (R-Ore.), where a wall plaque commemorates tax bills whose outline was created there. Frequently sitting at the Packwood table, over pints of Guinness, was Briggs, a self-taught tax expert who helped to devise one of the most significant rail-favorable tax bill provisions in history—the 1981 Economic Recovery Tax Act, which delivered to railroads, through accelerated depreciation, a $2.5 billion cash windfall that had more to do with revitalization of a financially moribund rail industry than the economic deregulation provisions of the year-earlier Staggers Rail Act.

With Briggs, there was no organizational hierarchy. All capable of contributing intellectually were peers in his eyes. So often did he adjust the lineup of staff talent assigned to projects that it was common for him to begin a conversation as if the listener had been present at meetings never attended.

Sound bites were a Briggs specialty. When the captive shipper lobbying group Consumers United for Rail Equity (CURE) described as “modest” its legislative push for Staggers Rail Act revisions, Briggs termed it “as modest as Xaviera Hollander, as subtle as Joan Rivers and as close to minor reforms as was the Third Reich.”

He began a November 1973 talk to a Fertilizer Industry Roundtable, “While preparing my remarks for today, I ran across an item which pointed out that Lincoln’s Gettysburg Address contains 266 words. The Ten Commandments contain 297. And the Bill of Rights, 557 words. My remarks contain about 3,000 words. I make this comparison so you will realize how important my message really is.”

When American Trucking Associations President Thomas J. Donohue threatened to join rail reregulation advocates in response to the AAR’s push that longer and heavier trucks fully pay their highway cost responsibility, The Washington Post of Sept. 27,1990 quoted Briggs: “It’s sort of like a rabid dog reaction. You don’t see us going around trying to close down truck stops because they’re centers for drug-trading.” Donohue later was elected to the Union Pacific board of directors, and now heads the U.S. Chamber of Commerce.

Integrity was a Briggs trademark. When named in 1987 as the industry’s representative to the congressionally created Railroad Accounting Principles Board to help develop costing principles for rail rate regulation, Briggs advocated—as do rail shippers—use of original or predecessor costs, rather than acquisition costs, to value railroad assets so as to avoid double-counting for inflation in calculating revenue adequacy. Otherwise, Briggs said, “Shippers which have paid once for the impact of inflation could then be called on to pay twice for the same escalation in values.” Briggs foresaw the coming of acquisition premiums, such as occurred with the CSX-Norfolk Southern purchase of Conrail, and of BNSF’s acquisition by Berkshire Hathaway.

Dick Briggs never ran a railroad nor a railroad association. What he did was provide America’s railroads, during years they needed it most, with extraordinary intellectual stimulation, uncharacteristically clear insight, insatiable pursuit of truth and success, uncommon talent to inspire, and an exemplary content of character. He was, indeed sui generis.

White, now retired, first met Briggs in 1969 at, of course, a bar, and soon was recruited from a newspaper job in Roanoke, Va., to join Briggs, Blanchette and Sen. Smathers in the ASTRO project to craft speeches, policy papers and engage the media. Although White later departed ASTRO for Southern Railway employment, he returned to the AAR at Briggs’ request to be the AAR’s principal speechwriter, and to assist journalists in their understanding of railroad operations and policy positions.

A yet-to-be scheduled lobster fest in Dick’s honor is planned for August at the family home in Amesbury, Mass., said Dick’s brother Lloyd, a former West Pointer; an 82nd Airborne Division paratrooper as was Commissioner Tucker; and whose Army officer commission was signed by Army Secretary Stephen Ailes—another Princeton graduate, who later was AAR President ahead of William H. Dempsey. Dick’s ashes will be scattered over Lake Champlain, where he spent summer vacations fishing. “He was a fish whisperer,” Lloyd said. “We spent so much time in the same boat where I never caught a fish, but Dick kept reeling them in.”