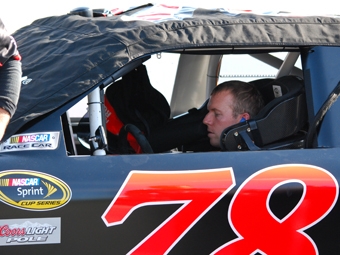 Smith brought home a 17th-place finish in last Sunday’s Coca-Cola 600.   It was his fourth top-20 finish in as many starts at NASCAR’s longest race, contested at Charlotte Motor Speedway.   Smith’s tenacity behind the wheel paid off as he gained three spots in the Sprint Cup driver point standings, moving from 26th to 23rd with one-third of the 36-race schedule completed.

“We hung in there and fought for everything we got tonight,” said Smith after finishing the grueling race. “We had some handling issues, which is expected in this endurance race that starts in daylight and ends under the lights. There were a few pit stops I wish we could have back, especially the one when I overshot my pit box. Overall, it was a decent points race for us and it was nice to pick up a few spots in the standings.”

Recent performances by the Furniture Row Racing team lifted Smith’s spirits as the NASCAR Sprint Cup Series tour heads north for a three-race swing in Delaware, Pennsylvania (Pocono) and Michigan.   “I am encouraged by how we have bounced back from a recent slump that included a 40th-place finish in Talladega due to a mechanical problem,” noted Smith. “Since then, we posted results of 14th in Darlington, 12th in the Sprint All-Star Race, and 17th at Charlotte.” Smith has posted top-10 qualifying efforts in his prior two outings.

“We’re not satisfied, but our outlook is much brighter than it was three weeks ago,” Smith remarked

The FedEx 400 benefiting Autism Speaks will be televised on FOX, beginning at 12:30 p.m. EDT.