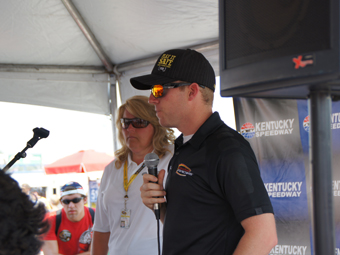 The freight railroad industry’s first venture into a key sponsorship with a race team in NASCAR’s top-tier Sprint Cup Series has concluded for this year on a positive note.

CSX and Furniture Row Racing wrapped up their six-race “Play It Safe Around Railroad Tracks” 2012 sponsorship program at Kentucky Speedway on June 30 at the Quaker State 400. The race team, driver Regan Smith, and sponsor CSX feel the program was successful, and CSX is evaluating what the next steps will be .

“It has been a wonderful experience, and Regan Smith is a natural from a spokesman standpoint,” said CSX Director Community Affairs and Safety Cliff Stayton. “He has been an excellent spokesperson for us, and has been able to get our message out there to Play It Safe around trains and railroad tracks. The number of people we’ve been able to reach has been exactly on spot for us, and we look forward to continuing this program.”

Smith was credited with a 33rd-place finish in the Quaker State 400—a solid performance spoiled by being in the wrong place at the wrong time at Kentucky Speedway.   While running in 14th place on Lap 209 of 267, Smith hit a large oil slick that was dumped on the track by a blown engine in Ryan Newman’s No. 39 car, which was positioned directly in front of Smith’s No. 78 Furniture Row/CSX Play it Safe Chevrolet.   As soon as the tires on Smith’s car caught the oil in Turn 2, it slid violently and slapped the concrete wall, causing major damage to the right-front side of the car.

“I was right there with Newman,” said Smith. “I saw it, but there is not much you can do. I went sideways as soon as I hit the oil. It was unfortunate because we had a good car. In fact, we were getting better on every run and I truly felt we had a good shot at a top-10.”

Smith added, “We made good adjustments and our pit crew was awesome, they had some incredible pit stops. While I am deeply disappointed, there were plenty of positives about our performance.”   Smith was able to drive the crippled car to the garage, where the No. 78 crew worked at blazing speed to make the necessary repairs so Smith could return to action to gain one available position in the final running order.

“We all experience these unlucky streaks and we can’t look back and play the what-if game,” said Smith. “I thought we made progress and need to build on this performance. The luck factor will eventually turn in our favor and we’ll catch our breaks.”

No doubt, Regan Smith and the Furniture Row Racing organization have what it takes to produce excellent results. At Pocono on June 10, for example, Smith posted his sixth top-10 qualifying effort of the season, claiming the seventh starting position for the Pocono 400. Smith ran in the top-20 for virtually the entire race and finished 16th, his seventh top-20 of the season. At Michigan International Raceway, he qualified 12th at a speed of 200.725 mph, one of 19 drivers in the 43-car field to surpass 200 mph. It was Smith’s fastest qualifying effort of his career.

In 2013, the No. 78 Play It Safe Chevrolet is expected to return with a new body style and the familiar “I Brake For Trains” graphics on the car and pit box. Regan Smith should once again be delivering the railroad’s safety message to the public. If all goes as anticipated, this website, sponsored by PTMW, Inc., will once again be bringing the action right to your desktop, laptop, or mobile device.