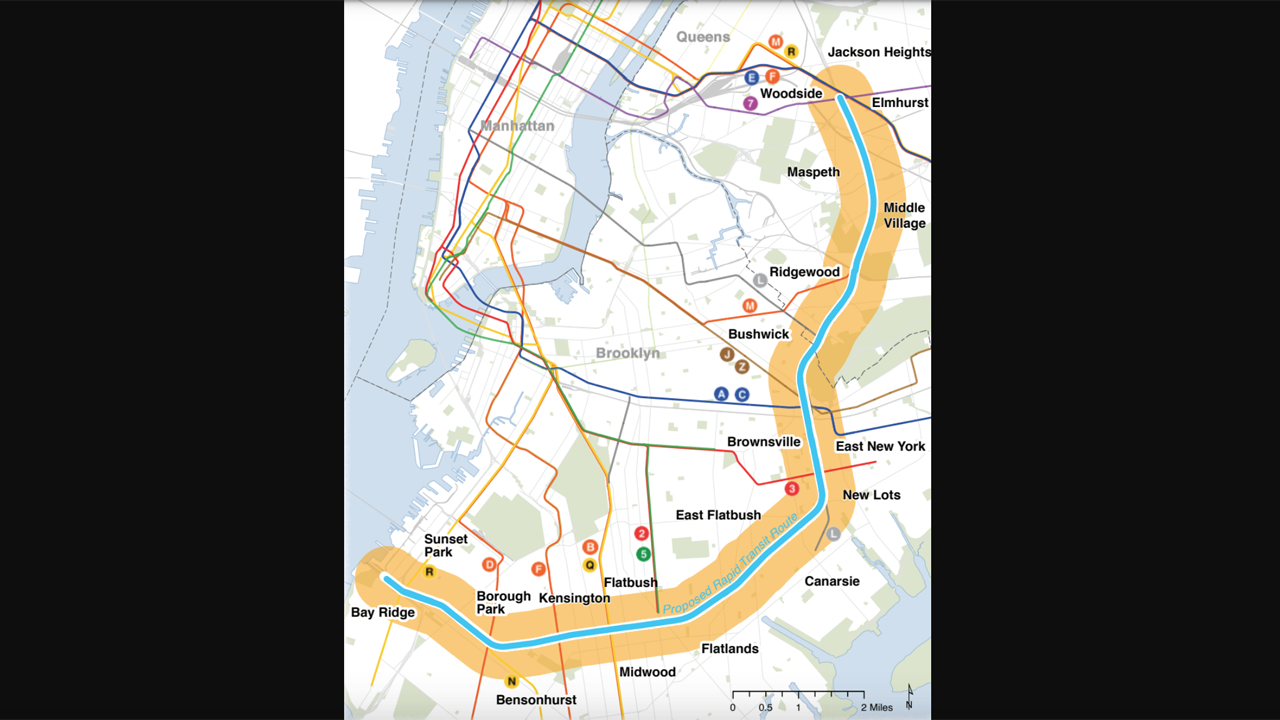 A proposed 14-mile “Interborough Express” transit service could use the existing Bay Ridge Branch freight line—owned by MTA Long Island Rail Road and operated by New York & Atlantic—and CSX’s Fremont Secondary line to link communities in Brooklyn and Queens that are not currently served by rail.

During her first State of the State address on Jan. 5, Gov. Hochul announced plans for the 14-mile Interborough Express. She and MTA on Jan. 20 released a study on the service, which would use the existing Bay Ridge Branch freight line—owned by MTA Long Island Rail Road (LIRR) and operated by New York & Atlantic—and CSX’s Fremont Secondary line. (Download study below.)

The study indicates that it is “physically feasible to accommodate passenger traffic alongside the existing freight rail traffic; that there is significant demand; and that Bus Rapid Transit, Light Rail, and conventional Heavy Rail” are all potential service modes, according to MTA. (“Heavy rail,” according to an industry source close to the project, would not be rapid transit.)

Interborough Express could serve close to 900,000 residents, along with 260,000 people who work in the area. It is slated to offer connections to LIRR commuter rail service and as many as 17 MTA New York City Transit subway lines.

MTA will now begin the required state and federal environmental review. Those processes as well as other forthcoming studies will determine the number and location of stations along the 14-mile corridor as well as project cost.

“This project would smartly repurpose existing infrastructure to add mass transit and create access to jobs, education and opportunity for so many residents of Queens and Brooklyn,” MTA Chair and CEO Janno Lieber said on Jan. 5. “I applaud Gov. Hochul’s leadership, and we are enthusiastic to work with her, and federal and state partners to advance the Interborough concept.”

“Regional Plan Association is thrilled that Gov. Hochul and the MTA have completed their initial study of the Interborough Express, which builds off RPA’s Triboro plan first proposed in 1996,” RPA Executive Vice President Kate Slevin said on Jan 20. “The Interborough Express is a crucial project for advancing New York’s transportation equity, economic development, and climate goals, as the route will connect many of the city’s car-dependent transit deserts with 17 subway lines and the Long Island Rail Road. By completing the first direct transit connection between Brooklyn and Queens in generations, the Interborough Express is a monumental step forward in moving away from our Manhattan-centric transit system toward a more comprehensive model that will benefit all residents. Throughout public and private meetings with elected officials, community, and business organizations over the past five years, we have seen tremendous support for this project.”

Gov. Hochul on Jan 5 also directed the Port Authority of New York and New Jersey to complete an environmental review for the Cross Harbor Rail Freight Tunnel, which could potentially link with the Bay Ridge freight line.