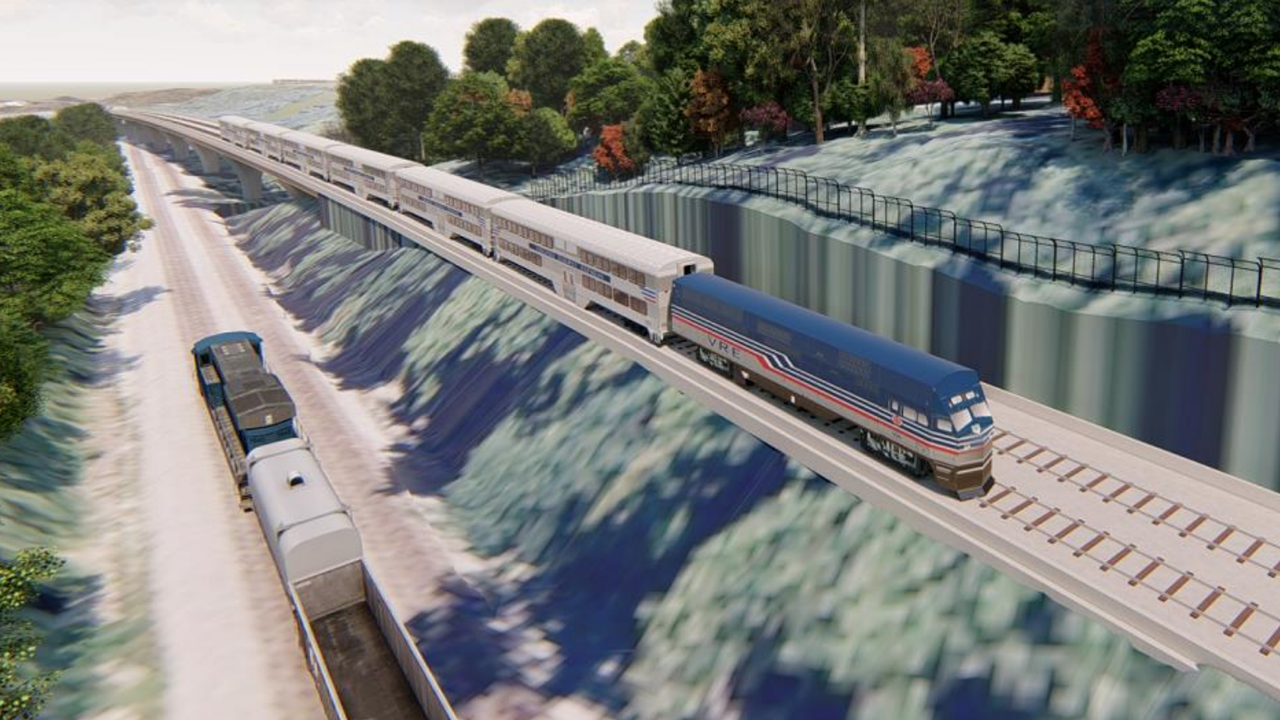 The “Transforming Rail in Virginia” initiative, which Gov. Ralph Northam unveiled in December 2019, will “expand Amtrak and VRE [Virginia Railway Express commuter] rail services, create a pathway for the separation of freight and passenger rail in Virginia, and preserve future rail corridors.”

The “Transforming Rail in Virginia” initiative, which Gov. Ralph Northam unveiled in December 2019, will “expand Amtrak and VRE rail services, create a pathway for the separation of freight and passenger rail in Virginia, and preserve future rail corridors.” It covers:

• Construction of a $1.9 billion double-track passenger-rail-dedicated bridge over the Potomac River. Virginia-owned, it will be built adjacent to the existing CSX-owned and operated Long Bridge, the only freight and passenger rail bridge connecting Virginia and Washington, D.C.

• Acquisition from CSX of 386 miles of railroad right-of-way and 223 miles of track at a cost of $525 million. This includes “half of the rail corridor right-of-way from Washington, D.C., to Petersburg, Va., the full extent of CSX ownership from Petersburg to Ridgeway, N.C., and the entire corridor from Doswell to Clifton Forge [Virginia],” according to the Governor’s Office. With the exception of Ashland, Va., “the right-of-way from Washington, D.C., to Richmond is wide enough to construct a four-track corridor, with two tracks dedicated to passenger rail, and when fully built out will allow separate passenger and freight movement.”

• Additional infrastructure improvements in the commonwealth, totaling more than $1 billion.

According to the Governor’s Office, over the next 10 years, the initiative will:

• Double the number of Virginia-supported Amtrak trains, providing nearly hourly service. The Commonwealth and Amtrak are entering into a long-term partnership for six new state-supported daily round-trips, and Amtrak will serve as Virginia’s exclusive provider of intercity passenger rail along the I-95 corridor for at least 30 years. Amtrak has committed $944 million to the “Transforming Rail in Virginia” initiative.

• Increase VRE service by 60%. “Through our funding agreement with the Commonwealth, VRE anticipates providing $200 million toward major infrastructure projects for the ‘Transforming Rail in Virginia’ initiative,” said VRE CEO Rich Dalton. “That, combined with more than $800 million in improvements spelled out in VRE’s six-year Capital Improvement Program, will bring our contribution to rail improvements in Virginia to more than $1 billion. As these projects come on line, VRE will be able to expand service by as much as 60% along the RF&P corridor.”

• “Lay the foundation for a Southeast High Speed Rail Corridor; preserve an existing freight corridor between Doswell and Clifton Forge for future east-west passenger service; and create the potential to expand rail to all parts of the Commonwealth.”

“Northern Virginia is at the crossroads of the Mid-Atlantic rail network, where the existing Long Bridge is the only rail bridge connecting Virginia to Washington, D.C., creating a choke point for rail traffic between the Southeast and Northeast,” said Congressman Don Beyer, U.S. Representative for Virginia’s 8th Congressional District. “I worked with a coalition of my colleagues in Congress to authorize and fund a new Long Bridge, an effort that also helped the commonwealth secure access to the federal land needed for construction of the new Long Bridge. This project is estimated to bring nearly $6 billion annually in benefits to the region by 2040.”

“CSX is pleased to finalize this innovative agreement with the commonwealth of Virginia that will benefit both passenger rail service and our freight rail customers,” CSX President and CEO James M. Foote said. “CSX appreciates the collaboration with Virginia Department of Rail and Public Transportation and the support of our federal partners, and we look forward to implementing the agreement that addresses commuter traffic challenges in the I-95 corridor while preserving and enhancing our ability to grow freight volumes safely and efficiently.”

“This initiative represents a historic achievement in expanding and improving the performance of rail transportation,” Virginia Secretary of Transportation Shannon Valentine said. “Together, we are creating a path toward separating passenger and freight rail and building a vital link in our national rail network between the Northeast and Southeast corridors.”