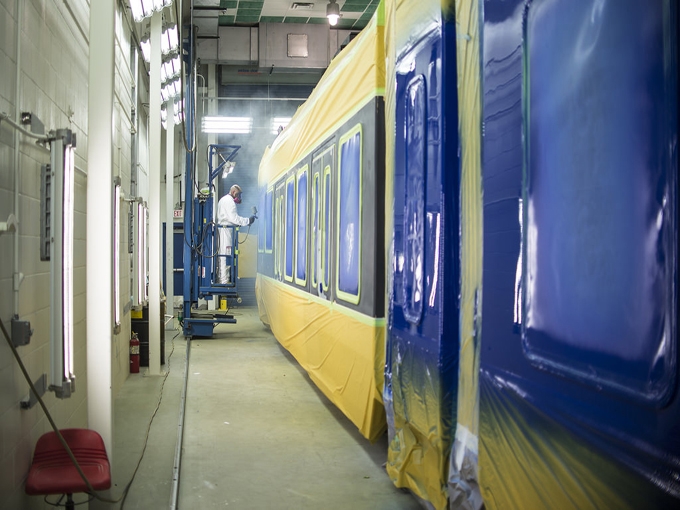 Bolstered by the success of the Green Line LRT, Metro Transit is setting ridership records.

This past June marked one year since public transportation operator Metro Transit, which covers the Twin Cities area, opened its $957 million, 11-mile Central Corridor LRT, the Green Line, connecting Minneapolis and Saint Paul. The Green Line is Metro Transit’s second LRT line after the Blue Line, which when it opened in 2004 marked the beginning of Metro Transit’s expansion into rail, a half-century after the last Twin Cities Rapid Transit streetcars were taken out of service.

Having served more than 11.1 million riders in its first year and generating about $3 billion in development along the corridor since construction on the line first began, Metro Transit General Manager Brian Lamb says the Green Line is about more than numbers.

Saint Paul Mayor Chris Coleman added, “The Green Line has proven to be what we always knew it would be: a key part of a first-class transportation system that provides access and opportunity throughout the corridor, our city and our region.”

• Combined ridership on bus routes 16, 94 and the Green Line is double what it was when service was provided by buses alone.

• In March, the line’s East Bank Station reached one million total boardings—the first station to do so. Overall, in 2014, Metro Transit light rail, regional/commuter rail and buses provided 84.5 million passenger trips, the highest ridership tally since 1981. The ridership figure reflects an increase of more than 3.1 million rides, or 3.9%, compared to 2013, according to the agency.

The Blue Line, connecting Minneapolis to Minneapolis-Saint Paul International Airport and the Mall of America, accounted for almost 9.5 million rides, bringing the number of rides since it began operations to nearly 100 million.

The Northstar Commuter Rail Line, operated with a fleet of 18 Bombardier Bi-Level coaches and cab cars and six Wabtec/Motive Power MP36PH-3C locomotives, accounted for more than 721,000 rides. Providing service between Minneapolis and Big Lake, Minn., along a BNSF right-of-way, Northstar offers five round-trips in the peak direction, one reverse commute round-trip on weekdays, and three round-trips on weekends. Currently, there are no expansion plans for the system, which opened in 2009. Metro Transit spokesman Howie Padilla adds, however, that there always has been a desire to expand the service to Saint Paul. Additionally, he adds, that as opposed to last year, there have been hardly any complications with freight traffic on the right-of-way and the Northstar has been achieving a “95% or better” on-time performance rate.

Bolstered by the success of the Green Line and population growth in the greater Minneapolis-Saint Paul region, as well as by changing transportation preferences and expanded service, transit ridership in 2014 was up 3.5% across all providers in the seven-county Minneapolis-Saint Paul region. Total ridership in the region in 2014 was 97.7 million rides.

Construction on the $1.77 billion Green Line Extension, which will operate from downtown Minneapolis through the communities of St. Louis Park, Hopkins, Minnetonka and Eden Prairie, passing in close proximity to Edina, is scheduled to begin in 2017. Funded through a mix of federal, state and local sources, the extension will be part of an integrated system of transitways, including connections to the Blue Line, the Northstar Commuter Rail Line, bus routes and proposed future BRT transitways. The extension originates at Target Field Station, which serves the home of Major League Baseball’s Minnesota Twins and the NFL’s Minnesota Vikings, in downtown Minneapolis.

In August 2014, the Metropolitan Council received federal approval from the FTA to begin designing the extension, which will connect Minneapolis and the city’s northwest communities with the region’s system of transitways. It also will originate at Target Field Station. Service will begin in 2021, with nearly 27,000 boardings anticipated in 2030.

Metro Transit’s 27 Type I Bombardier LRVs (a Minneapolis-specific version of the Flexity Swift design) are currently undergoing complete refurbishment. New graphics are being applied to match the newer Siemens S70/Avanto Type II LRVs that were added to the fleet in 2012.

The refurbishment includes a rigorous cleaning to remove built-up residue. Lights and other components are being removed and rebuilt, and in some cases replaced, with sturdier equipment that will withstand years of all-weather service, Metro Transit says.

In 2010, Metro Transit negotiated a contract with Siemens to acquire up to 109 S70 LRVs, with the first vehicle arriving in September 2012. The initial order was for 41 vehicles: 31 for the Green Line and 10 to expand the Blue Line fleet, enabling that route to operate three-car trains more frequently. Options for additional vehicles were exercised about a year later as contingency funding from the Central Corridor project became available. The Siemens LRVs are mechanically but not electronically compatible with the Bombardier vehicles, so while the two LRV types are able to operate at the same time and either type would be able to push a malfunctioning unit of the other type, multiple-unit consists are only assembled of one type.

Using service-level-driven demand planning techniques enabled by SmartForecasts, Metro Transit’s material planners “know the proper amount of inventory to carry for all parts in all warehouses to meet its challenging service level,” the company says. “This will be especially important for intermittently demanded items, which cannot be forecasted using traditional planning methods. Benefits include more effective and less costly resource allocation and increased parts availability to sustain ongoing operations.”

The Northstar system is one of many railroads operating in frigid temperatures during the winter months that utilize HOTSTART APUs (auxiliary power units). Says Director, Northstar Commuter Rail John Paul Vanaska, “It’s an important system to have because it prevents the train’s engines from freezing and helps ensure that they will start.”

HOTSTART offers two locomotive-specific electric-powered engine-heating systems. One is a dual-fluid heater that maintains prime-mover coolant and oil temperatures during layover periods. The other is a coolant-only model. HOTSTART also manufactures a diesel-powered APU, a self-contained system that runs off the locomotive’s diesel fuel supply.