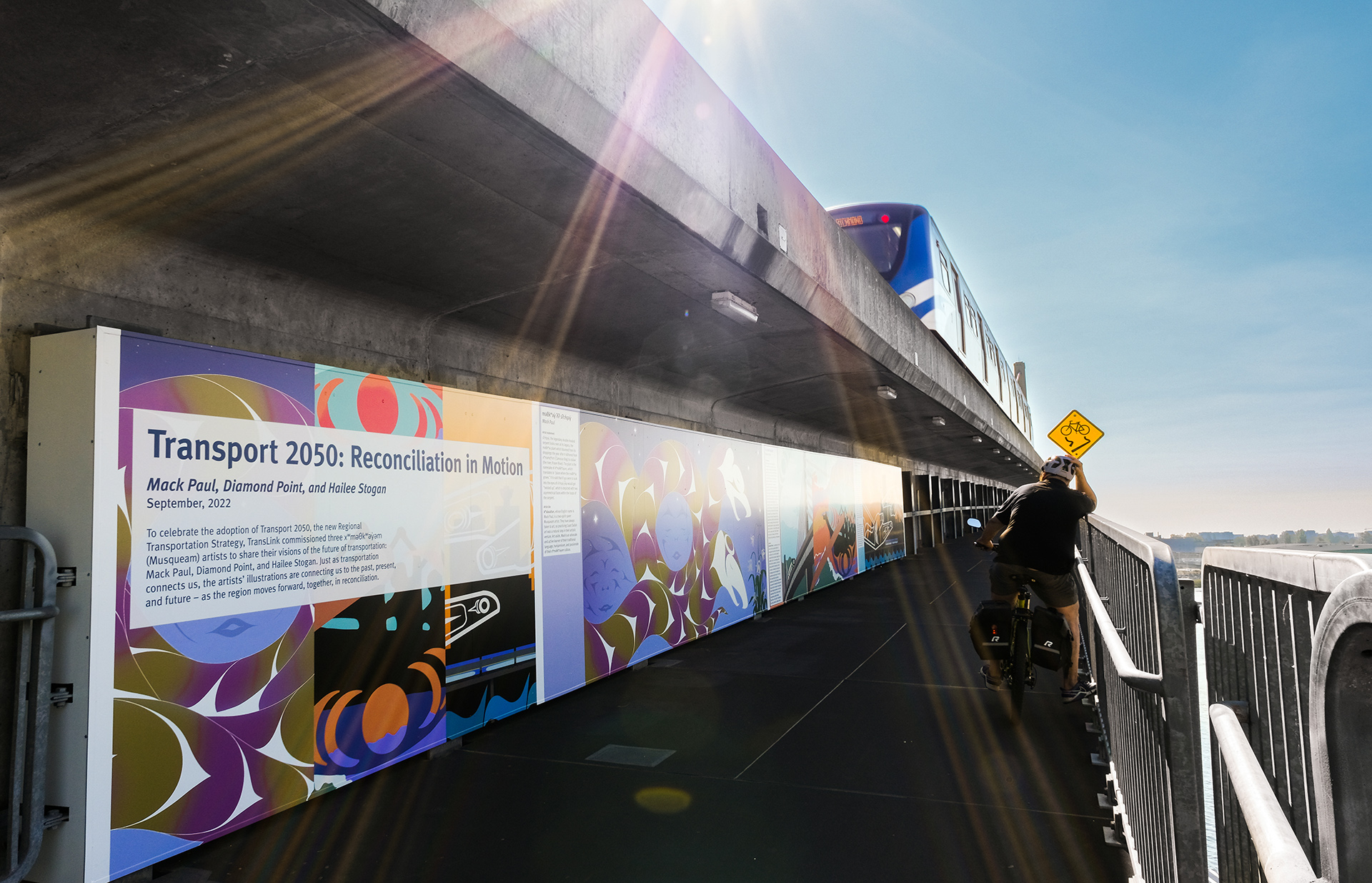 TransLink has completed installation of three murals on a section of the Canada Line Bridge, which spans the Fraser River on the unceded and traditional territory of xʷməθkʷəy̓əm (Musqueam Indian Band), connecting Richmond and Vancouver.

As part of Transport 2050, TransLink said it teamed with xʷməθkʷəy̓əm to put out a call for Indigenous art “to celebrate the future of transportation.” Three xʷməθkʷəy̓əm artists were selected: Mack Paul, Diamond Point, and Hailee Stogan. Each artist created an original digital mural, roughly 17-feet long and seven-feet high, “reflecting the past, present and future of the region, through the lens of colonialism and reconciliation,” TransLink reported. “Reconciliation is a priority at TransLink and a key part of its regional transportation strategy.”

“It’s mind-blowing to think I’ve had the privilege to work on this project with TransLink,” Grade 12 artist Hailee Stogan said. “The topic of truth and reconciliation has been a large movement in Canada and, being so young, I never felt like my voice and opinions would be heard. By creating my piece of art for this project, I’m able to express these feelings without words.”

TransLink CEO Kevin Quinn said in a statement that the National Day for Truth and Reconciliation (Sept. 30) serves as a reminder that “reconciliation is an ongoing journey into the future and not a destination. By building respectful relationships with Indigenous Nations and urban Indigenous Peoples and taking action to improve transportation for all Indigenous Nations, we’re striving to help the process in a meaningful way.”

“For three-quarters of a century, the CTA has connected customers and communities to work, to school, to activities and to every vibrant Chicago neighborhood,” CTA President Dorval R. Carter, Jr. said. “This is an important milestone worth celebrating in appreciation for our customers, as well as our dedicated, hard-working employees, who over the last 75 years have kept CTA on track in providing the most equitable, accessible and affordable public transportation in the country!”

Through this approval, the FY 2023 Capital Investment Plan will allocate $5 million to the project for public outreach, updated design, confirmation of the proposed alignment, and continued coordination with Norfolk Southern for use of its existing rail line, according to the transit agency. CATS, a department of the city of Charlotte, is governed by MTC and offers light rail, streetcar, bus, vanpool and paratransit services.

“Transit is at a pivotal moment; we have an unprecedented opportunity for federal funding that can advance the Charlotte landscape,” CATS CEO John Lewis said. “It’s crucial for CATS to utilize this opportunity and plan ahead as the Charlotte region continues to grow.”

MDOT MTA has a new public service campaign to reduce the incidence of sexual harassment on transit. It focuses on educating the public on what constitutes sexual harassment and how it can be stopped, according to the agency, which operates Local Bus, Commuter Bus, Light RailLink, Metro SubwayLink, MARC Train and Mobility paratransit services. Ads are being deployed on railcars and buses in addition to social media. MDOT MTA is also launching a safety and security webpage that highlights resources; includes a reporting form for individuals experiencing harassment on an MDOT MTA transit vehicle or at an MDOT MTA stop or station; and identifies the “3Ds” (Distract, Delegate and Direct), which it calls strategies that bystanders witnessing harassment can use to help a victim.

Based on data and feedback collected from riders, the agency said it plans to refine and expand the campaign annually, as well as partner with local community-based organizations to share ideas and input.

“There is no place for sexual harassment on transit or anywhere else,” MDOT MTA Administrator Holly Arnold said. “We want everyone to know we take incidents of harassment seriously and are launching this campaign so that we can improve the overall experience for all who take transit.”

“At Metrolink, safety is foundational and at the core of all we do, each and every day of the year,” said Frank Castellon, Metrolink’s Chief Safety, Security and Compliance Officer. “As part of our ongoing efforts to maintain the highest standards of safety, we are committed to educating drivers and the public about the vital importance of being alert and avoiding dangerous behaviors around railroad tracks.”

Metrolinx reported on Sept. 29 that Black & McDonald has been awarded a contract to work on early upgrades at Finch Station to connect the approximately five-mile (eight-kilometer) Yonge North Subway Extension to existing TTC Line 1 service.

“We’re excited to bring a new partner on board to help us set the stage for major construction to begin,” Metrolinx Project Sponsor Stephen Collins said.

Work will include the installation of new heavy-duty electrical cables from an existing traction power substation on Hendon Avenue to Finch Station, and a new fire department connection near the intersection of Yonge Street and Hendon. Additionally, minor renovations and upgrades will be made to the electrical rooms inside Finch Station to accommodate the additional power cables.

Changes to the existing tail track area, beyond the subway platform, will prepare it to become part of the main subway line, according to Metrolinx. This involves extending the waterless sprinkler system from the existing service tracks through the tail tracks, along with new cables and other equipment that will link the future subway extension into existing communications and support systems.

Construction is slated to begin this fall.

New York Metropolitan Transportation Authority (MTA) has partnered with sandwich shops Katz’s Delicatessen and Alidoro to introduce the 1904 Sandwich, named after the year the first NYCT subway line opened to the public. In celebration of the subway’s 118th anniversary on Oct. 27, the sandwich is being sold at four of Alidoro’s shops in Manhattan from Sept. 29 through Oct. 31.

The sandwich is $14, but for $17 it is available for purchase as part of an MTA Away lunchbox deal, which includes a cookie and a bag of chips. Customers who purchase the MTA Away lunchbox deal may win one of 25 preloaded $50 OMNY cards or one of 50 $50 gift certificates to add to a smart device or contactless card.

Each sandwich is wrapped in a Massimo Vignelli-inspired subway map design that includes the MTA Away logo, an integrated Katz’s and Alidoro logo, an illustration of the subway stops of Alidoro’s locations, and a QR code directing customers to an About page of the 1904 Sandwich.

While the 1904 Sandwich is available in-store only and not available for delivery, it can be ordered for shipping nationwide.

MTA reported that it will not receive any proceeds from the purchase of a sandwich, which is being advertised across all Metro-North Railroad, Long Island Rail Road and subway platforms, and on trains and in terminals.

“A big thank you to Katz’s and Alidoro for helping the MTA find new ways to engage with New Yorkers,” MTA Chair and CEO Janno Lieber said.