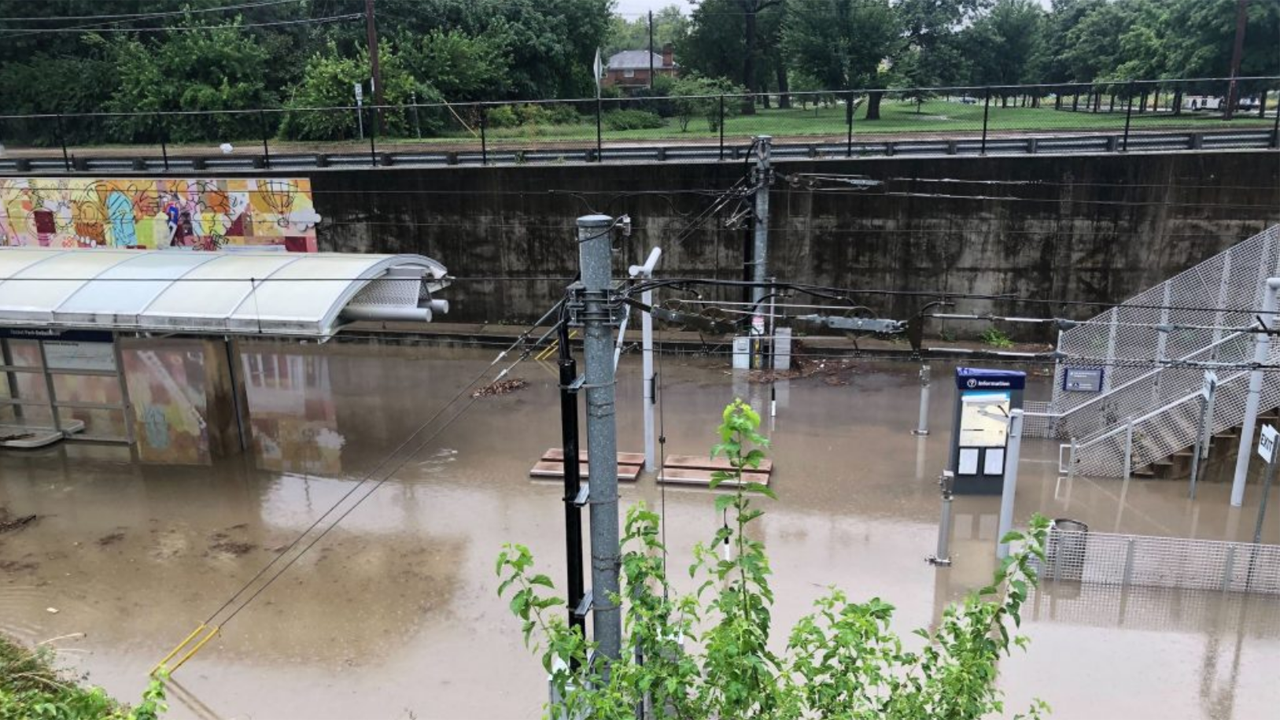 “The record rainfall in the St. Louis region is causing major service disruptions for MetroLink, and we are doing our best to keep to keep passengers moving,” Bi-State Agency’s Metro Transit is reporting on its website. (Photograph Courtesy of Metro Transit)

At Metro Transit in St. Louis, Mo., major light-rail service disruptions may last for weeks due to damage caused by flash flooding on July 26. Also, Southeastern Pennsylvania Transportation Authority (SEPTA) and Wawa have signed a naming-rights agreement for a new Regional Rail station that will open Aug. 21 as part of a multi-year project to restore rail service 3.5 miles west of Elwyn.

“The record rainfall in the St. Louis region is causing major service disruptions for MetroLink [light rail], and we are doing our best to keep to keep passengers moving,” Bi-State Development’s Metro Transit is reporting on its website.

Red Line MetroLink trains are unable to operate from the Central West End Station to St. Louis Lambert International Airport “due to flooding conditions on the tracks and potential flash flooding damage to MetroLink equipment, light rail tracks, network communications and signals, particularly at the Forest Park-DeBaliviere Station, which is the pivotal station where the Red Line and Blue Line connect in St. Louis,” according to Metro Transit (see map below). “The damage from this unprecedented flooding event is being assessed, and depending on the extent of the flood damage, it is possible that normal MetroLink service may not be restored for potentially two weeks or longer. One train stuck in the floodwaters at the Delmar Loop Station has sustained significant damage.”

“MetroLink Station Shuttles will remain in operation to transport MetroLink passengers by bus who are traveling between the Lambert Airport Terminal #1 and the Central West End Stations, and shuttles are transporting MetroLink customers between the University City-Big Bend and Central West End Stations,” Metro Transit reported. “Two single-car trains are currently operating between the University City-Big Bend Station and the Shrewsbury Lansdowne I-44 Station. MetroLink riders traveling through these areas should allow 60 minutes for their commutes for the bus shuttles.”

In addition, MetroBus service in the city of St. Louis and in St. Louis County is experiencing delays due to street closures and detours caused by the flooding.

“We will continue to update our transit customers on social media, our website and through email communications to the local media,” Metro Transit reported. “We ask for your patience with our operators and team members who are working long hours and doing their very best to provide public transit services to the region. We are facing the same issues that some residents, motorists and businesses are dealing with from damage from the record rainfall.”

Bi-State Development President and CEO Taulby Roach told St. Louis-based KSDK-TV that he’s requesting federal assistance through FEMA, which could mean up to $20 million toward repairs.

SEPTA reported on July 27 that its newest Regional Rail station would bear the Wawa company name thanks to a naming rights agreement. Wawa, based in Wawa, Pa., is a privately held firm that operates convenience stores in Pennsylvania, New Jersey, Delaware, Maryland, Virginia, Florida, and Washington, D.C. The Media/Elwyn Regional Rail Line will now be called the Media/Wawa Line to reflect the new terminus of service at 1490 W. Baltimore Pike in Wawa, Pa.

SEPTA has been working since 2018 to restore more than 3.5 miles of Regional Rail service west of Elwyn to the new Wawa Station, and is nearing substantial completion (see map below). SEPTA trains last served the area in 1986. The new Regional Rail extension is the SEPTA’s first since the Airport Line began operating in 1985.

The Wawa Station building will be fully ADA accessible with a pedestrian underpass and restroom facilities. It will feature a 600-space parking deck and signalized access to Route 1. The station will also connect with SEPTA Bus Routes 111 and 114.

The partnership with Wawa is SEPTA’s fifth major naming rights agreement since 2010. “As with the other agreements, this collaboration will further SEPTA’s commitment to generating new sources of revenue, which is critical to ensure the Authority can continue to recover from the pandemic,” SEPTA said.

“We are thrilled that Wawa is partnering with us to make its hometown station a vibrant part of our Regional Rail network,” SEPTA General Manager and CEO Leslie S. Richards said. “We look forward to launching this new service and improving transportation options for those living and working in Middletown Township, Chester Heights, and surrounding communities.”

“Wawa is thrilled to partner with SEPTA to re-launch the Media/Wawa Line and provide our friends and neighbors a convenient way to travel from Wawa, Pa., to Center City Philadelphia and all stops in between,” Wawa President and CEO Chris Gheysens said. “Located across from the Wawa Dairy that has been bottling and distributing milk for more than 100 years and adjacent to our home office campus, this rail line has meant a lot to Wawa and to our founding family throughout the years. We cannot wait to celebrate its return and look forward to being a part of new history through this new station.”

“The restoration of SEPTA service from Elwyn to the new Wawa Station will give Middletown Township a second train station for our vibrant township and provides an additional access to transportation for residents who live in, the business community who works in, and those who visit Middletown Township,” Middletown Township Council Chair Mark Kirchgasser said. “Wawa is a valued partner in Middletown’s past, present and future, and we are pleased that it has chosen to invest in this project for our residents.”