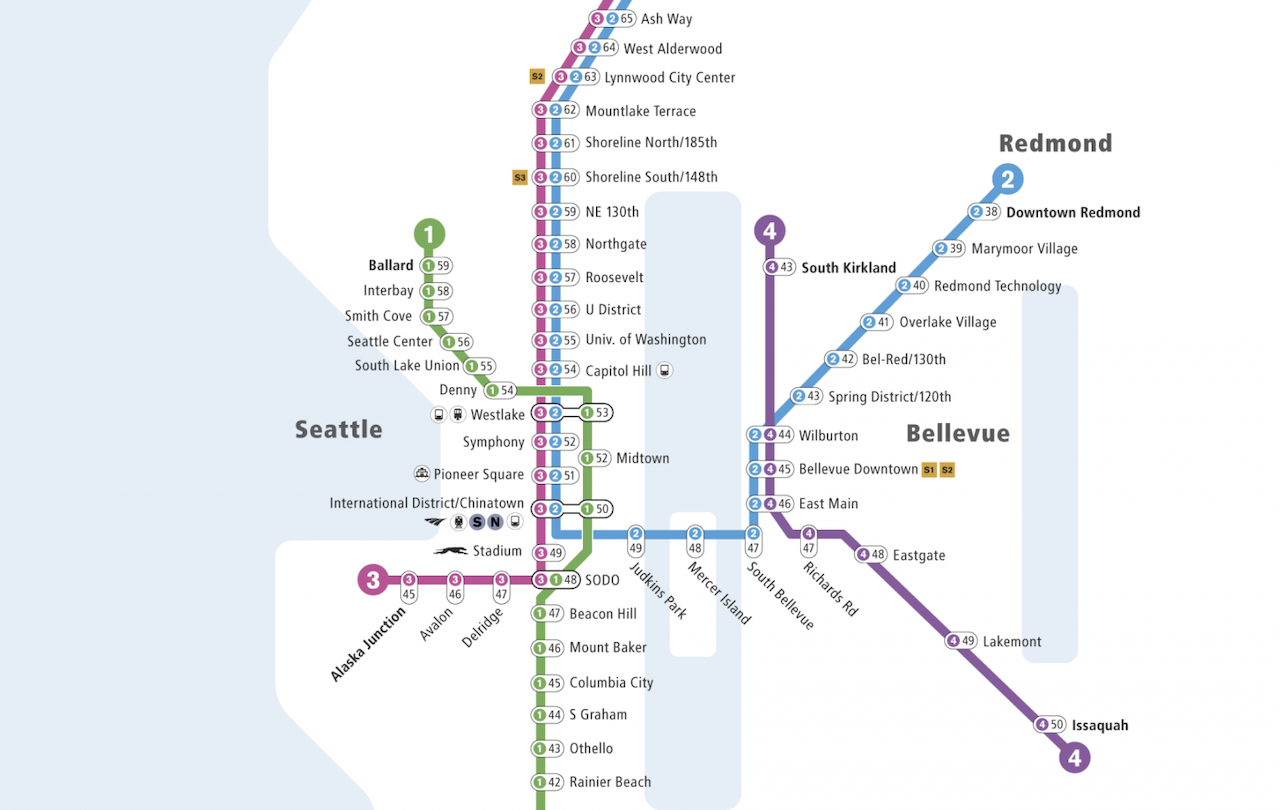 A portion of the preferred station stop map and numbering approach for the Link system. (Credit: Sound Transit)

According to a report by The Urbanist, Sound Transit will distribute a new station code system across its Link network “much like sequential numbering systems used for airport gates and major train station tracks and platforms” that will supplement regular station names, replacing the pictograms currently in place. This decision, according to The Urbanist report, follows a summer of testing and rider engagement that focused on three different station code options.

According to The Urbanist report, agency staff last week briefed Sound Transit board members on “the need for the changes and a preferred approach that will be rolled out in Link system expansions on the horizon.” Sound Transit staff, according to the report, are trying to address some unique problems with the change, including usefulness, scalability and meeting legal requirements.

According to The Urbanist report, Sound Transit is required under state law to “use some form of alternative station identification for Link” and is “mandated to incorporate signage into stations ‘that is easily understood by the traveling public, including, but not limited to, persons with disabilities, non-English-speaking persons, and visitors from other nations.’” The law, The Urbanist reports, also specifically states that signage “use distinguishing symbols or pictograms developed by the authority as a means to identify stations and may identify points of interest along the corridor for persons who use languages that are not Roman-alphabet based.”

According to engagement results, and as reported by The Urbanist, “pictograms are neither popularly used nor highly useful among surveyed Sounding Board members and limited-English proficiency (LEP) focus groups. Less than 20% of Sounding Board members and less than 10% of LEP participants said that they use pictograms. Worse, most participants—including three-quarters of the target audience (LEPs)—said that they did not find pictograms helpful. Conversely, most participants said that station codes were useful and gave incredibly high marks in intuitiveness (75% to 80%), helpfulness (78% to 90%), and ease of use (75%). In fact, participants in the LEP focus groups quickly picked up on how the maps worked and were able to make successful transfers in travel scenarios using station codes. Among people with visual disabilities, there wasn’t as clear a preference for approaches, but Sound Transit did receive strong feedback on using a braille format on tactile signage that would be very clear about the information being presented.”

Sound Transit, The Urbanist reports, will keep universal icons in its media and signage like airplanes and ferries for airports and ferry terminal connections, adding that Sound Transit’s preferred approach is Option 2B, a bubble system that gives each station one to three stop codes.

Each code, according to The Urbanist, is “a three-digit number with the first number identifying the line serving the station and the last two digits specific to a station. The latter two numbers can also be thought of as a base number. For instance, Northgate would get the base number of 58 and will be served by the 2 and 3 Lines. Therefore, the station would have two stop codes: 258 and 358. Using three-digit numbers is an issue that the agency looked into given that the local and regional bus system often uses three-digit numbers for bus routes, so avoiding confusion is a design priority.”

According to The Urbanist report, “because of the sequential nature of the stop code system, riders will be able to more easily navigate the direction they want to go or even know how many stops to go. On the 2 and 3 Lines, higher numbers correlate with going northbound whereas lower numbers correlate with going southbound (and eastbound or westbound where they branch). Riders can also mathematically calculate that going from stop 155 (University of Washington Station) to stop 150 (International District/Chinatown Station) will be five stops. However, the stop calculation feature does have some complexities with it since base numbers are sometimes reused by entirely different stations or are skipped in certain circumstances by branch lines. The numbering plan is centered on the regional hub station: International District/Chinatown Station.”

The question on whether Tacoma’s T Line streetcar will get station codes remains as agency staff, according to The Urbanist report, said “it’s not required for the line and pictograms are not currently used on it, but the design concepts did build in potential for the line to work seamlessly with the 1 Line.”

According to The Urbanist report, “riders can expect to see station codes rolled out and pictograms removed in the upcoming East Link and Lynnwood Link expansions. Those project openings are trending to late 2024 due to construction delays, but there are efforts for a partial East Link opening next year and the idea has support from Claudia Balducci (Sound Transit boardmember and chair of the Systems Expansions committee) and interest from Sound Transit CEO Julie Timm.”

According to a WCNC Charlotte report, CATS, which spent the last month engaging riders to get feedback on its new transportation center, is moving into the next phase of building the new transportation system, which includes finalizing the design. CATS presented its findings to the Transportation, Planning and Development Committee on Monday, Nov. 7 (presentation video below).

“These last few weeks were really about hearing from people who use the bus and light rails, as well as the bus drivers; CATS leaders aimed to learn more about their needs when it comes to creating a better travel experience and reliable service,” WCNC Charlotte reported.

“The transit center is a key component of our overall mobility system,” said CATS CEO John Lewis, who added that “the current transportation center is outdated and no longer meets the needs of its customers.”

Through pop-ups, virtual meetings and surveys, CATS presented in October two options to hundreds of riders and bus drivers, according to the WCNC Charlotte report.

“A modified two-level terrace option at one level at light rail, so above street level… and then a street level portion of that,” said CATS Director of Planning Jason Lawrence, as reported by WCNC Charlotte. “Then we modified the concourse option to better improve traffic flow with buses going in and out of the facility.”

According to the WCNC Charlotte report, the agency, which said “safety and overall personal security are priorities,” found most participants “preferred transferring in Uptown over other locations throughout the city. A third did not feel safe crossing the bus travel lanes at the current center. Improved lighting and visible security presence were also ranked as important factors for the new facility.”

According to the WCNC Charlotte report, the agency’s goal is to have a temporary center built by 2024 or 2025 with a permanent location, priced at approximately $89 million, to be built and operating between 2028 and 2029.

CATS leaders, WCNC Charlotte reports, plan to have a final recommendation on Jan. 3 and an action review by the city council on Jan. 9.

RTD announced on Nov. 8 that it is seeking a corporate partner interested in naming rights opportunities for the agency’s commuter rail A Line, which runs between Union Station and Denver International Airport.

Corporate partnership opportunities, which may include brand visibility on signage, stations, vehicles, recorded announcements, digital properties and marketing collateral, “enable businesses to align their brands with a burgeoning marketplace throughout the Denver metro area and reach the consumer ridership base of one of the nation’s top transit systems,” RTD said.

“RTD is a key contributor to the economic vitality of the Denver metro region, not only by connecting people to where they need to go, but by elevating corporate exposure through our advertising and corporate partnership opportunities,” said General Manager and CEO Debra A. Johnson. “In the case of the A Line, this service is well-known to customers and travelers worldwide, with high visibility and an excellent service record. It provides great value for a branded corporate partnership.”

DART announced on Nov. 8 that it has partnered with Assurance Wireless to offer free cell phone service and a free cell phone to eligible riders who are currently enrolled in a qualifying federal or state assistance program. Participants, the agency adds, can also receive a Discount GoPass® Tap Card, with a 50% discount on the regular price of a DART pass, when attending one of several upcoming events.

To establish eligibility, DART riders should bring proof of participation in qualifying programs (supporting documentation) to the following events. Documentation must include full name and address and be dated to show current participation.

DART riders may qualify for the Affordable Connectivity Program (ACP), a government program that reduces the customer’s broadband internet access service bill, if they participate in the following: