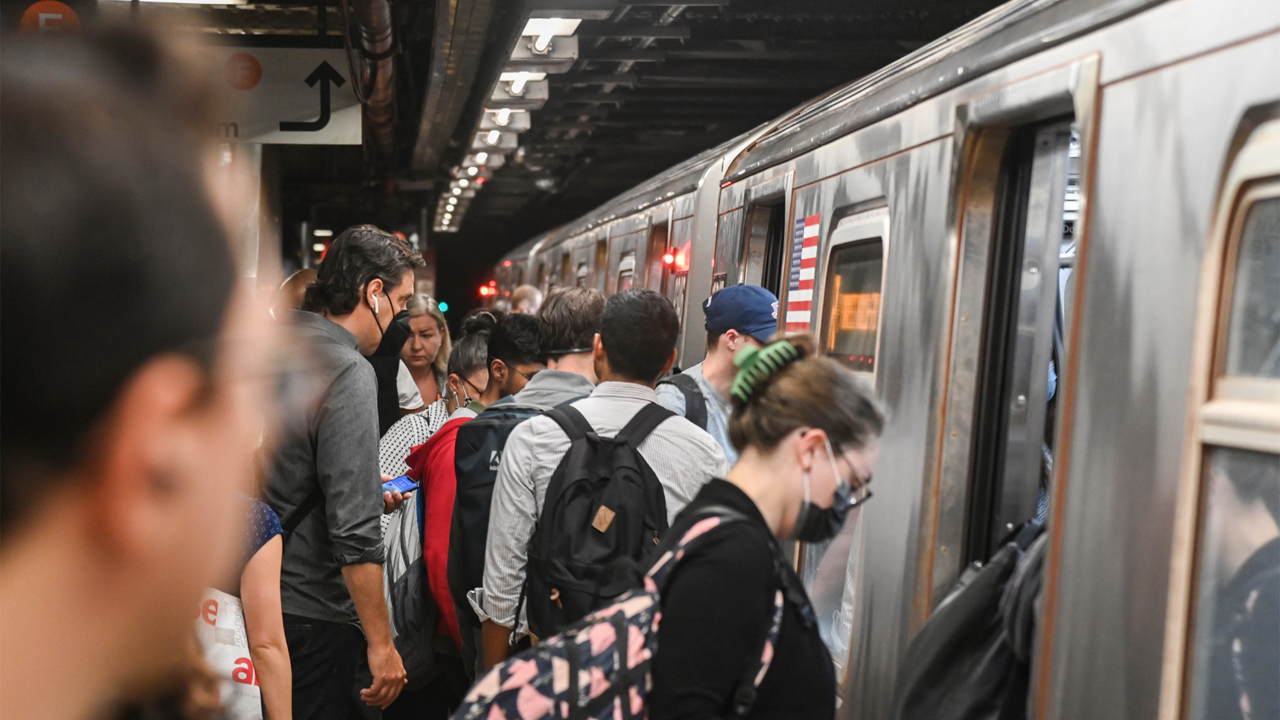 New York MTA on Nov. 30 said it “needs to boost fares above its expected 4% hike and may be forced to cut service and implement layoffs if state and city lawmakers fail to direct more aid to the system to help fix an estimated $3 billion deficit in 2025,” according to a Bloomberg report. (Photograph Courtesy of MTA)

The New York Metropolitan Transportation Authority (MTA) has released its proposed 2023 budget and four-year financial plan. Also, live-wire testing continues for Sound Transit’s East Link light rail line, which will extend 14 miles from downtown Seattle to Redmond, Wash.; and VIA Rail Canada has released a third-quarter 2022 report and entered into a long-term agreement with CGI for work on its new online reservation system.

MTA on Nov. 30 said it “needs to boost fares above its expected 4% hike and may be forced to cut service and implement layoffs if state and city lawmakers fail to direct more aid to the system to help fix an estimated $3 billion deficit in 2025,” according to a Bloomberg report.

During a financial presentation, the transit agency said it is “seeking $4.65 billion of combined new government funding between 2023 and 2026 to help cover lost farebox revenue.” Weekday subway ridership is at 60% of 2019 levels, and some $15 billion in federal COVID-relief funds “to cover lost farebox revenue is set to run out in 2025, unless the MTA can spread it out longer with additional state help,” according to Bloomberg.

“Without new recurring revenue, the board will have to look to larger fare hikes, service cuts and headcount reduction to close the remaining gaps,” MTA Chief Financial Officer Kevin Willens said during the agency’s monthly board meeting, Bloomberg reported.

Officials anticipate that farebox revenue will cover about 30% of MTA’s operating budget, rather than the 40% before the pandemic, according to Bloomberg.

According to Bloomberg, MTA plans to use the remaining COVID-relief funding “through 2026 rather than use it all to fix near-term budget gaps in 2023 and 2024,” which means government funds would be needed “as soon as next year.”

Bloomberg quoted MTA Board Member and New York State Budget Director Robert Mujica as saying: “People are willing to fund a functioning MTA that’s performing and meeting the needs of New Yorkers, not necessarily one that they don’t think is doing that or making great increases and improvements.”

The MTA Board is slated to meet on Dec. 21 to consider and approve the 2023 budget.

Overnight live-wire LRV testing has been rolling out on the East Link light rail tracks, according to Sound Transit. Crews conducted several tests in November, with trains moving at 20-30 mph between the 120th/Spring District and Redmond Technology stations (see map above).

Fourteen miles long, the East Link extension project includes 10 stations from Seattle’s International District to Judkins Park, across I-90 to Mercer Island and South Bellevue, and through downtown Bellevue and the Bel-Red area to Redmond Technology Station. The project also includes the new Operations and Maintenance Facility East in Bellevue. While East Link service was slated to begin in mid-2023, “construction challenges are currently projected to delay [project] completion by at least a year,” according to Sound Transit. Further updates are expected by the end of 2022.

On Nov. 30, the transit agency provided the following “behind-the-scenes” photographs of LRV testing:

VIA Rail on Nov. 30 issued a third-quarter 2022 report (see above). According to the agency, “operations returned to levels that are slightly below those operated before the pandemic, which is a significant increase compared to the corresponding quarter of 2021. As a result, capacity has increased by 52.0% in terms of train-miles, and by 77.6% in terms of seat-miles.”

During third-quarter 2022, VIA Rail said it reached more key milestones in the progress of its fleet replacement program for the Quebec City-Windsor Corridor, including the arrival of the second of 32 new Siemens trainsets at the Montreal Maintenance Center; and the inauguration of the new fleet’s simulator at the Transportation Training Center in Toronto. Additionally, collective agreements between VIA Rail and Unifor were ratified in August. That same month, the agency launched a Supplier Conduct and Responsible Sourcing Policy, which it said reinforced “the basic standards of conduct that VIA Rail expects from its suppliers and allow[s] for the integration of sustainability criteria into certain contracts for products and services it purchases.”

For safety, VIA Rail reported adding “buffer cars to the front and back of all trains running with stainless steel (HEP) equipment.” The addition of these cars, it noted, “has contributed to limitations of equipment availability, which has required VIA Rail to continue operating at a reduced capacity.”

Also on Nov. 30, VIA Rail reported that CGI will provide managed services for the agency’s new reservation system to be launched in 2023. CGI was selected in 2020 to help build the cloud-based reservation system, and now, under a new agreement, will manage “critical business applications.”

“This new reservation system is an integral part of the customer journey and another important milestone in VIA Rail’s modernization,” VIA Rail President and CEO Martin R. Landry said.

“Supporting VIA Rail in delivering an enhanced passenger experience is an important responsibility for us,” said Guy Vigeant, President of CGI’s operations in Canada.