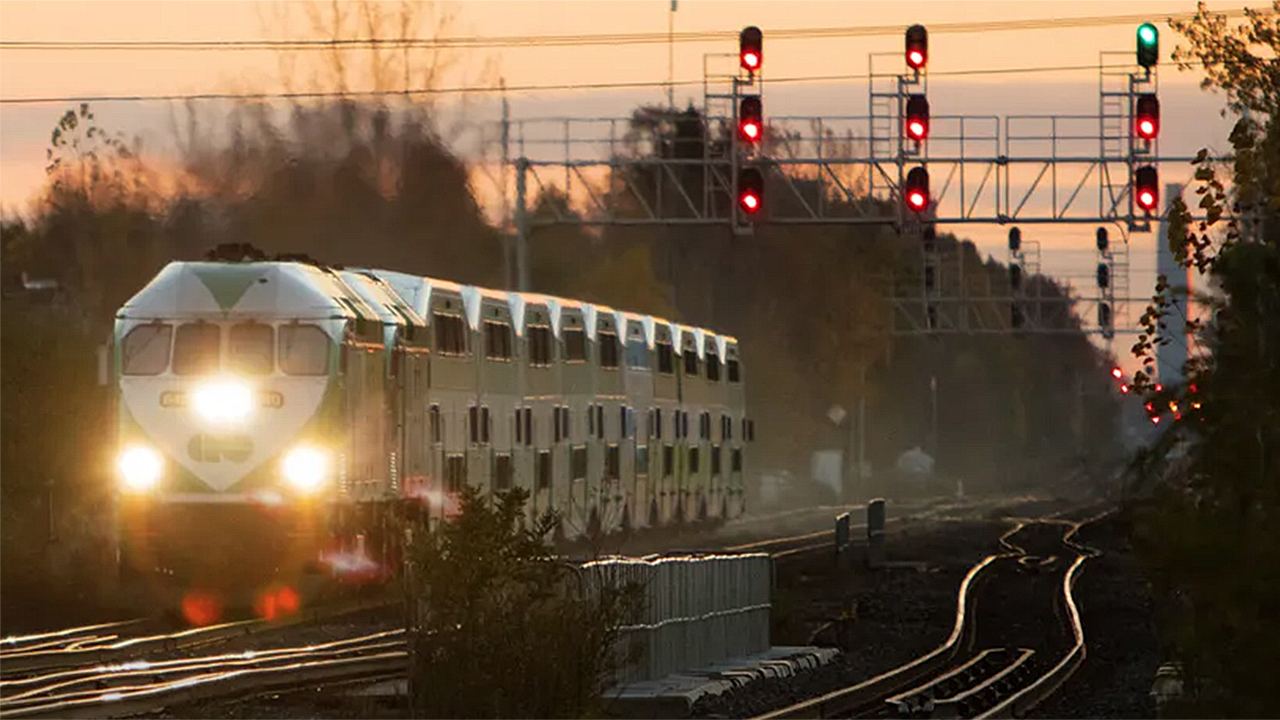 Metrolinx, the city of Toronto, and the province of Ontario have launched the procurement process for the first of five new SmartTrack GO stations across the city. (Metrolinx photo)

Metrolinx, the city of Toronto and the province of Ontario have released a Request for Proposals (RFP) for construction of the East Harbour Transit Hub, the first of five new SmartTrack GO regional/commuter rail stations across the city. The SmartTrack Stations program will build new rail stations along roughly 25 miles (40 kilometers) of Metrolinx’s existing GO rail corridors to “provide a greater choice of reliable and convenient route options to shorten commutes and increase quality of life for people traveling in the city,” according to Metrolinx.

Submissions are slated to close in June 2022, with a shortlist of teams being determined and invited to participate in the second step of the RFP process beginning in July 2022. Construction is expected to begin this fall, with the station opening between late 2027 and early 2028.

The East Harbour Transit Hub (see plan below) will serve the Lakeshore East and Stouffville GO Lines. To be located between Union Station and Danforth GO Station, the new station is expected to bring about 100,000 daily riders, according to Metrolinx.

The project will include:

• A concourse area with customer amenities and accessible drop off.
• Connections to the future Broadview Avenue extension.
• GO platforms for local and express train service, including elevators.
• Track re-alignment for three GO tracks, and associated track and signal works, and grading for a future fourth GO track.
• Access to GO trains, the future Ontario Line subway, and future TTC light rail transit—in one location.
• Eastern Avenue Bridge reconstruction to support both GO transit and the new Ontario Line subway.
• A multi-use path and trail bridge and landings over the Don River.
• A single train connection to Pickering, Whitby and Oshawa, as well as destinations such as Mississauga, Oakville and Hamilton.

The East Harbour development is being delivered through Ontario’s Transit-Oriented Communities program.

“The launch of the procurement process for East Harbour Transit Hub marks an exciting and important step forward in delivering a multi-modal transit station that will provide seamless connectivity to the new Ontario Line subway, GO Transit and TTC services—and offer new ways for customers to connect to locations in the city,” Metrolinx President and CEO Phil Verster said.

Brittany Cain is the second female engineer for Trinity Metro’s TEXRail commuter line between Fort Worth and DFW Airport in Texas. She began her transit career as a TEXRail conductor in April 2019, following 12 years of U.S. military service.

When she started the job, she hadn’t thought beyond her role as a conductor, but “[i]t hit my radar the more I worked on the train,” she said. “I had been a conductor for more than two years and I wanted to challenge myself in a new role.”

She was promoted earlier this month after completing 40 hours of classroom training and 180 hours at the controls of the agency’s Stadler FLIRT diesel-electric multiple units.

“Diversity is essential to our culture, and we’re celebrating this trend of promoting female engineers at TEXRail,” said Jon-Erik “AJ” Arjanen, Vice President and Chief Operating Officer for Rail at Trinity Metro, who was referring to the first female engineer promotion in November 2021. “The rail industry, from an operations perspective, is largely male-dominated, so we’re extremely excited and proud of Brittany’s promotion.”

• Doubling regional bus service levels.
• Up to 106 miles (170 kilometers) of new rapid transit on up to 11 corridors, including up to nine Bus Rapid Transit (BRT) routes using new zero-emission buses on dedicated, traffic-separated lanes; a rapid transit connection to the North Shore; the Burnaby Mountain Gondola to SFU; and the Millennium Line SkyTrain extension from Arbutus Street to the University of British Columbia, “pending the development of a new funding model with project partners.”
• Exploring other potential SkyTrain extensions, including Newton in Surrey and Port Coquitlam.
• Building 280 miles (450 kilometers) of new traffic-separated cycling paths.

“It’s critical that we lay the groundwork for achieving the region’s shared goals set out in ‘Transport 2050,’” TransLink CEO Kevin Quinn said. “Our region needs to rapidly invest in transportation improvements to combat climate change, address the housing affordability crisis, and improve congestion in a growing region. ‘Transport 2050: 10-Year Priorities’ will chart a fast and effective course to quality transportation choices for the people of metro Vancouver.”

Highlights of the plan include: “maintaining 2022 bus service levels through 2024; fulfilling the regional funding share to complete the Surrey Langley SkyTrain project in 2028, including a new operations and maintenance center; bus fleet electrification, which includes putting over 462 battery-electric buses in service by 2030; bus speed and reliability improvements, which will invest $21.6 million and result in net savings of almost $32 million in operating costs; implementation of the R6 Scott Road RapidBus and bus priority infrastructure for the R7 Richmond to Expo Line RapidBus line; increasing HandyDART service by 3% over pre-COVID levels in 2023; making streets safer through investments in walking, biking, rolling and roads; providing washrooms at six locations across the transit network to improve accessibility and the customer experience of taking transit; and upgrading the Compass system technology to enable new features and products to improve the customer experience.”

TransLink is accepting comments on both the 2022 Investment Plan and Transport 2050: 10-Year Priorities until May 4.

VIA Rail’s 2021-2025 sustainability plan was informed by a review of the railroad’s policies, practices and sustainability. Among its objectives: by 2030, to reduce greenhouse gas emissions by 30% or more (compared with 2005); and by 2025, to offer zero-waste trains in the Québec City-Windsor corridor, train all employees on sustainability, align 80% of community investments with sustainability plan priorities, and reach 80% integration of the responsible sourcing policy by suppliers.

“Sustainability is fundamentally related to our value of acting today for a better tomorrow,” VIA Rail President and CEO Cynthia Garneau said. The new plan, she noted, focuses “on climate action, responsible sourcing and waste management, and it will be yet another way for VIA Rail to be part of the solution in helping Canada create a more sustainable future for all.”

At no cost to the transit agency, the Anacostia, Southern Ave., Cheverly and Naylor Rd. stations will be equipped with solar carports, which are described as “overhead canopies built of steel that support solar panels, which collect sunlight, a renewable energy source, that is converted to electricity. The electricity will be sent to the utility company and finally delivered to local homes and businesses.”

A subsidiary of GSRP will own the photovoltaic solar panels, generating power for homes and businesses in the region; in return, the 25-year deal will provide a long-term revenue stream for WMATA, the transit agency reported.

SunPower Corporation recently installed Anacostia’s first solar canopy, consisting of 240 solar panels, atop its parking garage. Four more canopies are slated for completion this summer. “When finished, the Anacostia site alone is expected to generate electricity equivalent to the power used by 165 homes annually,” reported WMATA, which noted the site would have a total 3,000-plus solar panels.

Initial construction is under way to install solar carports at Southern Ave. Station, while work will begin at the Naylor Rd. and Cheverly stations later this year. Each of the four stations will consist of multiple solar canopies.

WMATA riders will also benefit from the project, “with improved parking amenities, including protection from extreme weather; brighter, more efficient LED lighting; [and] new security cameras and emergency call boxes,” according to the agency.

WMATA “is committed to being a regional partner in making our communities more sustainable, through transportation, green building and innovation,” WMATA General Manager/CEO Paul J. Wiedefeld said. “Through this partnership, [WMATA] is making it possible to provide local businesses and homeowners with clean energy.”