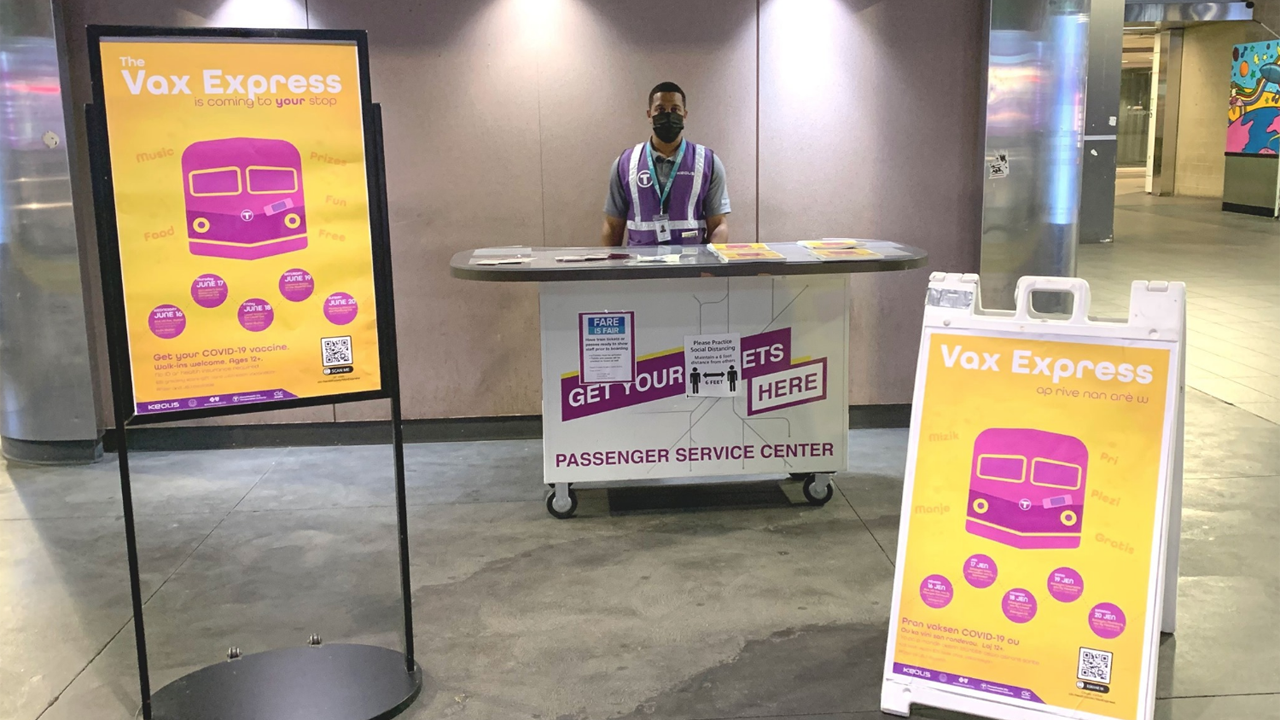 Through the new Vax Express program, CIC Health established a rolling vaccination site on board an MBTA Commuter Rail train, making stops at seven stations earlier this month. The public could walk-up without an appointment or book an appointment in advance. A second round of vaccinations on the Vax Express will take place July 7-11.

Through the Vax Express program, CIC Health partner Cataldo Ambulance established a rolling vaccination site on board an MBTA Commuter Rail train. The train made stops earlier this month at centrally located stations in “disproportionately impacted communities with low vaccination rates.” They included Worcester, Lowell, Lawrence and Fitchburg, and in Boston at Mattapan, North Station and South Station. The public could walk-up without an appointment or book an appointment in advance. A second round of vaccinations on the Vax Express will take place July 7-11 at the same locations.

Keolis, MBTA’s commuter rail operator, is providing train crews and other resources, and has worked with CIC Health and the Massachusetts COVID-19 Command Center to develop the train schedule.

“The MBTA is pleased to be a part of the Baker-Polito Administration’s comprehensive efforts to increase access to the Commonwealth’s vaccination program,” MBTA General Manager Steve Poftak said. “As vaccination rates increase, the MBTA looks forward to serving current and returning riders while maintaining a transit environment that is safe and comfortable for everyone.”

“As historic and central features in our cities and towns, train stations are an attractive vaccination location because they are convenient and allow for a fun community-focused event,” said John Killeen, acting CEO of Keolis Commuter Services. “Our Keolis Boston team is proud to support the Commonwealth’s efforts to enhance vaccine access, especially in a way that advances equity, and contributes to improving the health and safety of our families, friends and neighbors.”

SFMTA staff will conduct mechanical inspections of the historic cable cars as well as operator retraining in mid-July. By the first week of August, they will run a “mock service” trial with riders. By early September, cable car service will return: first to the Powell-Hyde line from about 7:30 a.m. until about 10 p.m. (though cars returning to the cable car barn after 10 p.m. will continue to take riders to Chinatown). Service on the Powell-Mason and California routes will then follow. SFMTA temporarily halted cable car service in March 2020, due to the pandemic.

The first $25 million of Amazon’s $100 million investment is slated for pre-development activities, such as site due diligence, engineering and permitting, while the remaining $75 million will support housing construction, which is expected to begin within five years.

The funding is part of Amazon’s $300 million total transit commitment for “equitable transit-oriented affordable housing development in communities it calls home.” Additionally, the investment with Sound Transit is the second in the region from Amazon’s Housing Equity Fund, a more than $2 billion commitment to preserve and create 20,000-plus affordable homes through below-market loans and grants. The first: $185.5 million in below-market loans and grants to King County Housing Authority to preserve affordability for 1,000 apartment homes.

The Sound Transit TOD program has built, is constructing, or is designing more than 1,500 affordable apartments on Sound Transit surplus property, according to the agency.

DCTA has five A-Train stations; two in Denton and three in Lewisville (see map below). The A-Train also connects with DART light rail at the Trinity Mills Station in Carrollton, where riders can transfer to the Green Line, which provides access to DART’s Red, Orange and Blue Lines as well as Trinity Railway Express (TRE) commuter service.