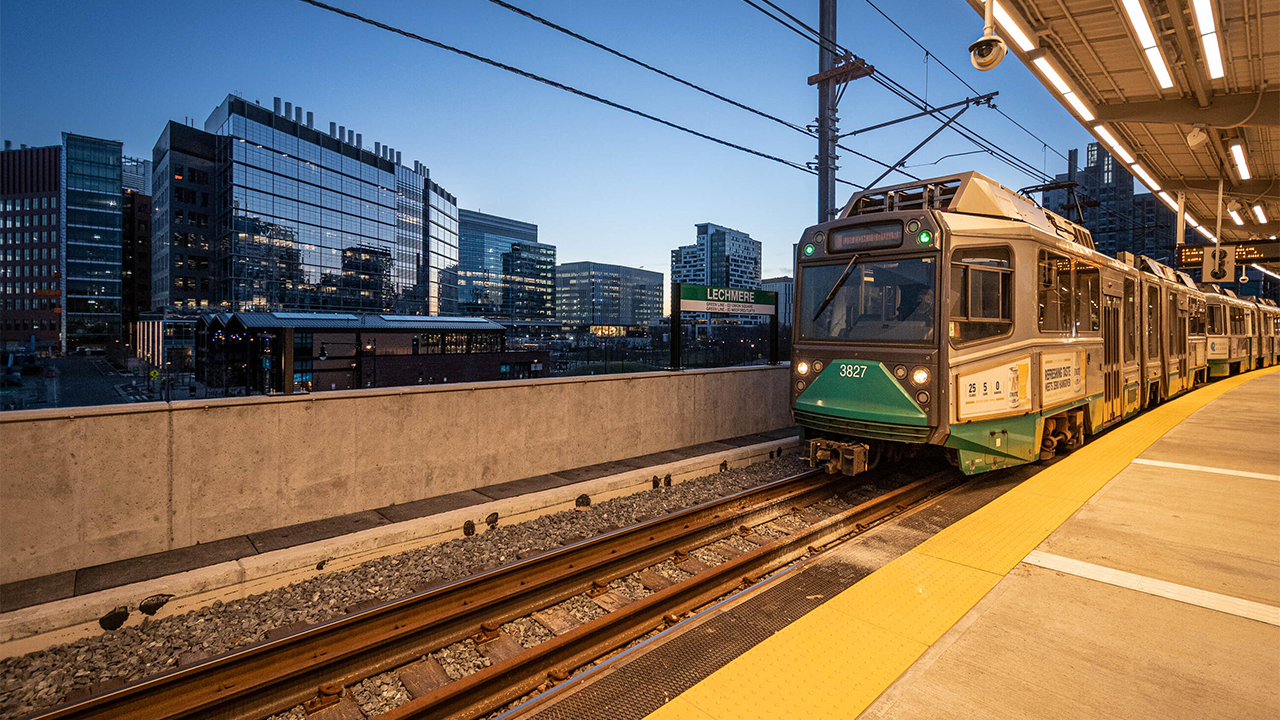 The opening of the MBTA's GLX Medford Branch has been shifted from late summer 2022 to late Nov. 2022.

The MBTA announced on Aug. 5 that the opening of the GLX Medford Branch has been shifted from late summer 2022 to late Nov. 2022 due to several contributing factors, including necessary additional work and re-testing of the Medford Branch’s power systems.

In order help facilitate the opening of the Medford Branch, however, and to allow crews to perform final-phase construction work, temporary shuttle buses will replace all Green Line service between Government Center and Union Square stations in both directions beginning Monday, Aug. 22, through Sunday, Sept. 18. This diversion in service is also necessary, the MBTA says, to allow for continued work at the private Government Center Garage project. Regular Green Line rail service will resume at these stops on Monday, Sept. 19.

Much of the work to be performed during the service diversion is tied to the opening of the Medford Branch, including the advancement of final-phase construction elements on the GLX project and the East Cambridge Viaduct.

The start date, MBTA says, has also been affected by the availability of Safety and Operational support crews that were previously prioritized for GLX, but are now re-allocated to other critical MBTA construction work, including MBTA’s response to Federal Transit Administration (FTA) Safety Management Inspection directives. “The MBTA is in full support of making these safety-related changes and appreciates the support of riders and the public as the Medford Branch is brought into passenger service,” the Authority said.

According to the MBTA, the temporary diversion of Green Line riders onto shuttle buses will provide contractors with around-the-clock access to the tracks and overhead wire system, enabling them to safely and quickly complete work deemed critical to the opening of the new Medford Branch.

Caltrain announced on Aug. 5 that the VTA voted unanimously to accept Caltrain’s Governance Memorandum of Understanding (MOU), the last of Caltrain’s member agencies to accept the proposal. The MOU, Caltrain says, establishes a permanent, separate Executive Director position for the agency, as well as five Caltrain-specific direct reports, while the San Mateo County Transit District (District) will be repaid for its initial investment in Caltrain.

Under this new agreement, the new Executive Director will report directly to the Caltrain Board of Directors, rather than the District’s General Manager/CEO. Five new positions have been created that will report directly to the Executive Director. The District will be repaid ($19.8M) for its initial investment in Caltrain, along with additional resources ($15.2M) for the delay in payment of the $19.8M and the District’s agreement to assign some of its rights as managing agency to Caltrain. The District will relinquish certain real property interests related to Caltrain and will continue to provide it with shared services.

“With all of our partners in agreement, we are again a united Caltrain,” said Caltrain Board Chair Steve Heminger. “We will now turn our full attention to delivering quality rail service to the people of the Bay Area, and electrifying the corridor to provide the modern, green Caltrain that the Bay Area deserves.”

Metrolinx recently reached another milestone for the Eglinton Crosstown West Extension with the second tunnel boring machine (TBM), known as Rexy, starting the journey from Renforth Drive to Scarlett Road.

Tunneling on the project started this past spring, with Renny, one of the two TBMs digging the roughly 3.7-mile (6-kilometer) tunnels, leading the charge.

And Renny has been busy, Metrolinx says. Since April, the massive machine has tunneled more than 650 meters, “making tremendous progress in a short amount of time—not bad for a 750-tonne machine traveling 10 to 15 meters a day.”

According to Metrolinx, there are a few reasons why Rexy and Renny didn’t start tunneling at the same time. One is that the space inside the launch shaft (where the machines are lowered in the ground) can only accommodate one TBM launch at a time. At 6.58 meters high and 131 meters long, these are huge machines. Each one is taller than a giraffe and, stood on their ends, a quarter of the height of the CN Tower.

The other reason is that the tunneling team can learn a lot from the first TBM that they can apply when the second machine starts tunnelling.

Rexy and Renny will continue this pattern over the next 20 months, Metrolinx says. Renny will reach the extraction shaft (the spot where the TBMs are pulled out of the ground) just west of Scarlett Road first, with Rexy following behind.

These tunnels will form a large part of the Eglinton Crosstown West Extension, which will expand the Eglinton Crosstown light rail transit (LRT) line another 9.2 kilometers west, to Renforth Drive. Plans are also being explored to extend the line even further to Pearson International Airport, according to Metrolinx.

After the TBMs are pulled out of the ground near Scarlett Road, the route will transition to an elevated section, passing over the Humber River, before heading back underground just east of Jane Street, where the extension will connect to the Eglinton Crosstown LRT at Mount Dennis Station.

Read the story about the origin of the TBMs’ winning names here.

In response to the economic stress that Sacramento, Calif., is currently experiencing, SacRT has launched a series of social services programs aimed at reducing homelessness, assisting working families, improving access to education and dealing with climate change.

SacRT will publish a series of articles and videos in the coming months that will offer an inside look at these expanded efforts. Its hope, SacRT says, is to “encourage more awareness and support for the creative approaches to solving Sacramento’s problems.”

To read the first blog and watch the first video in this series, click here.

“Improving service along existing east-west corridors is the most cost-effective way to get started, to demonstrate passenger rail’s potential for creating economic growth, attracting new business, tourism and new talent to Ohio,” said Grace Gallucci, NOACA’s Executive Director & CEO. “The freedom to travel more frequently during the day–providing inner-city and inter-state connections–more safely and efficiently will enhance quality of life for our residents while also advancing regional and state efforts.”

According to 19 News, currently Cleveland’s Amtrak station only operates between midnight and 8 a.m., and, if approved, the expansion would include daytime trips.

The Hyde Park Station is located between the intersections of Crenshaw Boulevard and Slauson Avenue and 59th Street in the Hyde Park community. According to Metro, the station serves one of the most densely populated areas along the Crenshaw Corridor and Los Angeles, giving residents and others a new transportation option to the automobile.

“Hyde Park is one of the oldest neighborhoods in the entire City of Los Angeles, so it’s fitting that Metro will soon be offering a new transit alternative to this important community,” said Glendale City Council Member and Metro Board Chair Ara J. Najarian. “I am excited to see the opportunities this new station and line will bring to Hyde Park by connecting people to local parks, schools, housing and other key destinations.”

The Hyde Park Station is surrounded by several historic neighborhoods, including Leimert Park, Vermont Square, Manchester Square and Inglewood. The station is only a short walk from Crenshaw High School and several local mom-and-pop businesses.

Several housing developments by private developers are now underway in the area that will also benefit from the new station.

Metro says it is also supporting improved safety for pedestrians to access the new station. With funding through Metro’s transit-oriented development planning grant, the City of Los Angeles has completed a Crenshaw Boulevard Streetscape Plan that will enhance safety by improving the walking environment through the installation of wider sidewalks and crosswalks and curb extensions and median refuge islands, making it easier for Metro riders to access the Hyde Park station, whether they are walking, riding a bike, scooter or skateboard as part of their trip.

“Metro and the City of Los Angeles are pulling out the stops to make our new Hyde Park K Line Station as safe and accessible as possible for our community,” said Metro Board First Vice Chair Jacquelyn Dupont-Walker. “Taken together, these improvements will vastly improve access to opportunity that Hyde Park has needed for decades.”

According to Metro, the $2 billion K Line will open with seven stations later this year. The Aviation/Century Station is projected to open in Fall 2023. The Airport Metro Connector Project, which will provide a connection to Los Angeles International Airport, is scheduled to open in late 2024. The line itself will connect the existing Metro E Line (Expo) at Crenshaw and Exposition Boulevards to the C Line (Green) in El Segundo, providing a key transit alternative to driving the increasingly congested I-10, I-405 and I-105 freeways.

“Hyde Park is one of the oldest neighborhoods in Los Angeles. I am proud to represent this community and to know that its deep history and culture will be more accessible to residents across the county and even the world with the opening of the Crenshaw Line,” said Los Angeles County Supervisor Holly J. Mitchell, representing the Second District.

“Once opened, the Hyde Park station will be an important node for our transit service in south L.A.,” said Stephanie N. Wiggins, CEO of Metro. “As we dedicate this station today, I want to thank all the community members who helped Metro design, build, and deliver a piece of community infrastructure that will be well-used and well-loved for generations.”

All K Line stations include artwork commissioned through the agency’s Metro Art program. Artists were selected through an open, competitive selection process following the recommendation of a panel of community-based arts professionals. The Hyde Park Station includes a series of porcelain enamel artworks by Carlson Hatton, entitled Hyde Park Oasis.