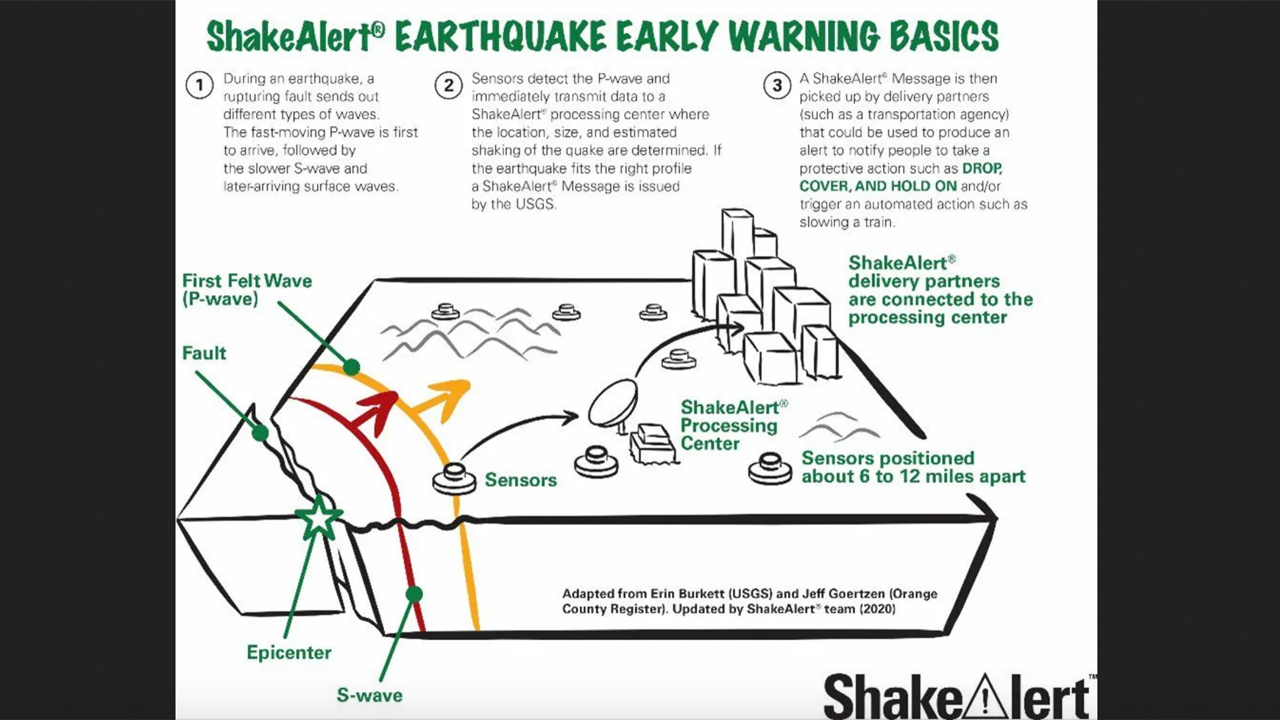 LACMTA has teamed with Early Warning Labs of Santa Monica, Calif., to install ShakeAlert, an earthquake early warning system. Operated by the U.S. Geological Survey (USGS), it detects earthquakes of magnitude 4.8 or greater. “The system alerts agencies to help protect people, critical systems, equipment and infrastructure within seconds of the initial energy radiating from the epicenter,” according to the transit agency. By deploying ShakeAlert at 26 facilities, “employees could get an early alert before the shaking arrives, potentially helping them keep fellow employees and transit facilities safe.”

LACMTA began beta testing the technology in 2007. In 2016, its Emergency Management Department began a pilot project to install the system at its Rail Operations Center; that pilot went live in 2018. ShakeAlert has now been expanded to 25 additional facilities, and LACMTA is working to install it in every bus and train on its system to protect riders.

Metrolink announced in September it would pilot the earthquake early warning technology along the 91/Perris Valley commuter rail line between Perris and Riverside, Calif.

According to a Bloomberg report, the New York MTA Board voted on Oct. 20 to approve a new subsidiary to oversee the 350,000-square-foot East Side Access terminal, slated to open in December 2022.

The $11 billion East Side Access project will bring MTA Long Island Rail Road service to the east side of Manhattan. The commuter railroad currently runs between Long Island and Penn Station, which is on Manhattan’s west side.

Project construction began in 2006 and includes a new passenger terminal under Grand Central, which currently serves MTA Metro-North Railroad and MTA New York City Transit. It will include eight new tracks plus 25,000 square feet of retail space. Bloomberg reported that a “private operator will manage and maintain the hub. Long Island Railroad employees will take care of the rail work, creating about 210 new positions.” The new connection is expected to double LIRR’s capacity into Manhattan, with up to 24 trains per hour.

Bloomberg quoted MTA Acting Chair and CEO Janno Lieber as saying that the new MTA subsidiary would enable the agency “to have a couple of people who are already at the MTA working for this new subsidiary and their sole job will be to oversee the private sector unionized operation that will be operating some of the retail and public spaces.”

The South Florida Regional Transportation Authority (SFRTA) has announced that Tri-Rail commuter rail service will return to its full 50-weekday and 30-weekend train schedule on Oct. 25.

When ridership fell in March 2020 due to the pandemic, the schedule was reduced to 18 weekday and 12 weekend trains for several months, and was then increased incrementally, ending just short of its full schedule in October 2020. Ridership is now at 60% of its pre-pandemic levels.

In 2018, STM awarded Thales a contract to provide new computer-based interlocking systems across all metro lines in Montreal, and to replace existing signaling equipment at eight stations and garages.

This year, Green line stations Frontenac and Angrignon as well as Orange line station Côte-Vertu entered revenue service with Thales LockTrac™ technology. Interlocking equipment replacement at the Angrignon and Côte-Vertu garages will be completed this year; and at the final three stations in 2022.

Wabtec is supplying Alstom with components for 200 new multilevels that will be delivered to Chicago’s Metra. (Metra finalized the $775.4 million car order with Alstom in March.)

“We are thrilled to begin work on this large-scale contract supplying the most advanced technology for doors, brakes and HVAC to one of the world’s busiest commuter rail systems,” Wabtec Transit President Lilian Leroux said. “This new contract builds upon our position as a leading equipment manufacturer on both sides of the Atlantic and across the world, and will ensure safe, reliable and timely passenger service to millions of riders over 1,200 miles of track and across more than 240 stations throughout the greater Chicago land area.”