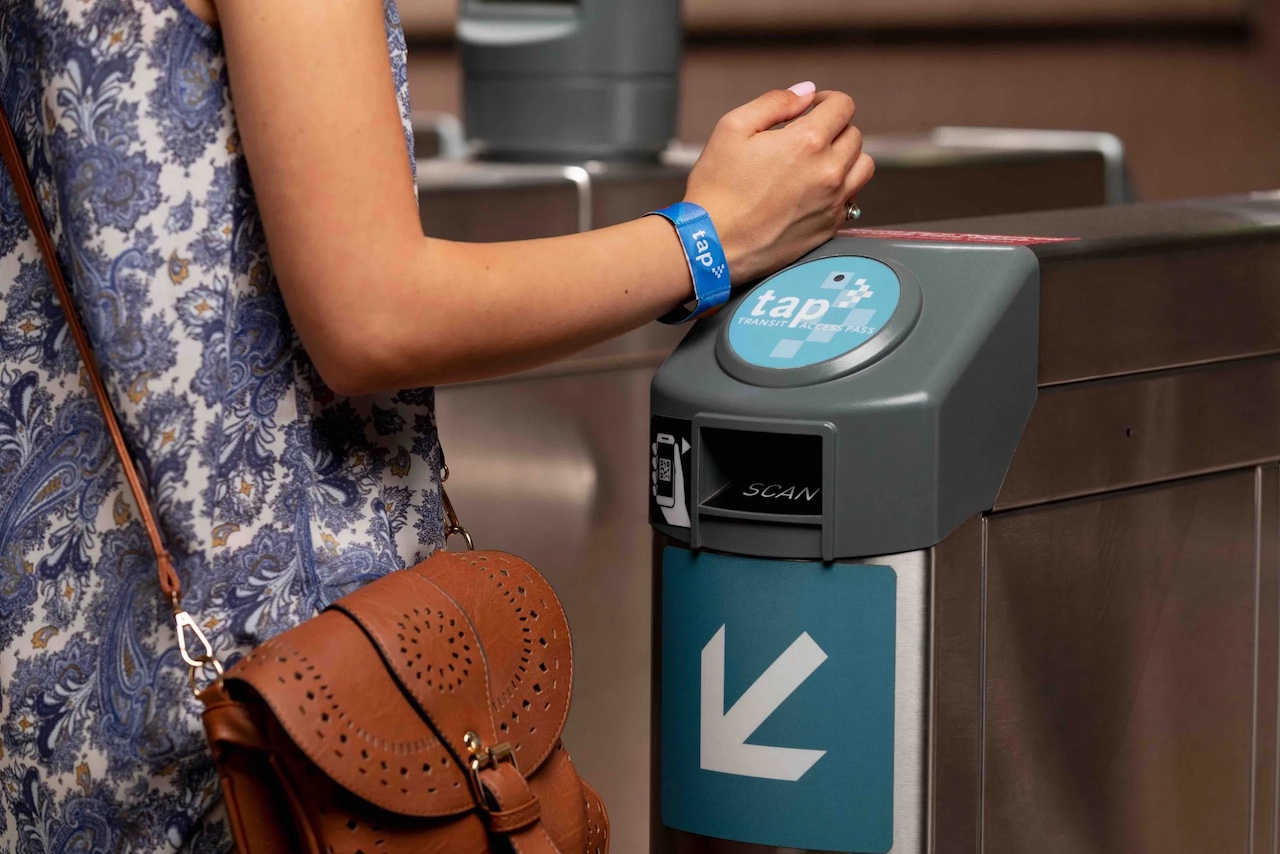 TAP wearables are back for a limited time and are available at Metro Customer Centers.

LA Metro announced Dec. 1 that TAP wearables are back for a limited time and are available at Metro Customer Centers.

The TAP wearables, which are available in three options—Mini Key Fob, TAP Stretch and TAP Flex—avoid customers from having to take out their wallet or pull out a phone to tap. “With a TAP wearable, simply hold your key fob or wristband over the TAP dial for a quick and convenient way to pay your fare when you’re on the go,” the agency said.

TAP wearables work just like a regular TAP card and can be reloaded using the same methods to pay fare on Metro and 25 additional transit agencies. TAP wearables, which can be purchased at Metro Customer Centers, cost $5 and expire after five days. Loading fare at the time of purchase is optional.

BART’s Board of Directors on Dec. 1 gave the General Manager authority to enter into a two-year Exclusive Negotiating Agreement (ENA) with BRIDGE Housing Corporation to begin planning TOD just steps from the agency’s North Berkeley Station.

According to the agency, the TOD would be built on about 5.5 acres of BART-owned land surrounding the station, including the main passenger parking area. A vision document adopted by both BART and the City of Berkeley anticipates 500 to 1,200 homes on BART’s property at North Berkeley, at least 35% of which would be affordable.

“Every time I’m at North Berkeley Station, I look around and imagine housing replacing the sea of nearly empty parking lots, and it brings me so much joy,” said BART Board President Rebecca Saltzman. “With today’s action by the BART Board, the dream of more housing—especially affordable housing near BART—is closer than ever to becoming reality.”

According to BART, the City of Berkeley has “expressed strong support for the project,” and, in April 2021, its City Council pledged $53 million as the subsidy needed to achieve at least 35% affordable housing at North Berkeley TOD, as well as at a future project planned at Ashby Station.

This team was selected last July following a Request for Qualifications (RFQ) issued by BART for its “wealth of experience, leadership by a nonprofit organization, and members’ strong track record with engaging communities during the planning of new homes,” the agency said.

According to BART, BRIDGE’s team is expected to share its preliminary plan for the development to receive community input. Construction would be completed in several phases, with the first phase starting in 2025 or later. Some of the existing BART parking could be replaced within the new buildings.

If BART is unable to advance this development with BRIDGE’s team, the Board authorized staff to enter into an ENA with the second-ranked team, led by Republic Metropolitan.

The Fairfax County Planning Commission on Nov. 16 approved a plan amendment for a new transit station area for WMATA’S Huntington Transit Station Area (TSA) following a public hearing in October and a site visit by the commissioners on Nov. 10, according to a FFX Now (Fairfax County local news) report.

According to the report, the plan, which was put together by county staff with input from commissioners, the Mount Vernon Site-Specific Plan Amendment (SSPA) Task Force, WMATA and the public, calls for a mixed-use development on the site of WMATA’s Huntington Metro station, including 382,000 square feet of office, retail and community-use space, a civil plaza, more urban park space, a network of bike and pedestrian paths, a possible hotel, and 15,000 residential units with a minimum of 15% of those being affordable.

According to the FFX Now report, several “substantive concerns” about the proposed building heights, environmental issues and placemaking, as well as a few clarification questions were raised during the public hearing.

“After nearby residents worried about a loss of privacy for their smaller homes, the plan is lowering the maximum building height from 200 feet to 85 feet in the area between the middle parking garage and the homes on Biscayne Drive to ‘provide a more appropriate transition,’” according to the motion, and as reported by FFX Now.

Another tweak, according to the FFX Now report, “addressed concerns that a southern path connecting to the Metro might negatively affect wooded areas. While the plan now notes that ‘the design of this connection would minimize disturbance,’ the actual design will be more specifically determined when the development goes through the rezoning process.”

According to the FFX Now report, stormwater measures were also revised to be “substantially more extensive” than the minimum requirements, per the motion. Other modifications “address flexibility around who might be responsible for maintenance at the proposed civic plaza, the importance of public places, and the potential for increased light pollution. They also clarify that 15% of the residential units built should be affordable, in line with countywide rates.”

According to the FFX Now report, the plan “continues to preserve a tract of trees near the intersection of Huntington Avenue and Biscayne Drive. WMATA proposed selling the land to a developer to build more townhomes, but homeowners wanted to keep the trees as a buffer from the developed station and help with stormwater runoff.”

The Huntington TSA plan amendment will go to the Fairfax County Board of Supervisors for a vote currently scheduled for Dec. 6.

According to a Masslive.com report, the Western Massachusetts Passenger Rail Commission, which was created this past summer to “come up with a permanent body to manage and enhance passenger rail through the region” will host its first meeting in Pittsfield at 11 a.m. at the Berkshire Innovation Center in Pittsfield, Mass., on Dec. 9. The meeting will also be available via a livestream on the Massachusetts Department of Transportation (MassDOT) website.

According to the Masslive.com report, the 19-member Commission’s job will be to “review proposals and cost-benefit analysis from the previous East-West rail study that came out two years ago.” While Amtrak will run the trains, staff them and sell the tickets, the report adds, the state “will come up with an entity to secure funding and govern the project,” either the Western Massachusetts Rail Authority, the Massachusetts Bay Transportation Authority (MBTA), or something else.

In addition to the East-West Rail, the Commission will “study existing north-south service through Springfield, including CTrail’s Hartford Line; the Valley Flyer running from Springfield to Holyoke, Northampton and Greenfield; and the Berkshire Flyer linking New York City and Pittsfield,” according to the report.

In October, the state announced that Valley Flyer service would be permanent, having passed its two-year trial.

The agenda for Dec. 9 calls for public comment. The Commission will host six hearings in total with the other five not yet scheduled, said Eva deCharleroy, a staff member for the Senate Chair of the Commission Brendan P. Crighton (D-Lynn).

According to the Masslive.com report, the Commission is looking at dates in December and January and locations in Springfield and in Hampden and Hampshire counties.

According to a Santa Cruz Sentinel report, the Santa Cruz RTC Commission, by way of an 11-1 vote on Dec. 1, approved a staff recommendation to pursue a contract with HDR Engineering Inc. to “aid in developing a project concept report for the much-discussed” 22-mile electric passenger rail system connecting North and South County. Commissioner Randy Johnson was the sole vote against the move.

According to the staff summary, and as reported by the Santa Cruz Sentinel, the primary purpose of the report, which is expected to be completed within 24 months, is to “solicit extensive community input and develop early engineering studies in hopes of establishing a stable project definition for subsequent tasks.”

According to the Santa Cruz Sentinel report, the Commission approved funding only for the first year of the report by “allocating $3.8 million of its 2016 Measure D’s rail corridor category specifically–getting 8% of funds generated from the 30-year sales tax–and would not take funding away from other areas.”

The total cost of the concept report, according to the Santa Cruz Sentinel, will be approximately $7.7 million and the agency “does not have enough local funding to meet that figure,” and instead “plans to purse competitive grants to fill the gap for the remaining year and beyond.”

According to the Santa Cruz Sentinel report, some commissioners voiced more long-term skepticism than others but nearly all embraced Executive Director Guy Preston’s conclusion that this step was “necessary to see what’s next.”

According to a Gothamist report, the FRA has decided to allow the MTA to open its Grand Central Madison project (formerly East Side Access) by the end of the year “despite delays with the installation of mandated safety technology.”

MTA officials have said the project, which aims to bring Long Island Rail Road (LIRR) trains into a new station beneath Grand Central Terminal, would be completed by the end of 2022. However, LIRR petitioned on Oct. 14 for a waiver of compliance from a provision of safety regulations contained under Section CFR 236.100 (c), Hazard Detectors because one part of its Positive Train Control (PTC) system, the Advanced Civil Speed Enforcement System II (ACSES II) Tunnel Collision Avoidance (TCA) package, is “currently not integrated with, and does not enforce, LIRR’s hazard detector as Section 236.1005(c) otherwise requires.”

According to the Gothamist report, the FRA responded on Nov. 28, issuing a notice that the MTA could open train service, but must have the technology installed by Feb 25. The FRA said it will not be extending the deadline.