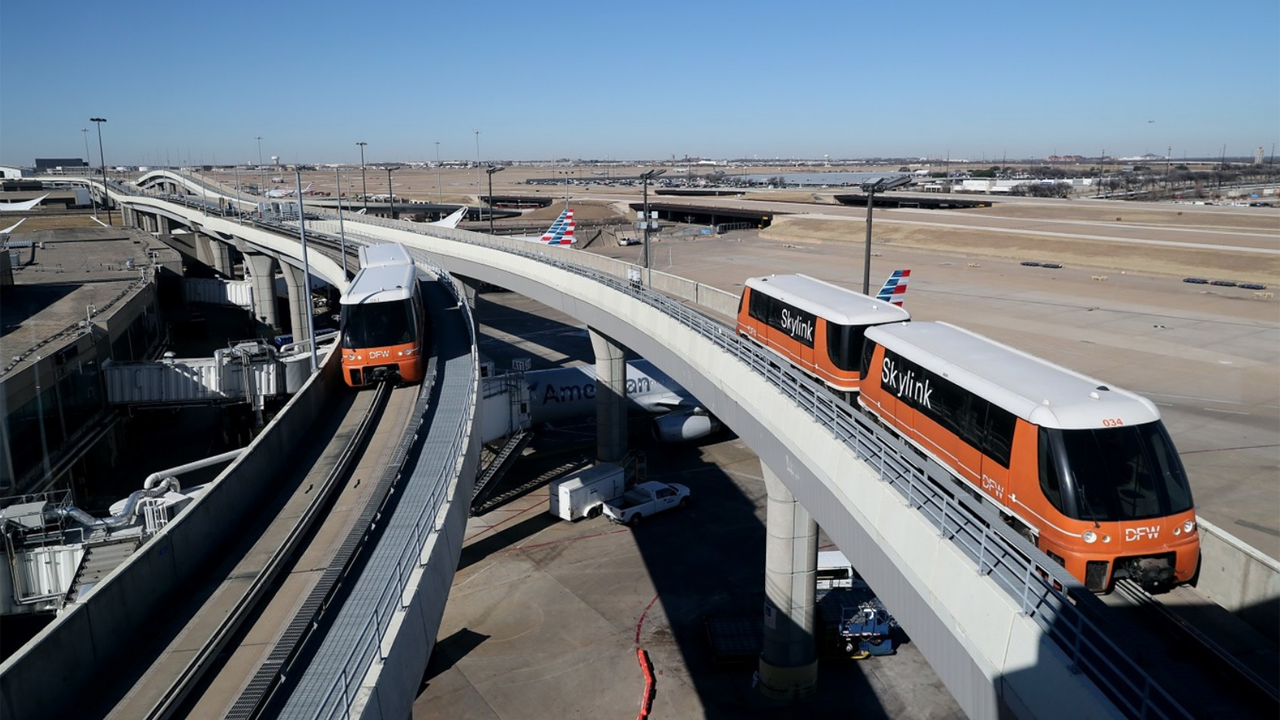 Alstom has signed a 10-year contract with DFW to provide operations and maintenance services for the Skylink automated people mover (APM). The company has provided maintenance support since the APM opened May 21, 2005. Since then, its availability has exceeded 99% each year, according to Alstom; pre-pandemic, the APM carried more than 20 million riders annually.

“We are incredibly pleased and proud to extend our partnership with Dallas Fort Worth International Airport,” Alstom Americas President Michael Keroullé said. “The customer’s renewed trust in Alstom proves our operations and maintenance expertise in helping customers provide efficient, reliable and safe service for their end users.”

In related news, the Houston Airport System in April 2021 awarded Alstom a 10-year, $105.1 million (€87 million) contract to operate and maintain the Skyway APM at George Bush Intercontinental Airport in Texas.

Southern California’s Metrolink on April 13 reported that all locomotives powering its regional/commuter rail service are using renewable fuels. The transition, completed in February, follows a 2021 pilot program that implemented a product made of recycled natural fats and vegetable oils, and will help decrease greenhouse gas emissions of carbon dioxide by up to 80%, according to the agency.

Metrolink said that it “continues to pursue zero-emissions technologies of hydrogen fuel cell and battery electric and regards renewable fuel as a bridge to zero-emissions.”

“This transition by Metrolink to using renewable fuel will help further reduce the air pollutants from our locomotives and improve the air quality for all the communities along our 538 miles of track,” said Metrolink Board Vice Chair Larry McCallon, who is also a member of the South Coast Air Quality Management District’s Governing Board.

“It’s a proud achievement to be the first rail agency in the nation to use renewable fuel to move people around southern California,” Metrolink Board Chair Ara Najarian said. “We are committed to continue working toward better air quality in our region and lessening our effect on climate change for the planet.”

Metrolinx on April 13 reported that it signed an amended agreement with Vandyk Properties to deliver an updated Mimico GO Station on the Lakeshore West Line.

The original 2019 agreement covered Vandyk constructing and integrating improvements into its planned mixed-use development adjacent to the station, in exchange for Metrolinx transferring rights to develop above the station, Metrolinx said. Since that time, Vandyk has acquired additional land around the station, presenting “an opportunity for additional station improvements to be constructed on Metrolinx’s behalf,” according to the agency.

Station improvements will include two station access points on the north side; a new, fully accessible main station building; a new secondary tunnel entrance building; 300 underground, dedicated GO parking spaces; 96 spaces for bicycle storage, including secured and covered bike parking; an integrated transit plaza with pick-up and drop-off facilities; and a greenway path for pedestrians and cyclists to access the station.

The transit-oriented community at the Mimico GO Station will now also include more housing.

Mimico GO Station was built in 1967, the year GO Transit launched, and served some 1,600 riders daily in 2019. By 2031, ridership is expected to triple, according to Metrolinx.

“This partnership will transform Mimico GO Station into a modern, integrated transit station for the community,” Metrolinx President and CEO Phil Verster said. “It is one more joint success where transit, city planning and property development are integrated—this will ensure that more people are able to rely on transit to get them where they need to go, better and faster.”

SkyTrain riders on the Expo Line can watch full-motion videos in the Dunsmuir tunnel thanks to a TransLink partnership with Vancouver-based adtrackmedia. Each tunnel advertising system, made up of 360 vertical LED lights, uses sensors to detect incoming trains so videos can be displayed automatically. Currently, 10-second silent videos are playing for riders traveling eastbound from Waterfront to Burrard Station, and in the coming months, they are expected to play for riders traveling westbound from Stadium-Chinatown to Granville Station.

“This new technology provides an innovative and immersive experience for customers traveling along the Expo Line,” TransLink CEO Kevin Quinn said. “This first-in-Canada technology is transforming marketing and communications on transit systems all over the world while also allowing agencies to collect new revenue.”

UTA has removed its Comet cars from FrontRunner commuter rail service. The 50-year-old Pullman Standard-built (Bombardier-upgraded) cars had run on New Jersey Transit; UTA purchased and began using them when FrontRunner launched in 2008. According to UTA, it “is becoming more difficult and costly to maintain the [25] cars and replace worn or broken parts, which are nearly impossible to find. The challenges of keeping the cars in good and safe operating condition for our riders necessitate their removal.” The agency said the move will help it save $600,000-$800,000 per year on fuel and maintenance costs.

UTA noted that it will retain the Comet cars in case they are “needed to provide increased capacity for large community events or unexpected spikes in ridership.”

As part of the planning efforts for future FrontRunner service, UTA said it “is evaluating options for replacement vehicles, but a decision has not been made at this time.” The agency added that it is “currently working with elected leaders and partners agencies on plans for modernization.”

WMATA has awarded a three-year contract to MITRE to assess the agency’s safety culture; develop a plan to improve safety data analytics; and deploy a secure Voluntary Safety Reporting Program (VSRP). The reporting program is slated to provide WMATA employees “with the ability to report safety hazards voluntarily and confidentially,” MITRE said. “The data captured from those reports will be analyzed, enabling proactive, data-driven identification and management of safety hazards, leading to a safer transit experience for Metrorail, Metrobus and paratransit riders.”

WMATA’s “vision is to become the industry leader in safety, and we intend to realize this vision by developing a world-class SMS [Safety Management System],” said Theresa Impastato, the agency’s Executive Vice President and Chief Safety Officer. “This partnership with MITRE is a cornerstone of our safety strategy, and we look forward to bringing MITRE’s subject matter expertise to the transit industry.”

“MITRE is leveraging our decades of experience in aviation safety to increase safety in all forms of transportation, from the roads to space,” said Dr. Christopher Hill, Director of Surface Transportation at MITRE’s Center for Advanced Aviation Systems Development. “Our collaboration with Metro [WMATA] will lead to a stronger safety culture and increase safety for riders throughout the region.”

VIA Rail Canada reported on April 14 that it will reinstate most of its service by the end of June (see chart below). Corridors in Ontario and Quebec that once hosted multiple trains were cut to one or two daily round-trips in 2020 due to the pandemic. (For a recent service report, read “Two Years After COVID: Amtrak Lags, VIA Rail Hopes.”)

“This is a celebratory and crucial milestone in our service-resumption plan after an incredibly challenging two years,” President and CEO Cynthia Garneau said. “We look forward to welcoming more of our customers back on board our trains and doing our part to encourage Canadians and tourists to get out and explore this beautiful country for the summer travel season.”