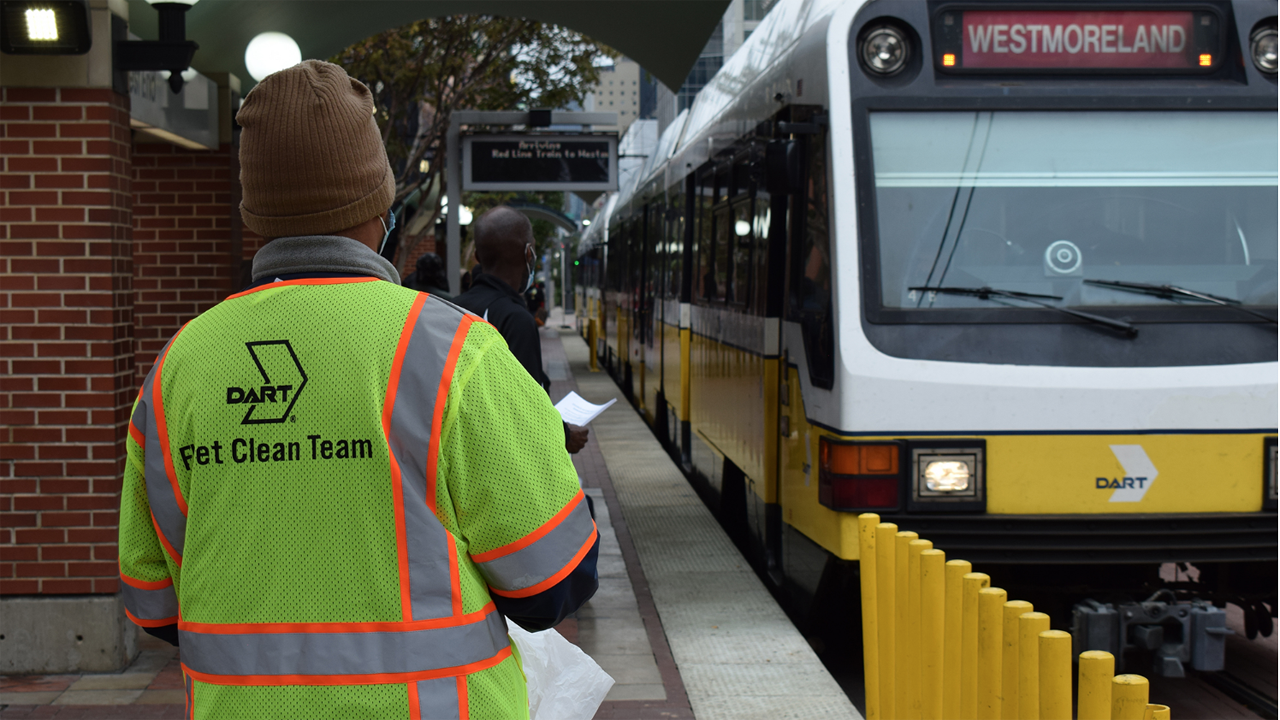 Through the new Clean Team Initiative pilot program, 24 additional contract cleaners will board light rail vehicles across the DART network on all four light rail lines throughout the day. (Photograph Courtesy of DART)

Two shifts will board LRVs along all four lines throughout the day, Monday through Friday, between 6 a.m. and 10 p.m.

Currently, each weekday night, DART LRVs receive a complete cleaning between the hours of 7 p.m. and 3 a.m., while the vehicles are at the rail yards. This includes sweeping, mopping and a complete wipe-down with an EPA-approved cleaning agent, according to DART. The LRVs are also cleaned at the eight terminus stations throughout the day, with a focus on high-touch areas. Red and Blue line trains are cleaned every 60 minutes. Orange and Green line trains are cleaned every 90 minutes.

VIA Rail on Nov. 16 reported awarding two contracts to modernize its Toronto and Montréal maintenance facilities. The work will allow for maintenance and service of the existing fleet plus the 32 new trainsets from Siemens, which began deliveries last September, and will ultimately replace the older equipment that operates along the Quebec City-Windsor Corridor.

The first trainset welcomed its first riders this month; a full commercial launch is planned for 2023, according to VIA Rail.

Concord, Ontario-based Buttcon Limited landed the Toronto Maintenance Center construction contract; Pomerleau Inc., based in Montréal, Quebec, won the contract for work at the Montréal Maintenance Center. Funding for the projects was provided in the 2018 federal budget, and construction will begin in spring 2023, according to VIA Rail.

The Acciona-GIP Joint Venture (AGJV) and STRABAG were shortlisted for the second Advance Tunnel contract on the Eglinton Crosstown West Extension in Toronto, and invited to respond to an RFP in April 2022. Both teams submitted their proposals by the RFP deadlines, Infrastructure Ontario and Metrolinx reported on Nov. 16. Their submissions will now be evaluated, and Infrastructure Ontario and Metrolinx expect to award a contract in spring 2023 for work on the 1,640-foot (500-meter) tunnel that will start east of Jane Street and connect to the future Mount Dennis Station (see map above).

The first Advance Tunnel contract for work between Renforth Drive and Scarlett Road was awarded to West End Connectors on May 20, 2021. It is valued at C$729.2 million.

The Eglinton Crosstown West Extension is being delivered via various contracts and will bring the Eglinton Crosstown LRT another five miles (9.2 kilometers) further west, creating a continuous rapid transit line from the east end of Toronto through the heart of the city and into Mississauga. With seven stops, it will operate mainly underground. It is expected to be completed by 2030-31.

According to Infrastructure Ontario and Metrolinx, the “project is one of the priority transit projects announced by the province in 2019 as part of the Subway Transit Plan for the Greater Toronto and Hamilton Area.” The other projects include the Scarborough Subway Extension, Ontario Line, Yonge North Subway Extension and Hamilton Light Rail Transit. For more, read “Metrolinx On the Move.”