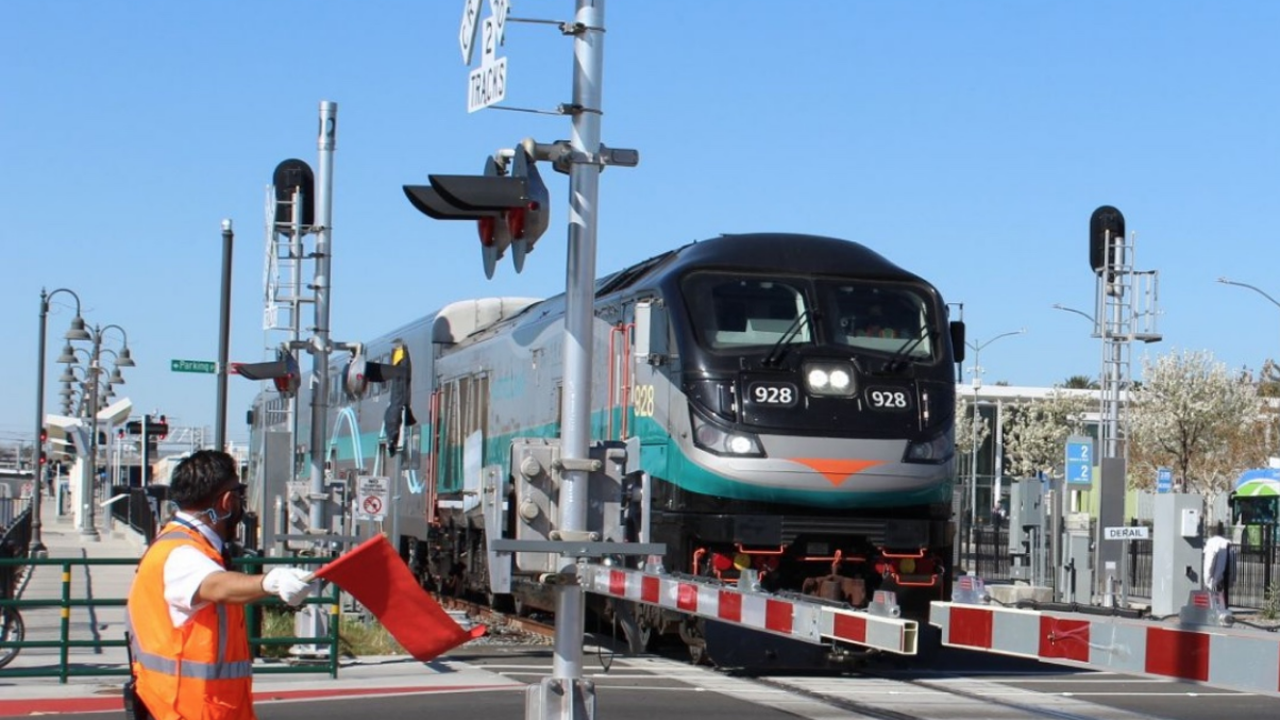 On Feb. 16, a Metrolink train traveled along the new nine-mile, five-station Arrow corridor from San Bernardino to Redlands, Calif. (pictured). It allowed crews to take clearance measurements in preparation for train testing, which kicked off Feb. 22. Revenue service is slated to begin this summer.

The Chicago Transit Board on Feb. 18 approved a new four-year (2020-23) labor contract between CTA and the Amalgamated Transit Union (ATU) Locals #241 and #308. The ATU Locals represent more than 8,000 of CTA’s 11,000-member workforce, including bus and rail operators, rail station customer service assistants, flag and track workers, and vehicle servicers.

Under the agreement, employees will receive a 9.25% wage increase as well as a 5%, one-time payment for hours worked in 2020. They also will be eligible to participate in CTA’s wellness program and subsequently obtain a reduction in health insurance premiums, CTA reported. Additionally, the transit agency said it “now has the additional flexibility to hire full-time bus operators directly from the marketplace, versus solely from its pool of existing part-time operators.”

“CTA workers have been the unsung heroes of the pandemic, working to provide the service Chicago and the region have relied on,” CTA President Dorval R. Carter Jr. said. “This contract recognizes the essential role public transit continues to play in Chicago’s pandemic recovery.”

“Based on the historic performance of similar passenger Wi-Fi upgrades across intercity fleets, the [Pacific Surfliner] upgrades will allow 35%-52% more devices to connect to the onboard network, delivering 34%-48% more data per trip,” reported Icomera, which will implement its X-Series Mobile Gateway system.

“We know the importance of providing stable Wi-Fi for our passengers,” said Donna DeMartino, Managing Director of the Los Angeles–San Diego–San Luis Obispo (LOSSAN) Rail Corridor Agency, which oversees the Pacific Surfliner service. “Whatever the purpose of their travel, the ability to stay connected truly is invaluable.”

SBCTA, in collaboration with Metrolink, on Feb. 22 began train testing along the nine-mile, five-station Arrow passenger rail corridor—also known as the Redlands Passenger Rail Project—which is slated for launch this summer.

The $359.7 million project was initiated by SBCTA and Metrolink in 2014, and will link the San Bernardino Transit Center and the University of Redlands (see map above). It is funded through federal ($86.0 million), state ($164.6 million) and local ($109.1 million, including Measure I) sources.

Three low-floor FLIRT DMU (diesel multiple-unit) trainsets from Stadler US Inc. will operate on the Arrow corridor. SBCTA placed the order in September 2017, and the first unit left Stadler’s Salt Lake City, Utah, manufacturing facility in November 2021. Each FLIRT offers 116 seats and additional standing room for 120 passengers. The design complies with Federal Railroad Administration Alternative Vehicle Technology (AVT) requirements for shared-use (passenger/freight) corridors, and meets Federal Transit Administration Buy America requirements. Additionally, SBCTA and Stadler in 2019 signed the first-ever contract to supply a hydrogen-powered train for the U.S.—the FLIRT H2, currently in development in Stadler’s Switzerland headquarters and expected to be introduced on the corridor in 2024.

Both Metrolink and FLIRT DMU trains will be used for testing the Arrow corridor tracks, grade crossing signals, and communications systems until revenue service begins. Testing will occur weekdays during daytime hours; however to accommodate slower speed testing and avoid longer delays for motorists, there will be two days of overnight testing from 7:30 p.m. to 6:30 a.m. with both Metrolink trains (scheduled for February) and DMUs (scheduled for March), according to SBCTA.

Southern California Regional Rail Authority, which operates Metrolink, will run the Arrow service, maintain the rail vehicles, and provide dispatching and maintenance-of-way services. During the morning and afternoon peak commute hours, trains are expected to operate every 30 minutes. During non-commute or off-peak hours, trains will operate every 60 minutes. Weekday and weekend service is planned to begin at 5 a.m. and run until 10 p.m. In addition to standard passenger rail service, the Metrolink regional/commuter rail express train will be extended to serve the Redlands-Downtown Station with limited-stop service to and from Los Angeles during the peak commute hours.