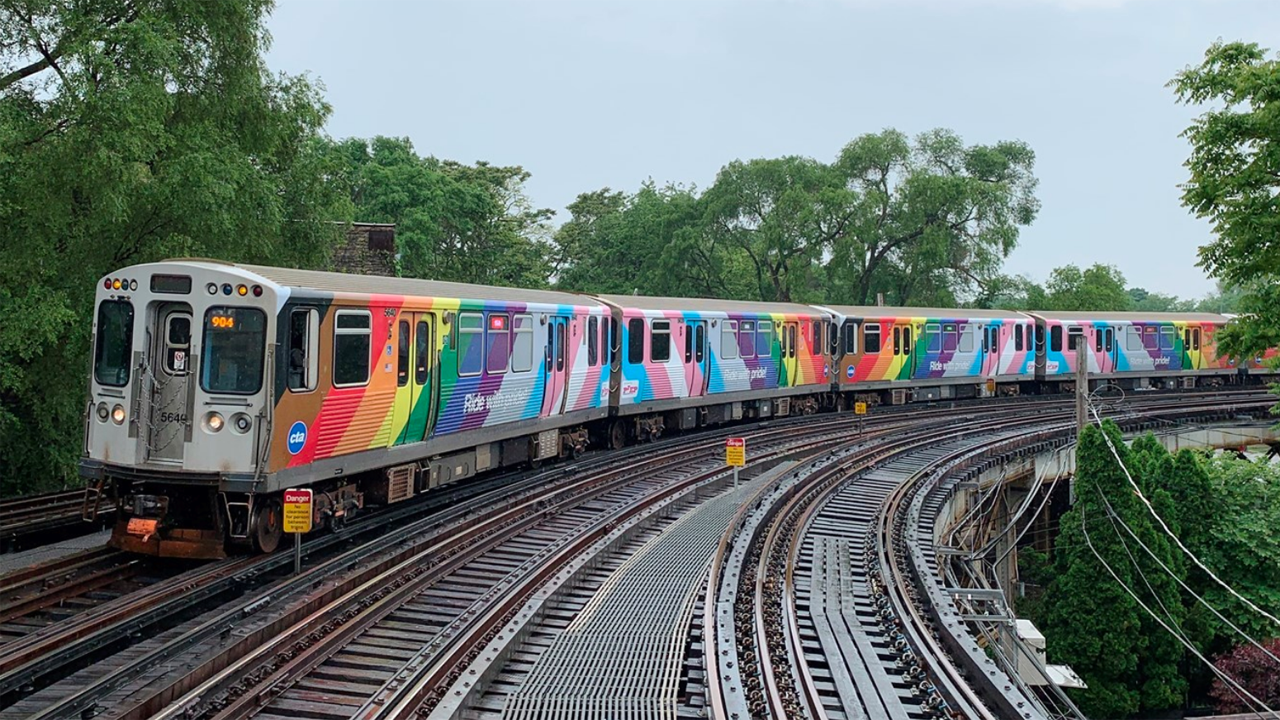 As transgender issues and rights have moved to the forefront over the last few years, CTA has added the Transgender Flag—featuring blue, pink and white—to its train wrap celebrating “Pride Month” (June). (Photograph Courtesy of CTA)

CTA is celebrating diversity and inclusion this “Pride Month” (June) with its sixth-anniversary train. The train’s updated wrap, sponsored by ViiV Healthcare and its “ReThinkPrEP.com” campaign, features both the “Philly Flag” and the Transgender Flag. “The Philly Flag adds a black and brown stripe to the traditional six-color Pride Flag,” CTA said. “Widely used across the country, it’s seen as a more inclusive expression of the traditional Pride flag. As transgender issues and rights have moved to the forefront over the last few years, the CTA also added the Transgender Flag—featuring blue, pink, and white—to the new railcar design.”

The train will serve Red Line riders through the fall.

“The Pride Train is a colorful reminder that transit is for everyone,” CTA President Dorval R. Carter, Jr. said. “We are a progressive and open-minded organization that has long supported equality and inclusion, and we want all our riders and employees to know that no matter who they love or how they identify, they are welcomed at the CTA.”

LACMTA has received a Gold Standard Award from the Transportation Security Administration (TSA).

The Gold Standard Award, TSA’s highest, symbolizes LACMTA’s “commitment to its customers, its adherence to core principles and its leadership in mass transit security,” said TSA Assistant Administrator Sonya Proctor, the agency’s lead official for surface security. “We are proud of the strong partnership between TSA and Metro [LACMTA] and commend them on their continued commitment to transportation security.”

“Safety and security are and will continue to be our No. 1 priority, and we are committed to serving as a TSA test-bed for new security technologies,” LACMTA CEO Stephanie N. Wiggins said. “We pledge to continually add new programs and services to help keep our transit customers and employees safe.”

MARTA is partnering with the Global Growers Network to establish a farm near Indian Creek rail station in DeKalb County, Ga. Produce from the farm will be available at MARTA Markets, which launched in 2015 “to provide convenient access to affordable, fresh produce in food deserts and expand opportunities for Georgia’s local growers to sell their fruits and vegetables,” according to the transit agency. MARTA operates the markets with Community Farmers Markets (CFM); their efforts are supported by Open Hand Atlanta, Wholesome Wave GA, Urban Recipe and local growers.

“The farm at Indian Creek will host a group of local farmers known as Umurima, a name that pays homage to their home country of Burundi,” MARTA reported. “Since 2010, the Umurima farmers have grown fresh food for their families and local markets on private land near Avondale rail station with support from Global Growers, an organization known for its network of farms and gardens that facilitate land access for new Americans. The group of women take MARTA to and from their homes in Clarkston and Stone Mountain to tend to their garden.”

When MARTA learned that the farm near Avondale was to be uprooted, officials stepped in. “[W]e knew we wanted to help,” interim General Manager and CEO Collie Greenwood said. “Indian Creek Station is located in an area identified as food insecure by the USDA and this partnership with Global Growers Network will support these refugee families and food equity in the surrounding communities.”

“At Global Growers, we work to uplift the extensive agricultural expertise of growers who face barriers to accessing farmland and agricultural resources,” said Robin Chanin, Executive Director and Co-founder of Global Growers. “This agreement with MARTA allows smallholder farmers like the Umurima growers to play a leading role in addressing fresh food access.”

MARTA Markets operate on Tuesdays at West End Station; Wednesdays at H.E. Holmes and Bankhead stations; Thursdays at College Park and Doraville stations; and Fridays at Five Points Station. The market at Kensington is slated to open this summer.

The new employees join the hundreds of bus and train operators and conductors who recently completed training and will help grow MTA’s ranks, according to the agency, which noted that a “hiring freeze, necessitated by a fiscal crisis that developed during the pandemic, depleted the ranks of train operators with many veteran workers retiring or leaving their frontline posts.”

“This class of train operators highlights the MTA’s focus on hiring and training improvements to achieve pre-pandemic staffing levels,” said Richard Davey, who last month became New York City Transit President. “I am proud to welcome the newest group of New York City Transit train operators; together we will provide faster and more reliable service for our customers.”

“Riders coming back to the system deserve reliable service, and these operators will help address the staffing challenges we’ve experienced,” New York City Transit Senior Vice President of Subways Demetrius Crichlow said. “Since the early days of the pandemic, train operators have been part of the group that kept the city moving, and I am excited to see this new group help bring the city back.”