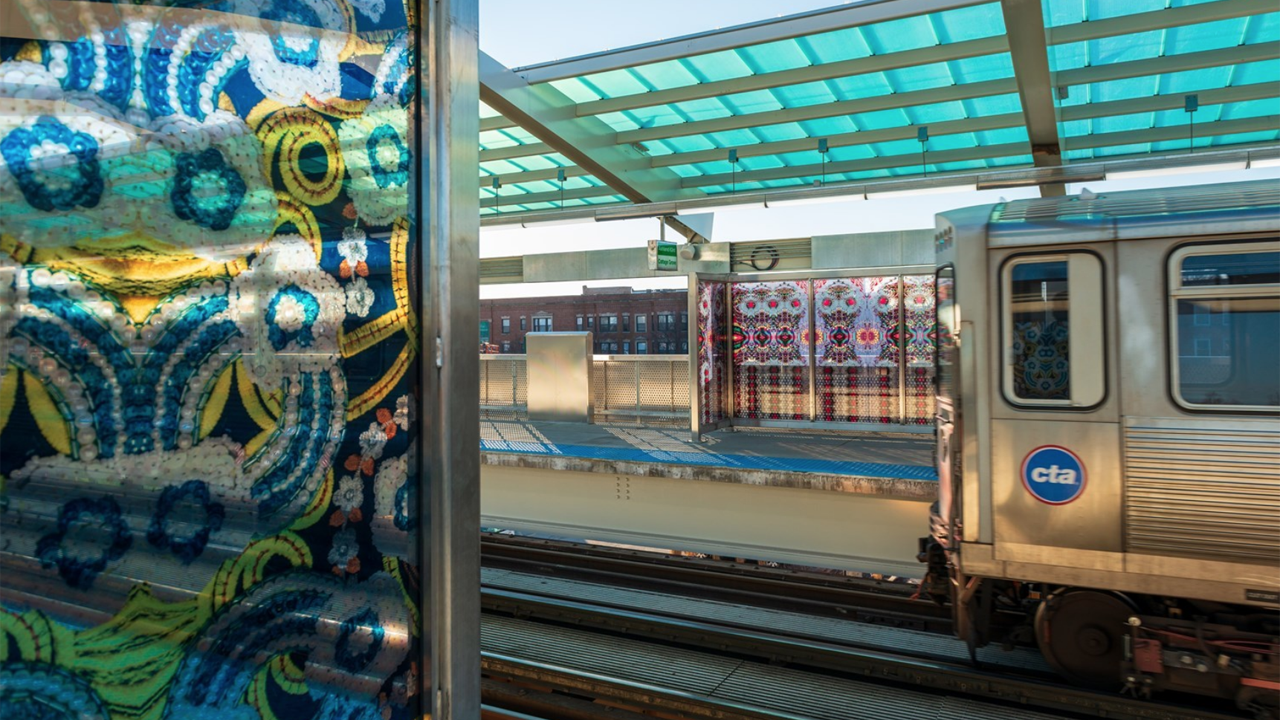 CTA has received AIA Illinois’ 2021 Greatest Impact Award for its $43 million renovation of the historic Garfield Station on Chicago’s south side.

AIA Illinois, the state component of the national American Institute of Architects, honored CTA with its 2021 Greatest Impact Award for transforming the Garfield Station into a “joyful, celebratory arrival to the Washington Park neighborhood” on Chicago’s south side.

It is the third major architectural award won by CTA for its $43 million Garfield Gateway Project, which was completed in January 2019. Last year, the station won the AIA Chicago Distinguished Building Award and Interior Architecture Award. Interior Design Magazine, which runs the design industry’s awards program, also named the facility one of three finalists in its Best of the Year Awards, a worldwide competition.

The Garfield ‘L’ station dates back to 1892 and originally served the World’s Columbian Exposition. Today, it includes two station houses—one currently serves commuters and the other is the restored, original station house, which the city of Chicago designated as an historic landmark in 2001 and now serves as a community-based arts facility.

Touch-free payment allows DART riders to pay their transit fare with a contactless credit or debit card, or a payment-enabled mobile phone or wearable device. Like using DART’s GoPass® mobile app and GoPass® Tap card, riders simply hold their card or device to any DART GoPass Tap card reader, ride and go, according to the transit agency. Readers are located on the platforms at rail stations and onboard DART buses and Dallas Streetcar vehicles; the GoPass Tap system automatically selects the best Adult Local fare for the rider.

The DART Contactless Payment system is built on Vix Pulse, a “multi-modal, multi-operator solution that unifies account-based ticketing and mobile and contactless payments into a secure, easy-to-operate and managed platform,” the agency reported.

Credit and debit cards issued on the Visa®, Mastercard®, American Express® and Discover® networks are currently accepted. Digital wallets on a smartphone, smart watch or other wearable device are supported, including Google Pay™, Apple Pay®, Samsung Pay® and Fitbit Pay™. If a credit/debit card has a chip but is not contactless, it can be linked to a digital wallet and used with a mobile device.

The program is funded with $2.3 million from Phoenix Transportation 2050 and the Phoenix Community Development & Investment Corporation. It offers two tiers of financial assistance that can be applied for annually. “In Tier I, businesses can receive $3,000 during the pilot year or they can opt to apply for Tier II where they can receive up to $9,000 depending on their demonstrated business impact,” Valley Metro said. The funds “are intended to support and help sustain these small businesses and can be used to offset business operational expenses, such as rent/mortgage, utilities, insurance and payroll.”

The program complements Valley Metro’s suite of business assistance tools that have been in place for years, such as increased signage and wayfinding; community events; social media/marketing assistance; accounting/financial planning; and dedicated, single points of contact to serve all business needs, according to Valley Metro Business Assistance Coordinator Jose Galindo.

“Light rail is an enormous and important investment in our community,” Phoenix Mayor Kate Gallego said. “It is equally important to ensure that businesses located near the rail construction zones survive and thrive. I have no doubt this much-needed assistance will keep our urban centers vibrant and active for generations to come.”

“Small businesses are the driving force of our city,” Phoenix Vice Mayor Carlos Garcia said. “Between the ongoing COVID-19 pandemic and long-term transportation construction, a grant through the Small Business Financial Assistance Program can make a big impact in keeping a business open.”