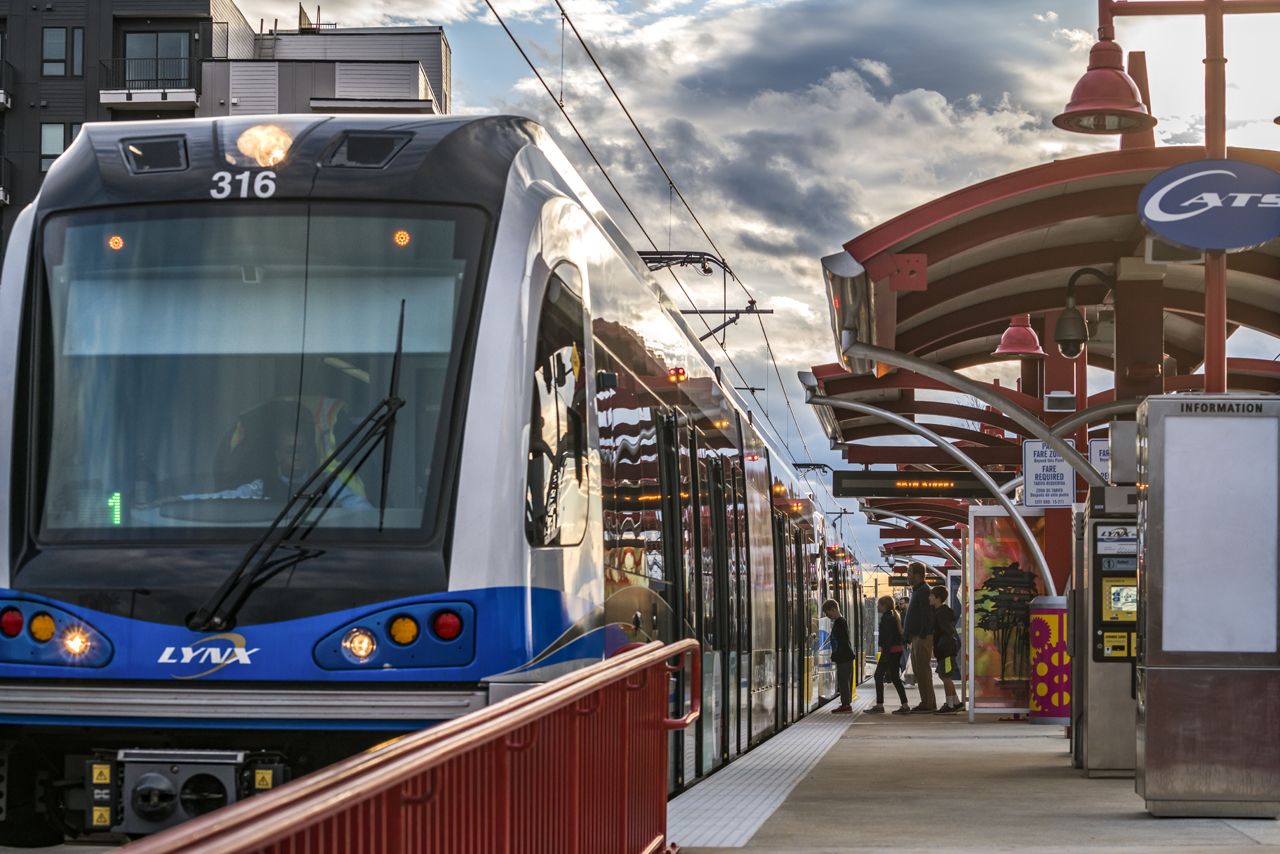 A new station is on the way for Charlotte Area Transit System’s LYNX Blue Line. (Photo by David Murphy, courtesy of HNTB)

The Charlotte City Council has approved a $1.9 million contract to Kimley-Horn and Associates, Inc., for the planning and design of a new LYNX Blue Line station, according to The Charlotte Observer. The light rail station would be located in Charlotte’s South End, between the New Bern and East/West Boulevard stations (see map above).

“City planners pegged this station as a priority in the South End Vision Plan in 2018 [download below], as the neighborhood experiences explosive growth,” the newspaper reported. “One part of uptown that dips into South End saw a population increase of roughly 720% from 2010 to 2020, according to new census data.”

While construction would be covered by public and private funding, no cost estimates have been released, The Observer reported.

Denver RTD wants to develop an equitable fare structure as well as pass program recommendations by late 2022 and to make any changes in 2023, the agency reported on Sept. 13. RTD’s original fare structure was implemented in 2016 and revised in 2019. It offers fare levels in three categories: Local, Regional and Airport (see map below). Since then, RTD “has consistently heard from customers and stakeholders that its fares and pass programs are too expensive and too complicated,” according to the agency.

The fare study and equity analysis, including “extensive multicultural outreach,” is expected to take about 18 months. Consultant proposals are due Oct. 11. RTD staff will make a recommendation to the RTD Board in November.

“It is our mission to make our customers’ lives better through connections,” General Manager and CEO Debra A. Johnson said. “The most basic question we can ask is whether our system works for them, and that answer begins with a thorough, comprehensive exploration of our fares. Today’s [Sept. 13] milestone marks the next big step in our efforts to reduce access barriers to public transit in metro Denver. I look forward to bringing the best team on board to guide us through every element of this important project.”

Metrolinx has received official confirmation from Guinness World Records that the Pickering Pedestrian Bridge (Pickering, Ontario, Canada) is the record holder for longest enclosed pedestrian bridge in the world. The 250-meter (273-foot) long bridge spans 14 lanes of Highway 401, six live railroad tracks and a two-lane municipal roadway. It was completed in 2018 after nearly a decade of planning, design and construction work.

The bridge connects the Pickering GO Station on the south side to the Durham region’s largest shopping mall, local college and regional bus service on the north side. Its “skin” is made of Kalzip, a lightweight aluminum product, that protects pedestrians from the elements. Energy-saving and weather-resistant, Kalzip also allows visibility, according to Metrolinx. “Even as you are protected from the elements, you can still see in and outside of the bridge, meaning the interior of the structure is never dark and pedestrians are always visible,” the agency reported. “This increases safety and a sense of security for those who use it daily, day or night. It also magnifies the lighting on the bridge, which means fewer lights are required, which is great benefit for reducing costs associated with its maintenance over the long-term.”

The bridge’s architecture is highlighted at night with nearly 300 LED lights in rotating shades of lilac, purple, blue and teal.

NYCT on Sept. 11 wrapped up a security camera installation project, covering all 472 subway stations. Over the past year, 200 stations have gained security camera coverage, with thousands of cameras now deployed system-wide, according to the agency.

There are two forms of security cameras used in the subway system: those that broadcast in real time to the subway’s security center, and those that record locally and provide material that can be retrieved quickly and used in the investigation of crimes, according to NYCT. In addition, similar to the New York Police Department’s “post-9/11 Lower Manhattan Security Initiative, some of the live cameras give New York City Transit the ability to spot suspicious packages and other activities that require response,” the agency noted.

“Thanks to our incredible workforce who continue to deliver for our customers and credit to [former NYCT interim President] Sarah Feinberg who from the top of New York City Transit got this program accelerated,” NYCT acting President Craig Cipriano said during the announcement. “We have delivered on Sarah’s commitment to accelerate the camera roll-out as we look to restore confidence in the system. We recognize safety and security are top concerns for our customers, as they return to our system, and this is a significant tool in our effort to enhance rider safety.”

“We at the MTA, together with the NYPD, are driven to deliver a safer and more high-level quality of life experience in the subway system and these cameras are a big part of that,” MTA Chief Safety Officer Patrick Warren said.

The MTA reported that it will “continue to expand the placement of cameras throughout the system, with a goal of optimizing coverage of stations.”