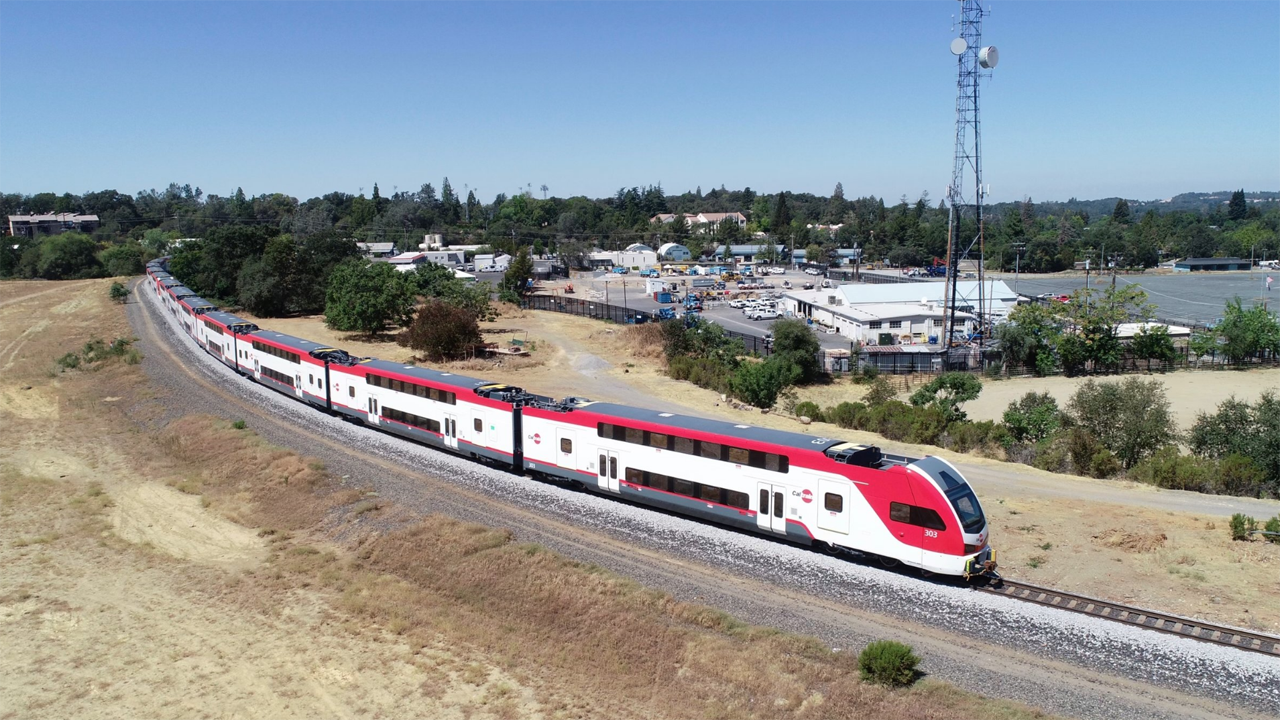 Caltrain on Aug. 22 reported that its third and fourth EMUs of 19 on order have arrived at the Centralized Equipment and Maintenance Facility in San Jose. (Photograph Courtesy of Caltrain, via Twitter)

Caltrain on Aug. 22 reported that the third and fourth EMUs of 19 on order have arrived at the Centralized Equipment and Maintenance Facility in San Jose.

The EMUs were built by Stadler US at its Salt Lake City, Utah, facility, and then tested at the Transportation Technology Center in Pueblo, Colo., before being sent to California. Caltrain will test each EMU—which includes seven cars, as opposed to the current five or six—before it starts service in 2024.

The EMUs will replace the commuter rail operator’s existing diesel fleet. Caltrain awarded Stadler a $551 million contract in August 2016 for 16 six-car KISS bilevel EMUs, with an option for a further 96 cars worth an additional $385 million. In December 2018, Caltrain exercised an option to extend the trains from six to seven cars, and ordered another three seven-car trains. They are part of the Electrification Project to upgrade and electrify Caltrain’s 51-mile double-track system from the 4th and King Station in San Francisco to the Tamien Station in San Jose (see map above).

Metrolinx has launched a partnership with FAN EXPO Canada, Warner Bros. Consumer Products, and DC to produce 5,000 DC character-themed, limited-edition PRESTO fare cards. They will be available at FAN EXPO Canada, which on Aug. 25-28 will bring together thousands of sci-fi, horror, anime, comic book and gaming fans at the Metro Toronto Convention Center.

Twenty-nine new subway train operators have graduated at NYCT, following completion of training at the New York City Transit Learning Center in Brooklyn. They are slated to help the agency tackle crew shortages and bolster the frequency of subway service.

“We will continue to aggressively hire train and bus operators to ensure we are meeting our service commitments,” NYCT President Richard Davey said. “Coupled with our overall efforts to improve employee availability, this new class of train operators will ensure that public transit is the best option for riders returning to work and school this fall.”

Alstom has delivered a cab car and a coach car for Sound Transit’s S Line commuter rail service from Lakewood to Seattle. They are part of a $46.5 million, 11-car order (three cabs and eight coaches) approved by the Sound Transit Board in 2020. That order was an option to a 1998 contract with Bombardier (acquired by Alstom in early 2021) for 38 coaches, worth $74.7 million.

A second shipment of two more cars is expected in mid-September, according to Sound Transit.

The 11 new cars will increase the Sounder railcar fleet to 78, which includes both cab and coach cars. All the new cars will go through inspections, systems testing and commissioning before being put in service. The first of the new cars are expected to begin operating this fall.