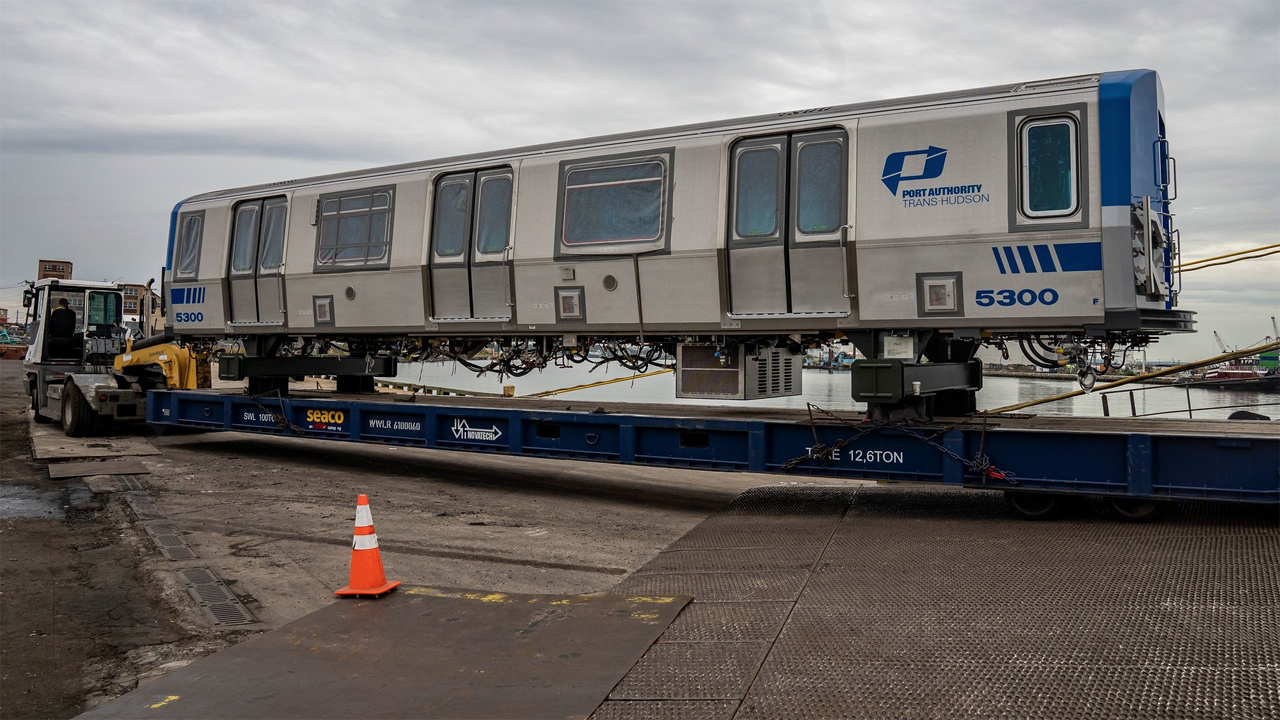 On Sept. 11, the first two of 72 Kawasaki-built rapid transit cars for the Port Authority of New York and New Jersey’s PATH system arrived at Port Newark via a Ro-ro vessel originating in Japan. (Credit: PANYNJ)

California Gov. Gavin Newsom has signed a bill requiring the Workforce Development Board, Division of Occupational Safety and Health, Santa Clara Valley Transportation Agency (VTA), and Health and Human Services Agency to “work together to draw from the lessons and successes of the VTA Wellness Center and develop a model for the deployment of Wellness Centers in transit agencies statewide to provide services and support to workers and their families,” FOX 40 in Sacramento reported on Sept. 14.

California Sen. Dave Cortese (D-San Jose) authored the legislation, which stems from the May 26 shooting at VTA’s Guadalupe Yard. There were 10 fatalities and multiple injuries. The gunman, a VTA employee, was among the dead.

According to FOX 40, Cortese teamed with VTA unions and management, Santa Clara County Board of Supervisors, and the district attorney’s office “to respond to the pressing needs of the [VTA] employees, including through standing up a Resiliency and Trauma Recovery Center, or ‘Worker Wellness Center,’ that has provided behavioral health support to individuals and families dealing with grief.”

“Through support services such as peer-to-peer counseling, prevention and early intervention training, we can reduce stress and improve morale so that everyone can feel safe at their place of work,” FOX 40 quoted Cortese as saying. “I am grateful to our Governor for signing this legislation, as well as to the workers who crafted this legislation with me to prevent further tragedies and loss of life.”

Ground was officially broken Sept. 14 on a new $87.14 million train station plus roadway safety and track improvement project in Windsor Locks, Conn. Connecticut Gov. Ned Lamont was joined at the event by Connecticut Department of Transportation (CTDOT) Commissioner Joe Giulietti, Amtrak Assistant Vice President of Infrastructure Access and Investment Tom Moritz, members of the Connecticut Building Trades, and other state and local officials. According to the Governor’s office, this is the first rail station project in the state to include a project labor agreement and workforce apprenticeship program. The station will serve The Hartford Line—which launched four years ago through a partnership between CTDOT, CTrail and Amtrak—and Amtrak.

The new station will include a high-level platform to allow for level boarding. Additionally, connections to the Canal Trail via Bridge Street will be established. Bus connections to Bradley International Airport will continue. Also, roadway safety and track improvement projects will be under way.

Project funding comes from $59.11 million approved by the State Bond Commission in 2020; a $17.49 million grant from the Federal Railroad Administration; and an estimated $10.54 million contribution from Amtrak, which owns the track and rail line. The project is slated for completion in summer 2025.

“It’s because of the relationships and partnerships we have at the local, state and federal level that we can move this project along,” Commissioner Giulietti said.

“Upgrading the infrastructure in Windsor Locks highlights the future of this town’s train service with a new station, addition of a second track, and improved traffic and railroad signal equipment to promote better and safer movement of people and freight, enhance regional rail travel, and improve rail connections in New England,” Amtrak’s Tom Moritz said.

MARTA during a Sept. 12 public meeting outlined its planned two-mile streetcar line extension, which would provide service from Jackson St. at Edgewood Ave. to the Atlanta BeltLine Eastside Corridor from Irwin St. to Ponce de Leon Ave. The current 2.7-mile-long streetcar loop launched in 2014; MARTA took over operations in 2018, according to a Sept. 14 report by The Center Square news service in Georgia.

With an up to $250 million price tag, the Streetcar East Extension project is slated to be funded by the More MARTA Atlanta half-penny sales tax that voters in Atlanta approved in 2016, the news service reported. Extension construction is expected to begin in 2024, with the line opening in 2027.

NJT, through its advertising partner Intersection, has entered into a multi-year program with BetMGM, which includes print and digital advertising throughout the transit system, as well as renaming the Meadowlands Rail Line, which operates between Secaucus Junction and the Meadowlands Station adjacent to MetLife Stadium for select events.

Under a three-year sponsorship, the rail line will be renamed the BetMGM Meadowlands Rail Line. The agreement on naming rights, NJT said on Sept. 14, “is a first of its kind” for the transit agency.

“This unique advertising partnership represents a significant new source of revenue for NJ Transit,” NJT President and CEO Kevin S. Corbett said. “This new and innovative partnership is part of our continued commitment to leverage NJ Transit assets to maximize non-farebox revenue and help keep fares stable for our customers.”

NYCT on Sept. 13 reported the graduation of 27 new train operators following their completion of training at the NYCT learning center in Brooklyn. These operators are slated to help the transit agency tackle crew shortages and bolster subway service frequency.

“The new employees join the hundreds of bus operators, train operators and conductors who recently completed their training,” NYCT reported. “A hiring freeze, necessitated by a fiscal crisis that developed during the pandemic, depleted the ranks of train operators and conductors with many veteran workers retiring or leaving their frontline posts. Along with improved recruiting efforts and speeding up training for new employees, the MTA addressed the staff shortage by bringing back recently retired train operators, scheduling additional overtime and buying back vacation time.”

The first two of 72 new Kawasaki-built rapid transit cars have been delivered for the Port Authority of New York and New Jersey’s PATH system. Currently PATH has about 350 cars in service, with the new cars—ordered in 2018—set to increase the railroad’s rolling stock by more than 20% when delivery is complete by the year-end 2023.

The two railcars were off-loaded at Port Newark on Sept. 11, following a trip from Japan. They were transported to a Kawasaki facility in Yonkers, N.Y. where they will be fitted out and tested before being put into service in the PATH system, according to the Port Authority of New York and New Jersey.

“This initial batch of cars represents yet another step in the Port Authority’s $1 billion investment in PATH to improve the comfort, convenience and reliability of the system for passengers,” Port Authority Chairman Kevin O’Toole said.

“The PATH Improvement Plan is a critical initiative in the modernization of our system and in providing enhanced service to the riding public,” Port Authority Executive Director Rick Cotton said. “The arrival of the first new railcars, combined with the soon-to-be-completed expansion of PATH stations and platforms to enable nine-car trains on the Newark to World Train Center line, sends a clear message that we are making good on our promise to our customers.”

“As Canada mourns the passing of Queen Elizabeth II on Mon., Sept. 19, the TTC will pause all service for 96 seconds at 1 p.m.,” the transit agency reported on Sept. 14. This “stop and stay” is part of the city of Toronto’s coordinated tribute to Her Majesty on the day of her funeral, also a National Day of Mourning in Canada.

According to TTC, all subway trains will be held at station platforms; bus and streetcar operators will stop their vehicles at regular service stops prior to 1 p.m. and remain there until the moment of silence has concluded; and Wheel-Trans vehicles will be brought to a stop at a safe location. Subway station announcements and social media posts will also be suspended during this time.

TTC said it will notify customers of this tribute both prior to and during it through announcements as well as on-screen messages, social media posts and on its website.