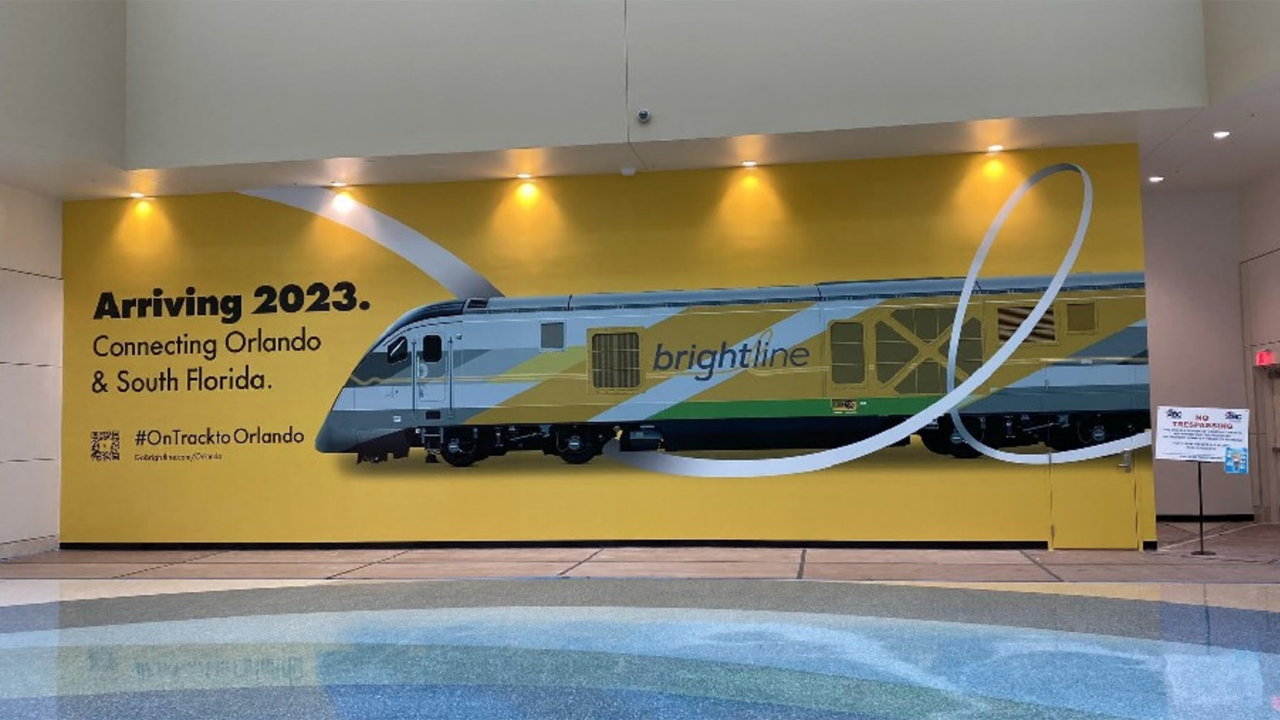 Brightline on Sept. 17 posted on Twitter: “See you next year, Orlando. Construction is 83% complete & our Orlando Station is taking shape!” The station is located in Orlando International Airport’s new Terminal C, which opened to the public on Sept. 20. (Photograph Courtesy of Brightline, via Twitter)

Brightline is expanding its Phase 1, 67-mile Miami-to-West Palm Beach line north to Orlando. Work is expected to wrap up at the end of the year, with service starting in early 2023. According to a Bloomberg report last month, Brightline was to sell up to $1 billion of tax-free debt to finance the $2.7 billion project.

Brightline’s Bright Pink 2 and Bright Green 2 arrived July 21 at the railroad’s Vehicle Maintenance Facility in Orlando after traveling the 3,000 miles across 10 states from the Siemens Mobility North American plant in Sacramento, Calif.

The two six-car trainsets, which will carry passengers between Orlando and South Florida, consist of two locomotives and four passenger coaches each. The trainsets are among five new ones to arrive in Florida in preparation for the opening of the Orlando extension. The first train, Bright Red 2, arrived in October 2021, traveling through Brevard, Indian River, St. Lucie, Martin and Palm Beach counties to its destination in West Palm Beach. The second train, Bright Blue 2, arrived in Orlando in February 2022. The final trainset is expected to arrive in Florida later this year.

MBTA will use federal pandemic relief funds to balance this year’s budget, “but is facing a deficit that could grow to more than $400 million in fiscal year 2024 when that aid runs out,” according to a Sept. 16 Boston Herald report.

Without $948 million in pandemic aid, O’Hara said MBTA would have had a nearly $132 million budget deficit in 2022, according to the Herald. “Instead, the MBTA saw higher-than-budgeted revenue and lower-than-expected expenses in FY22, which she [O’Hara] attributed to higher fare revenues, and lower wages and fringe benefits due to job vacancies and difficulties with hiring,” the newspaper reported. According to a budget presentation, the paper said, the “budget’s overall net revenue was $816 million, which was transferred to its operating deficiency fund, leaving $500 million in available funds to fill gaps in FY23 and ’24. …

“However, expenses could grow significantly this year, as the MBTA is looking to fill more than 2,000 positions. The budget could also be strained by uncertain ridership, high fuel prices, and continued inflation, the presentation showed.

“While the T is projecting fare revenue will be twice as much as last year, it will still be nearly half of what was seen pre-pandemic, and will only support 24% of operating expenses.”

According to the Boston Herald’s report, the budget gap in FY24 is projected to be between $236 million and $421 million, depending on different ridership scenarios, and will increase to $550-plus million in four years.

O’Hara said during the meeting that MBTA “cannot reduce service levels or increase fares based on the T’s core mission to offer a transportation system for the area, and for the near term management has elected no fare increases due to a focus on riders returning to the system,” according to the newspaper. “What we are left with is a very small amount of dollars that can be impacted by the T,” the paper quoted O’Hara as saying.

The Boston Herald noted that MBTA has also “projected it will cost $300 million to comply with the four initial [safety] directives issued [by the Federal Transportation Administration] in June, and O’Hara said the finance team is working to ‘size’ the cost of the rest.”

While the Massachusetts Legislature has allocated $666 million in one-time federal funding to compliance and Gov. Charlie Baker has set aside $200 million, “Audit & Finance Committee Chair Betsy Taylor said more support will be needed for recurring [directive] costs,” according to the newspaper.

WMATA is facing a $185 million deficit for the July 2023-to-June 2024 fiscal year, “a drastic reduction from previous estimates of $500 million and $350 million,” according to the DCist, which said the transit agency “arrived at this improved position in part via cost savings and increased ridership, according to a presentation made public Monday [Sept. 19].”

Mitigation measures for the shortfall could include “train turnbacks to account for changing ridership, large fare structure overhauls (including potential fare increases), and more,” the online news site reported Sept. 19. “The list of proposals does not include drastic service cuts like those proposed in previous years. The presentation is the first step to passing a budget by March.”

Affecting the transit agency’s business model are ridership changes due to the pandemic.“Metro officials say they are seeing less use of end-of-line stations and other suburban stations, but more ridership in the core and fast-growing parts of the region, like the southern ends of the Green and Yellow lines which include new developments, major sports venues, and National Airport,” according to DCist. “Metro wants to capture all the entertainment, travel, and non-discretionary customers it can.”

DCist reported that WMATA’s $2 billion budget could include the following, per the presentation: train turnbacks “to create more service frequency in the core by ‘turning back’ some trains at stations farther out in the suburbs”; fare restructuring, with such options on the table as “charging more for rail trips, changing or eliminating its peak and non-peak pricing model, and changing to a zoned-fare structure on rail instead of different prices for each destination”; rail operating hours changes, which could include “earlier opening times on Saturdays and Sundays (currently 7 a.m.) and later closing times on Friday and Saturday (currently 1 a.m.)”; addressing fare evasion; and bus changes.

DCist reported WMATA will also make accounting changes. The transit agency’s “largest funding source is tax dollars from local jurisdictions, but a 2019 law put a 3% increase cap on funding from localities,” according to the news site. “Metro is considering seeking to increase that cap to 5%, which would yield an extra $24 million, according to the presentation.” Additionally, WMATA is slated to receive $125 million annually from the Infrastructure Investment and Jobs Act, which will allow it to focus on preventative maintenance. The presentation, according to DCist, “is described as laying out the table for what’s to come.” WMATA General Manager Randy Clarke is slated to present a formal budget proposal to the Board in November.

LACMTA, Los Angeles Community College District (LACCD) and the office of U.S. Sen. Diane Feinstein (D-Calif.) on Sept. 21 will officially announce that LACCD has secured a $1 million grant through the Congressional Directed Funding process to extend LACMTA’s GoPass Program through the 2022-23 academic year. Students at all 21community colleges in LA County will be eligible to receive a GoPass that they can use to ride LACMTA trains and buses for free, according to the transit agency.

Metro Transit in Minnesota has renewed its advertising contract with Intersection. Under the new five-year contract, Intersection will help expand static and digital advertising across the transit agency’s network of 100 bus routes, two light rail lines and a commuter rail line, and continue to support the rollout of more than 40 new digital bus shelter screens, which will be installed at 30 shelter locations over the next year.

“We are always looking for ways to provide easier access to real-time transit information for our riders and to improve their experience at our bus stops and rail platforms,” said Wes Kooistra, General Manager of Metro Transit, an operating division of the Metropolitan Council, which serves the seven-county Twin Cities region. “These digital shelter displays support ongoing efforts in each of these important areas.”