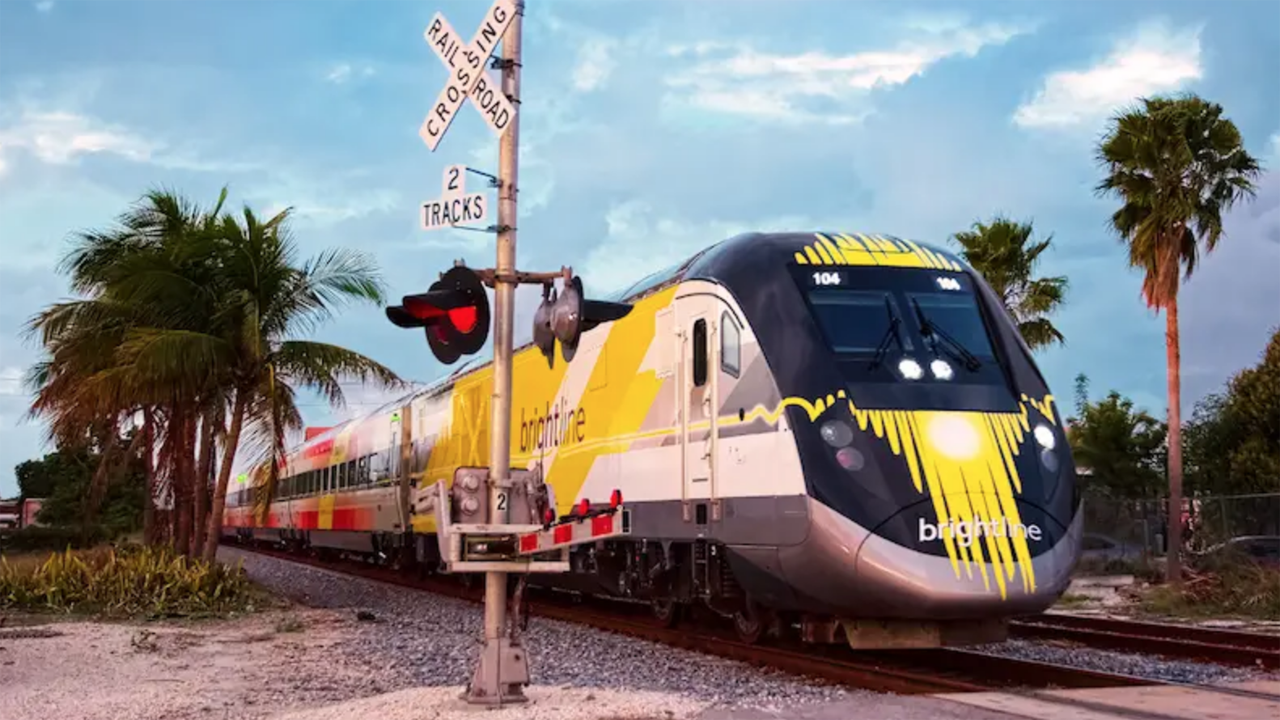 Brightline will begin testing trains up to a maximum speed of 110 mph, in preparation for opening its $2.7 billion extension to Orlando, Fla., in 2023. (Photograph Courtesy of Brightline)

Brightline on Oct. 3 reported that it will be testing trains up to 110 mph, in preparation for launching its $2.7 billion extension to Orlando, Fla., in 2023. Testing will occur in phases along the 129-mile rail corridor between West Palm Beach and Cocoa, through Palm Beach, Martin, St. Lucie, Indian River and Brevard counties. Starting the week of Oct. 17, the first phase will run for six weeks along an 11-mile section of track, spanning nine railroad crossings between Martin and St. Lucie counties.

Brightline said all highway/rail grade crossing safety improvements have been installed, including crossing gates, signal systems, pedestrian gates, pavement markings and roadway profiles. Where trains will operate at 110 mph, all crossings have quad gates or medians to prevent motorists from driving around lowered crossing gates.

According to the Boston Herald, MBTA Chief of Capital Transformation Angel Pena said the agency is working to obtain the additional $1 billion needed to improve the Orange and Red lines.

While MBTA was able to complete the Orange Line work during the recent 30-day blitz, “there’s still much work to be done to improve reliability and build back trust with our riders,” Pena said.

According to MBTA officials, the Red Line needs new track and significant expansion at Codman Yard, while the Orange Line needs more track work in the Southwest Corridor, a new signal system, and more maintenance.

The T is planning to close parts of lines for work over the next six to 18 months, according to MBTA General Manager Steve Poftak.

Next spring, MBTA will release two separate plans for “furthering the transformation” of the Red and Orange lines, according to Pena.

“It is our hope that lessons learned during [the blitz] can serve as a roadmap for future ventures where the aim is to increase the longevity of our system and improve the safety, accessibility, reliability and service,” the Herald quoted Pena as saying.

In other developments, the town of Acton, Mass., has joined MBTA’s Youth Pass program, which helps provide affordable transit access for young people with low income. It is the 33rd community to sign on.

The Youth Pass is a card that can be used by eligible young adults to purchase roughly 50% reduced one-way fares and/or $10 7-Day LinkPasses or $30 monthly LinkPasses for the bus, subway, and Commuter Rail Zone 1A stations at MBTA Fare Vending Machines, the CharlieCard Store, fare boxes on buses and trolleys at street-level stops, or at retail sales locations. Youth Pass cards can also be used to purchase half-price one-way fares and monthly passes for Commuter Rail, Express Bus, and ferry.

To qualify for the Youth Pass, a young person must live in a participating city or town and either:

“Better access to transit is a critical component in increasing broad access to jobs and educational opportunities, and we’re so glad to see this option now provided to young adults in the Acton community,” MBTA General Manager Steve Poftak said.

Following is a transcript:

According to MTA, the messages “build on renewed commitments from Mayor Eric Adams and Commissioner Sewell to deploy more officers to patrol the subway system, both on trains and platforms, as a part of the Subway Safety Plan announced by the mayor in February.”

“The New York City transit system is the largest in the country and with more riders returning to the subways each day … it’s vital that we continue working together to keep the system safe,” Police Commissioner Sewell said. “This is what we mean when we say that public safety is a shared responsibility, particularly in a transportation system where the riding public is a force multiplier for the NYPD’s work in ensuring the highest levels of safety and security.”

SEPTA on Oct. 4 issued “Leading the Way: SEPTA’s Response to Safety and Security,” outlining its strategy for addressing safety, security and the challenges of the vulnerable population on its system. (See PDF above.) That population, which includes individuals experiencing homelessness, substance abuse and mental health issues, has increased in recent years, according to SEPTA, prompting the agency in 2021 to create the SCOPE (Safety, Cleaning, Ownership, Partnership and Engagement) program to connect vulnerable individuals with social services and to provide a “safe, clean transit system for riders and employees.”

SCOPE, in its first year, mobilized partners in government, nonprofit and business sectors, and academia to help address the challenges of the vulnerable population, according to SEPTA, which also enhanced its security measures, increased its cleaning schedules, and expanded the number of social service outreach workers on the system from seven to more than 50.

“The new strategic plan lays out in detail what the problems facing the Authority are, where they are on the system, and what SEPTA is doing about them,” SEPTA reported. “It also shows what every individual—from riders and employees to policymakers and the business community—can do to help.”

“As workers return to offices throughout the region, SEPTA will continue to rely on its SCOPE strategy to ensure that its system is safe, clean, reliable and efficient,” SEPTA Chief Operating Officer Scott Sauer said. “There is nothing more important to us than the safety of our riders, the vulnerable individuals on our system, and our 9,000-plus employees.”

“SEPTA knows that riders have concerns about safety and security on the system, and we are addressing them,” said acting Police Chief Charles Lawson. “We have increased police visibility to deter crime, and we are closely monitoring feedback from our customers to respond to quality-of-life concerns.”

SEPTA said it will continue to release regular SCOPE impact reports that provide key performance indicators, such as the number of referrals of vulnerable individuals to services and the cleanliness scores of stations and platforms.

WMATA has a message for fare evaders: operating trains and buses isn’t free. On Oct. 4, the agency began a warning campaign to alert riders who neglect to pay fares that there are fines associated with fare evasion in each jurisdiction.

According to WMATA, the warning campaign is starting with notices displayed on digital signs throughout the system. After the digital signs run for two weeks, WMATA police officers and other personnel will distribute fliers to fare evaders with the same warning information.

The campaign is designed to raise awareness of fines currently associated with Maryland and Virginia and to inform fare evaders of the new civil penalties in the District that will take effect in November.

When the warning period concludes November, officers will issue citations to anyone caught not tapping SmarTrip® cards or mobile phones at fare gates, exiting emergency gates in stations, and not tapping fare boxes on WMATA Metrobuses.

Using data from Metrobus and pre-pandemic industry averages for WMATA Metrorail rapid transit service, the agency said it “conservatively estimates revenue losses due to fare evasion [at] $40 million in fiscal year 2022 or 22% of the total upcoming budget gap.” The agency said that new faregate technology, currently being installed, will allow it to more accurately measure the scale of the problem.

WMATA General Manager and CEO Randy Clarke said that “the region needs to decide what we want Metro [WMATA] to be, and fare policy should be part of the conversation. Many people have mentioned going to a fare-free model, but fare-free does not mean free. There are costs associated with running the community’s transit system and therefore the necessary revenues must exist to deliver the services the community needs.”