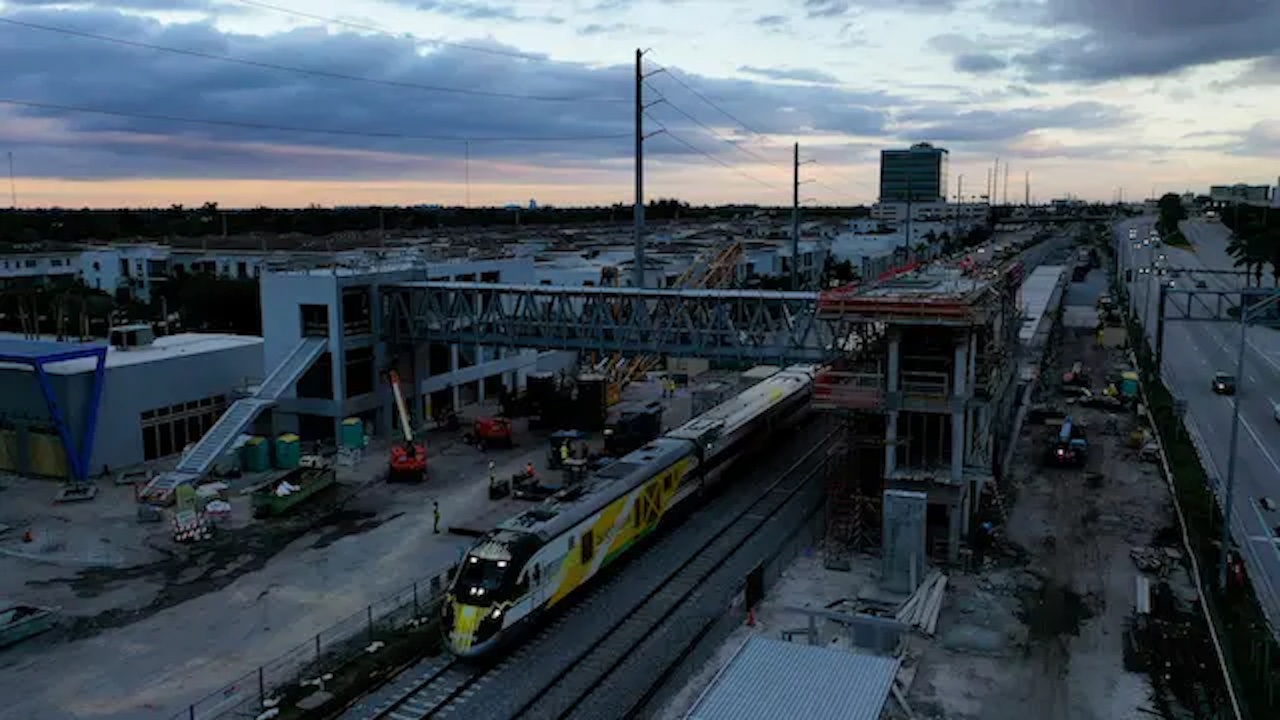 Brightline's 34,000-square-foot Aventura station and platform is expected to open for service this December.

Brightline announced on Oct. 14 that, along with its contractor Lemartec, it has completed vertical construction of Aventura Station by putting into place a 131-foot-long, 68-ton pedestrian skybridge on two 41-foot-high towers over a 90-minute period. The 34,000-square-foot station and platform is expected to open for service this December.

The skybridge, which topped off in the early morning hours of Oct. 8, stretches across Harriet Tubman Highway (formally known as West Dixie Highway) and is the final piece of the Aventura Station’s structure connecting the station to the platform.

“This topping off is a testament of our team’s dedication to bring the vision of connectivity to the Northeast Corridor (NEC),” said Brightline President Patrick Goddard, president at Brightline. “Our partners at Miami-Dade County were an integral part of making this station a reality and bringing enhanced access to area residents.”

Once completed, the 3.5-acre project consisting of the station and its surface parking lot will be Brightline’s fourth in the state, connecting travelers in Miami, Fort Lauderdale, Boca Raton and West Palm Beach, followed by Orlando in 2023. The site also features 240 parking spaces, a bus drop-off for Miami-Dade Transit passengers, and newly landscaped and hardscape areas.

Located across from Aventura Mall at 19796 West Dixie Highway in Miami, Fla., Brightline’s Aventura station, platform and vertical towers feature 34,000 square feet of space and an 860-foot center loaded platform located within the Florida East Coast Railway and Brightline right-of-way. The station will include MRKT, SMART and PREMIUM lounges and Brightline+ services. After passing through security, Brightline says passengers will be able to access the skybridge from the passenger lounge utilizing an elevator or escalators to the vertical transportation towers.

“A tremendous amount of effort and energy went into what culminated in the lifting and setting of Aventura Station’s pedestrian skybridge,” said Lemartec President Manny Garcia-Tunon. “With the help of Miami-Dade County and Florida East Coast Railway, Brightline and Lemartec were able to safely facilitate the coordination of this top off ensuring roads and railroads were clear.”

Brightline will provide frequent, express service from the Aventura station to downtown Miami during the peak morning commute period and return service during the evening rush hour period. Trip time between downtown Miami and Aventura is expected to take about 15 minutes.  Miami-Dade County will offer subsidized fares for a percentage of riders between Aventura and MiamiCentral.

In October 2019, the Citizens’ Independent Transportation Trust (CITT) passed a resolution to approve the property acquisition and development agreement between the County and Brightline. It also approved the use of $76.7 million of surtax dollars for the development of this project, which will serve the NEC–one of six corridors in the Strategic Miami Area Rapid Transit (SMART) Plan. According to Brightline, the $76 million investment made by Miami-Dade County has created more than 400 jobs during construction and will continue to generate significant economic benefit, including $90.8 million annually in economic impact and $2.7 billion over a 30-year period.

The Chicago Transit Board today on Oct. 14 approved two new measures that will allow CTA to begin the process of acquiring previously identified properties needed as part of the Red Line Extension project– “one of the most critical investments in CTA’s history, and a transformative investment for Chicago and its Far South Side communities.”

According to CTA, the planned $3.6 billion RLE project will extend the Red Line 5.6 miles from the existing southern terminal at 95th Street to 130th Street, while also providing connection to jobs, education and commerce, and serving as a catalyst for economic development. As part of construction work, four new accessible rail stations will be added, plus a new a modern, efficient railcar storage yard and maintenance facility that will benefit users of the entire Red Line.

Completion of the RLE project, the CTA says, is dependent on securing funding, but this Board action allows CTA to commence the process of negotiating and purchasing up to 216 previously identified property parcels, of which 103 are privately owned. Of the privately owned parcels, 64 are occupied and either commercial or residential. CTA informed property owners approximately six years ago of the possible acquisitions.

According to the CTA, the RLE plans were designed to minimize the amount of private property needed for construction. Commencing these acquisition efforts now, the agency adds, will help expedite overall project development and ensure CTA maintains its timeline to begin construction as early as 2025.

To aid in the property acquisition process, also approved was a new intergovernmental agreement between the CTA and the Cook County Land Bank Authority (CCLBA). As part of this agreement, CTA says it will pay the CCLBA up to $3.83 million for the acquisition, holding and maintaining of the 55 vacant parcels, until it is ready to take ownership.

CTA says it will adhere to the guidelines of the Uniform Relocation Assistance and Real Property Acquisition Policies Act, along with state and federal statutes, to “assure full protection of the rights of each property owner.” Among other requirements, these guidelines state that CTA must offer at least fair market value for any property it seeks to acquire, as well as provide financial assistance and relocation services for those who must move because of the RLE project.

CTA says its outreach team continues to work with both property owners and tenants within the communities regarding next steps and coordination for pre-acquisition activities is ongoing. CTA will continue working with a dedicated team of community liaisons as it moves forward with the RLE planning process, the agency adds.

“2 Across”, an off-Broadway play by Jerry Mayer about two strangers tackling the New York Times crossword who meet on an empty BART train at 4:30 a.m. at SFO has made its way to local playhouse Pacifica Spindrift Players, “a little gem of a theater in the woods,” according to set designer Barbara Williams. The play follows a woman, a psychologist, who is organized and rational, and an unemployed man, who is flighty and free-spirited. They spar, attacking one another’s views and values, only to find themselves changed as the 80-minute train ride comes to an end at the last stop on the line–Pittsburgh/Bay Point Station.

First opening off-Broadway in 2015, starring Kip Gilman and Andrea McArdle, “2 Across” will run at the Pacifica playhouse for two weekends, from Oct. 28 to Nov. 6. Tickets are $25 for seniors (55 and up) and students and $30 for adults.

Unlike the off-Broadway iteration, however, which saw Gilman and McArdle acting on a set that looks like a BART train, the Pacifica Spindrift Players’ production has “a strong air of authenticity.” The production uses real BART seats and an authentic BART System Map, among other set pieces.

“Take those seats, flush the stage out with walls, add a BART map and signage, and you have a sense of realism to the piece that wouldn’t be there otherwise,” said James Sousa, a longtime volunteer who’s helping with the production.

“Those seats alone will evoke in everyone’s mind exactly where this is: a BART train,” he added.

Craig Cummins, the play’s director, said it certainly “takes a village to get a production going.”

The play was sidelined repeatedly by the COVID pandemic, Cummins said. It was initially suggested by actor Debi Durst, a longtime theatrical figure in the San Francisco Bay Area, and took some time to get off the ground. “That’s why this opening, though delayed a week due to unforeseen circumstances, feels so special.”

And the authentic set pieces, well, “it really sets the scene for the actors and audience,” Cummins said.