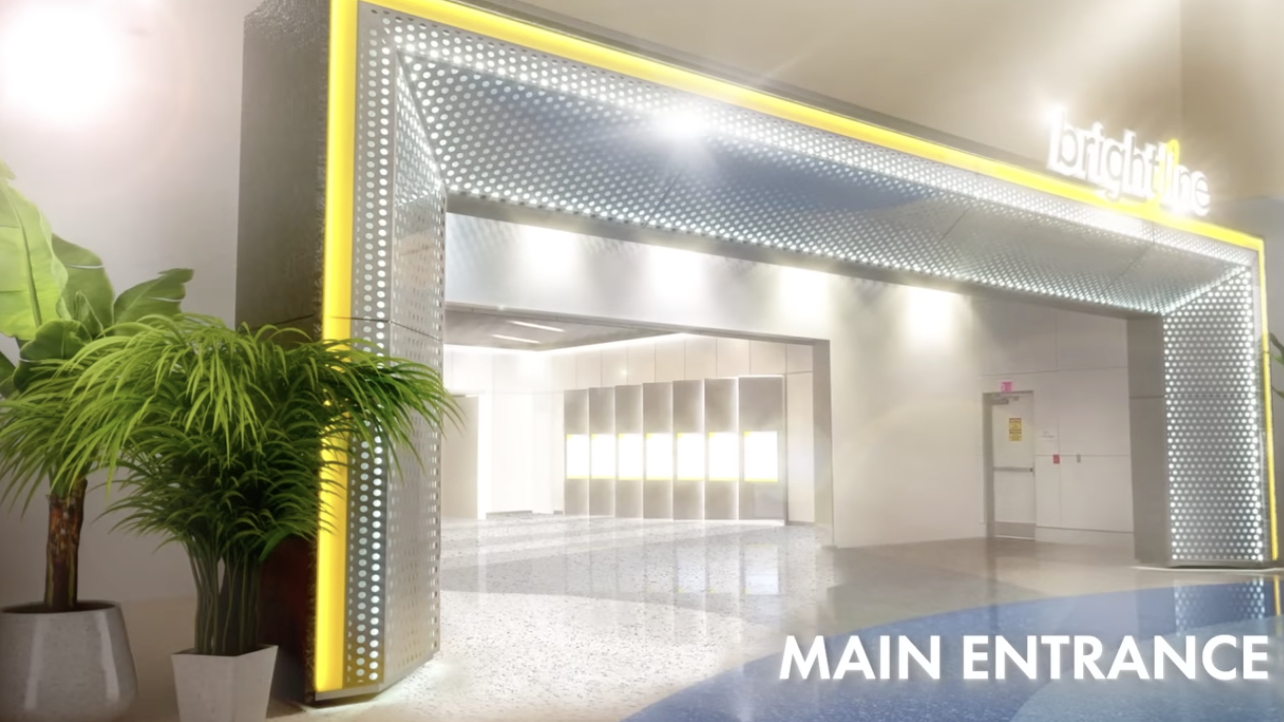 Brightline on Jan. 9 released a video (watch below) and renderings of its future Orlando Station, which is expected to open this year and will “connect millions and regionalize the state.”

Spanning three stories, the 37,350-foot station features “groundbreaking design and a unique synthesis of luxury amenities that meet the demand of today’s modern traveler,” Brightline stated in a release.

The guest journey, Brightline says, begins at the main entrance, located off the airport’s expansive two-story glass atrium. Once inside the station, passengers can purchase tickets from guest services or one of several self-service kiosks, and check luggage before proceeding through touchless turnstiles into the security screening area. Brightline is currently the only rail system in America that screens all passengers and bags prior to boarding.

“This world class train station continues our mission of transforming train travel in America,” said Brightline President Patrick Goddard. “We have carefully thought through each detail of this station to ensure that it exceeds the expectations of the modern traveler.”

The station, which is in the heart of Orlando International Airport’s new 80,000-square-foot Terminal C, “takes the luxury amenities Brightline is known for to new heights” featuring an upscale retail experience with convenient in-station shopping and its Mary Mary Bar, serving hand-crafted cocktails and lite bites. The signature sit-down bar is positioned at the far end of the station with a stunning panoramic view overlooking the train platform where guests can leisurely watch as trains arrive and depart the platform. Designed by Miami-based Bigtime Design Studios, alongside architect of record Sonny Fornoles of Borrelli + Partner, the station connects directly to the airport’s parking deck C, which will have more than 350 parking spaces reserved for Brightline guests. An automated people mover (APM) connects the terminal to the rest of the airport facilities, including Terminal A and B in under five minutes.

Located above the Mary Mary bar is an iconic, flip-flap message board that can rotate alphanumeric text and/or graphics to form a message. A nostalgic nod to historic train stations, the flip-flap will provide updated train schedules, boarding times, news of the day and other announcements complete with the flip-flap sound “reminiscent of the first passenger train stations in America,” Brightline said.

Passengers will access trains by escalator or elevators to the first level platform and board from one of two new track platforms. These platforms are 1,000 feet long and will accommodate a train with four coaches and two locomotives that will transport guests on the Orlando to Miami route in just over three hours.

Brightline offers two classes of service, SMART and PREMIUM. Brightline’s PREMIUM service will provide complimentary drinks and snacks in a dedicated lounge and train coach. Throughout the station, all guests will have access to free high-speed Wi-Fi, charging stations at every seat, 87 big screen televisions and a children’s play area located in the SMART lounge.

On Jan. 5, city leaders from Appleton, Green Bay, Kaukauna, Menasha, Neenah, Fond du Lac and Oshkosh announced they submitted a letter of interest to the FRA to take part in a study that would look at building an Amtrak rail line connecting Green Bay and Milwaukee, according to a Local Five News report.

According to the report, the study for the potential rail line, which would include stops in Appleton, Fond du Lac and Oshkosh, is part of the FRA’s Corridor Identification (Corridor ID) Program, part of President Biden’s infrastructure law, which sets aside $1.8 billion for the program. “Communities all across the country have also expressed interest in the program and FRA officials must choose which communities will ultimately get the rail line,” according to the report.

According to the report, the FRA “will use several pieces of criteria to determine which communities are best suited for a new Amtrak line, such as ridership, capital requirements, trip times, anticipated public benefits (an important addition to the calculus), the level of readiness of the operators and the community to accept Federal funds and existing support from operators and host railroads.”

In conjunction with the FRA, Local Five News reports, selected communities will develop a plan for what Amtrak service would look like in their community. The FRA would provide federal monetary assistance for the projects. According to the report, mayors Local Five News spoke with said, “it’s too early in the process to know how much local municipalities would have to provide monetarily for railroad development.”

According to the report, an Amtrak official told Local Five News that “there haven’t been passenger trains in Northeast Wisconsin since the 1970s.” However, he said “an Amtrak line that connects Milwaukee and Chicago is one of the region’s most popular routes, averaging just under 900,000 passengers per day prior to the pandemic.” Both Appleton Mayor Jake Woodford and Green Bay Mayor Eric Genrich said, “this makes extending the lineup to Green Bay make a lot of sense.”

“Every reason that somebody would be driving on I-43 or I-41 or I-94 is a reason they could be riding an Amtrak train,” said Amtrak spokesman Marc Magliari. “It could be to visit family and friends; it could be to do business.”

According to the report, both Woodford and Genrich say “it’s too early in the process to know how a railroad project [will] get funded if Northeast Wisconsin ultimately gets selected as one of the communities that will get a new Amtrak line.”

The passenger rail station project kicked off on Oct. 22 with a groundbreaking ceremony, which was attended by Pennsylvania Gov. Tom Wolf, as well as project leader PennDOT, and Coatesville and other local officials.

According to the Daily Local News report, work includes the design, station and streetscape construction, Amtrak support, and Amtrak track work at Fleetwood Street, just east of the existing historic station building, which is owned by Amtrak and leased to the City of Coatsville.

Foundation work for the south platform area is currently under construction and foundation work will continue through early spring 2023, according to a recently issued PennDOT release, the Daily Local News reported. For the next phase, construction of platforms and elevators and stair towers on the south side will then commence.

The original site, according to the report, has been closed for more than 25 years and sits on a curve of the track that provides construction of ADA-accessible platforms and necessitated a shift in the station location.

According to the report, the new, accessible station along Fleetwood Street between Third and Fourth avenues will feature 530-foot-long high-level accessible platforms with canopies and seating; stair/elevator towers; an audio/visual public address system and security cameras; and bicycle racks. Also included are expanded surface parking and accommodation for multimodal connections.

According to the report, Fleetwood Street will be reconfigured to improve access to the new station and to include bus stop and “kiss-and-ride” areas. The layout will include a plaza and space for commercial and retail development on the south side of Fleetwood Street opposite the new station location, on property owned by the Coatesville Redevelopment Authority (RDA), which, along with Chester County, is supporting the PennDOT-led work.

The RDA, Daily Local News reports, is seeking developers for “opportunity sites” of approximately .5 acres each, which will flank a two-story parking garage.

According to the report, public engagement included presentations to City Council and use of a 3D model of the proposed station to “help convey the design to residents and others interested in the project.” Prior to the streetscape projects, the report states, “community members were offered a tour of recently constructed improvements in a neighboring municipality that similarly were intended to increase walkability and connectivity to a passenger rail station.” Station design was completed in mid-2021.

Additional funding for the project is being provided by the Federal Transit Administration (FTA). Through the partnership with PennDOT, Chester County and the RDA, contractor Wickersham is hiring local workers and Michael Baker is the project manager, led by Patrick Gardner.

SFMTA on Jan. 7 held a ribbon cutting ceremony for the Central Subway project, including the T-Third route, which is now open for full service, the agency announced via a Twitter post.

According to SFMTA, the new T Third route provides service from Chinatown-Rose Park to Sunnydale via the Central Subway. The T Third will continue north at 4th and King streets and connect to the new Central Subway stations instead of turning onto King Street and running along the Embarcadero and the Market Street subway.

“Today I was proud to participate in the ribbon cutting ceremony for the Central Subway project—a new subway line connecting families to a booming corridor, taking another step toward a transit-first San Francisco and supporting economic growth and cultural vibrancy,” said House Speaker Nancy Pelosi in a Twitter post.

“Thank you Nancy Pelosi for your unwavering support for a transportation system San Franciscans deserve,” said SFMTA. “Today wouldn’t be possible without you!”