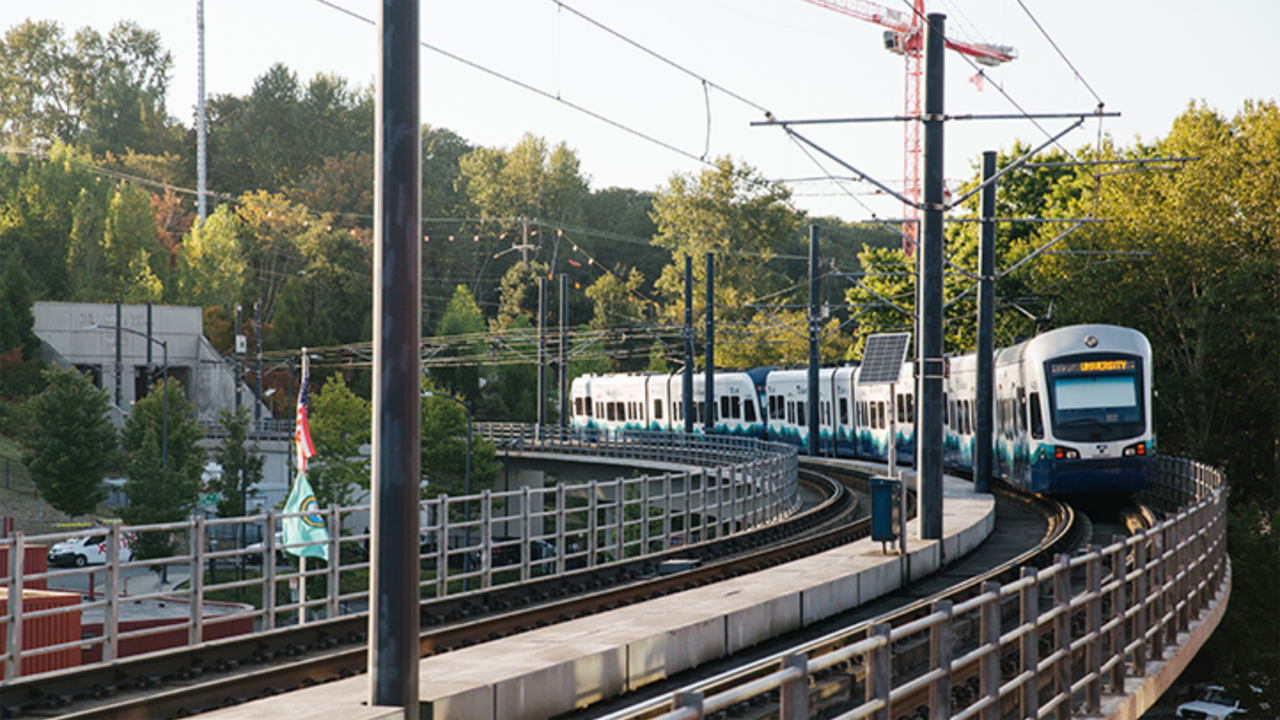 The Clipper BayPass will provide approximately 50,000 Bay Area residents free access to all rail, bus and ferry services in the nine-county region.

The Metropolitan Transportation Commission (MTC), in partnership with BART and all other agencies participating in the Clipper fare payment system, launched on Aug. 15 the Clipper BayPass, a two-year pilot program to study the impact of a single pass.

The Clipper BayPass will initially be distributed to participating students at San Francisco State University, San Jose State University, the University of California’s Berkeley campus and Santa Rosa Junior College, and then expanded to include residents of select affordable housing communities managed by MidPen Housing. While the Clipper BayPass will be made available to all students at Santa Rosa Junior College, BART says, about a quarter of students at the other campuses will be invited to participate in the pilot. Other students will use another form of payment (such as a standard adult Clipper card; U.C. Berkeley’s EasyPass for travel on AC Transit buses; or San Francisco State’s Gator Pass for free travel on Muni and SamTrans and reduced fares on BART). This limited distribution, which will be based on random assignment, is designed to measure the impact on travel of an all-system pass when compared to students not using Clipper BayPass, BART says. All residents at participating MidPen Housing properties will be offered a Clipper BayPass.

According to BART, Clipper BayPass is the first initiative to be implemented based on recommendations of the Coordination/Integration Study and Business Case, an 18-month study led by MTC and BART that “focused on creating more customer-friendly transit fare system in the Bay Area” and was conducted in partnership with all other Bay Area transit agencies.

“One of the big takeaways from the Blue Ribbon Transit Recovery Task Force convened early in the Covid-19 pandemic is the urgency of making Bay Area transit simpler and more seamless,” explained MTC Chair and Napa County Supervisor Alfredo Pedroza. “Clipper BayPass is a great way to get real-world data on the role fare coordination can play in meeting those goals. We’ll use the information collected to help shape the development, pricing and implementation of one or more new multi-agency passes or fare caps that eventually will be used by vastly more riders.”

BART says MTC will provide funds to transit agencies to offset the revenue impacts of the Clipper BayPass pilot, which is expected to conclude at the end of 2024.

Participants in the BayPass program will continue to use their Clipper cards— either traditional plastic cards or Clipper cards on their smartphones or Apple Watch—to tag on (or off) at faregates, on buses, on rail platforms or at ferry ramps. Aside from traveling at no charge, the Clipper BayPass, BART says, will function like any other Clipper card. The Clipper BayPass may not be shared with family or friends; it may be used only by participants selected for the pilot program, and any violators will be removed from the program.

“This pilot program is an exciting step toward fare coordination among transit agencies and toward making it easy for organizations to prioritize and promote transit as the preferred mode of transportation in the Bay Area,” said BART Board President Rebecca Saltzman. “Studying a regional fare pass using students and residents of affordable housing communities makes clear our commitment to building a more equitable fare system.”

Last month Metrolinx’s Mount Pleasant Station–and the Eglington Crosstown LRT project as a whole–reached a milestone with the completion of the heritage façade, the exterior of a classic Imperial Bank building located in Tortonto.

According to Metrolinx, the face of the building, known as the heritage façade, is an important part of the structure’s architecture and plays a big role in conserving the city’s history, so Metrolinx ensured it remained throughout construction.

To prepare for construction, crews took the building down in 2016, carefully labeling, cataloging and storing the façade’s bricks in an off-site facility. Once the main entrance to Mount Pleasant Station was built, crews used those same bricks to construct the façade.

According to Metrolinx, the next steps for this station include continued testing and commissioning of station equipment, as well as road restoration and landscaping work.

The Federal Transit Administration (FTA) and the CTA, in cooperation with the Federal Highway Administration (FHWA), announced on Aug. 15 the publication of the combined Final Environmental Impact Statement (EIS)/Record of Decision (ROD) and Final Section 4(f) Evaluation for the RLE Project on Aug. 12. This, CTA says, is a significant milestone that paves the way for the Authority to advance to the next steps of the federal New Starts funding program.

The ROD, CTA adds, is the conclusion of the National Environmental Policy Act (NEPA) EIS process and is the official FTA decision document regarding the project’s environmental impacts and mitigation. The ROD and the Final EIS, which are combined into a single document, include a list of mitigation commitments related to the impacts identified in the Final EIS.

The RLE project, which, according to CTA, “will be one of the most critical and transformative investments for Chicago’s Far South Side communities and benefit the entire City of Chicago” will extend the Red Line–Chicago’s most traveled line–by 5.6 miles from the existing terminal at 95th Street to 130th Street and include four new stations near 103rd Street, 111th Street, Michigan Avenue and 130th Street. The project’s modern, efficient railcar storage yard and maintenance facility would benefit the entire Red Line, CTA adds.

“I am thrilled to see the Red Line Extension project move one step closer to becoming a reality,” said Chicago Mayor Lori E. Lightfoot. “This transformative project will improve the lives of South Side residents and their communities who will be able to access all that our city has to offer with ease. My administration is committed to investing in economic vibrancy and opportunity through projects like this throughout our city, but especially on our South and West Sides.”

Public and agency engagement and feedback have been vital to the development and refinement of the RLE Project since the publication of the Draft EIS in 2016 and the Supplemental EA in January 2022, CTA says. Community input has been and will remain essential in helping shape this project and its path forward, the Authority adds.

An electronic copy of the combined Final EIS/ROD and Section 4(f) Evaluation can be found below.

According to a Twitter post on Aug. 15, Brightline will now be offering later trains to “keep the party going.” When reserving late night rides, customers should look for the Midnight Train icon (as seen on the image below).

CATS is planning a multi-million-dollar light rail station in Charlotte’s South End between New Bern and East/West Stations to “stop people from dangerously cutting across the tracks,” Axios Charlotte reported on Aug. 15.

According to the Axios Charlotte report, CATS leaders have pointed out that there is no crossing in the span between Publix and Sycamore Brewing for seven blocks, while other South End stops are just one or two blocks apart. The extra stop, CATS says, will slow down a one-way trip on the train, from I-485 Station to Uptown, by approximately 90 seconds or less.

According to CATS, engineers are recommending a single crossing between two offset platforms and accompanying rail trail segments. The two platforms won’t be directly across from each other. Instead, one platform is planned in front of Publix and the other is offset farther north, in front of Sycamore, connecting to a sidewalk on Hawkins Street, Axios Charlotte reported.

CATS, which says it is in the early stages of planning the new station and crossing, has a $1.9 million contract with Kimley-Horn & Associates for the planning and design but does not yet have an estimated full price for the project, adding that that will come with the next phase, according to the Axios Charlotte report.

Environmental studies will continue in the fall, CATS says, a step needed to use federal funding. According to CATS, and as reported by Axios Charlotte, designs will take approximate 1.5 years with construction expected to start by late 2024.

Working around the operating Blue Line and minimizing disruptions to nearby businesses will prolong the project, CATS says, but the station is expected to open by the end of 2026.

Caltrain announced on Aug. 15 that its first electric trainset has undergone further clearance testing from San Jose Diridon Station to San Francisco Station to “ensure that the trains and tracks meet all clearance requirements for the electric trains to operate safely along the Corridor.”

The train was outfitted with foam rubber padding to simulate the maximum clearance area as it traveled 5 mph, pulled by a diesel locomotive. According to Caltrain, no major problems arose over the course of the second test, and no further clearance testing is planned until the overhead catenary system (OCS) is fully installed. The next major test for the new electric trains, Caltrain says, should take place later this year, when the trains will operate under its own power via the OCS.

Caltrain reported on July 18 that the first EMU was tested July 16-17 between the Santa Clara and Tamien (San Jose) stations, along its 51-mile commuter rail corridor (see map below).

The electric trainsets, which Caltrain says will offer a better service to riders, will each have seven cars, as opposed to the current five to six. These vehicles accelerate and decelerate faster than diesel trains, as the power is distributed throughout the train, while older cars must be pulled by a locomotive. These electric trains also generate much less noise than their diesel equivalent, making the trip more enjoyable for both riders and residents that live near Caltrain tracks, the transit line says. According to Caltrain, the new trains also offer enhanced amenities, including new digital onboard displays, power outlets at each forward-facing seat, a new seat color palette selected by the public, energy-efficient lighting, coat hooks, security cameras, and expanded storage under the cantilevered seats.

The City of Ottawa presented on Aug. 15 its closing statement in the Ottawa LRT Public Inquiry, outlining the City’s “strong desire to hold to account the private contractors responsible for the historic and ongoing failures in the design, construction and maintenance of the LRT.”

In its statement, prepared by the City’s counsel for the Inquiry, Singleton Urquhart Reynolds Vogel LLP, the City focused on the Commission’s core mandate, which is to identify the circumstances and contributing factors that led to several problems with the Stage 1 LRT, including several breakdowns and derailments.

In June 2022, Railway Age reported that the Ottawa LRT Public Inquiry was looking into the commercial and technical circumstances that led to breakdowns and two derailments in summer/fall 2021 on Stage 1, the Confederation Line, of the Ottawa LRT project.

“Ottawa residents are rightfully frustrated that the LRT has not always lived up to expectations,” the City said in a release. “Although the project was completed on budget, unlike many similar projects, taxpayers have continued to bear the burden of private sector failures in the operations of the Confederation Line. It is the City’s strong desire to ensure RTG and its subcontractors are held accountable for the multiple failures in design, construction and maintenance.”

In closing, the City of Ottawa’s submission consists of several recommendations, including:

Ottawa says it “looks forward” to the Commission’s Final Report, and hopes that the recommendations will enable the City, its public and private sector partners to deliver better transit for the people of Ottawa, while holding the companies who broke their contractual obligations to account.

On Aug. 11, Railway Age reported that Ottawa LRT received an extension to file its report to Ontario Minister of Transportation Caroline Mulroney and will now be filing by Nov. 30, one month after the municipal election.