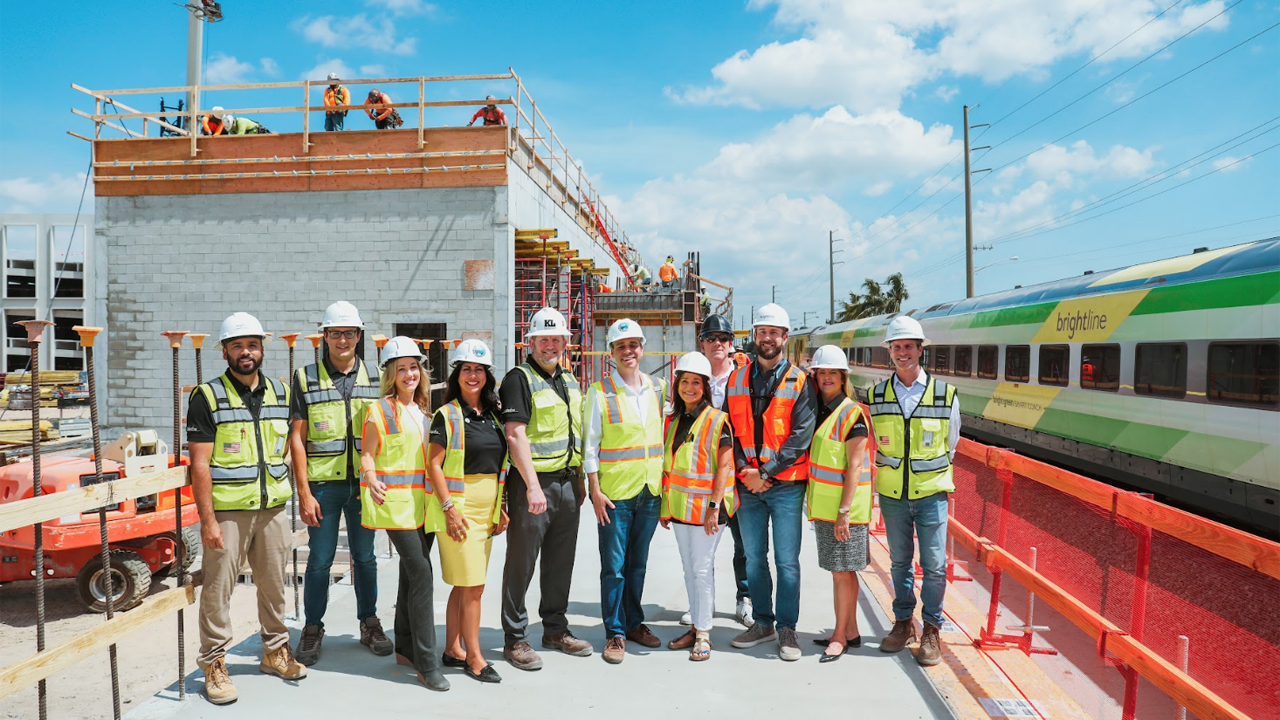 San Francisco Bay Area Rapid Transit (BART) shares how it uses earthquake early warning technology. Also, work progresses on Brightline’s Boca Raton, Fla., station, the fourth in the state for the private-sector passenger railroad; elementary and high school students in the Chicago area can ride Metra commuter rail and Pace buses for free on Aug. 22; and Metro Transit in St. Louis, Mo., is reporting that it will be “several months” before light rail service is fully restored due to flash flooding damage last month.

When an earthquake strikes, every second counts. That’s why BART says it developed technology that leverages the U.S. Geological Survey-managed ShakeAlert Earthquake Early Warning (EEW) System, which was built through partnerships with the California Governor’s Office of Emergency Services (Cal OES), U.S. Geological Survey (USGS), and Berkeley Seismology Lab. The EEW system “sends an alert to BART servers warning the system of an impending quake, giving patrons and staff crucial seconds to ‘Drop, Cover, and Hold On’ before shaking starts,” according to an Aug. 16 transit agency report.

“The EEW system can give us that precious few seconds to reduce the possibility of derailment by holding the train or reducing the train speed and moving the train to a safer location,” says Phoebe Cheng, Group Manager of Civil, Structural, Track Engineering, and Construction Engineering at BART.

BART began developing and testing EEW technology in 2012 and joined the ShakeAlert pilot program in 2016. In 2020, it became a Licensed Operator (LtO) of the technology. Now BART says it is “actively working with other agencies and organizations to help implement and improve the system,” including Southern California’s MetroLink, the Oregon Department of Transportation, Port of Seattle, British Columbia, and the San Francisco International Airport. (MetroLink is currently testing the EEW system.)

Here’s how the EEW system works: “Ground motion sensors placed throughout the state detect earthquakes before shaking reaches humans,” BART explains. “There are two kinds of waves during an earthquake: P-wave and S-wave [see graphic above]. P-wave rarely causes damage and travels faster than S-wave. The sensors detect the P-wave and transmit the data to the earthquake alert center, which determines the location and magnitude of the earthquake. The difference in timing between the two waves allows the sensors to estimate how much time each location in California will have before they feel the damaging S-waves.”

Once the EEW system notifies the BART server of the an impending earthquake, the server “calculates the earthquake’s seismic intensity within nanoseconds, and if the seismic intensity—or MMI (Modified Mercalli Intensity Scale)—is greater than IV, the server will automatically signal trains to reduce speeds,” BART reports. “Upon notification, BART trains are held for at least five minutes before entering ‘manual mode’ and slowing down to about 27 mph. (Trains typically operate under Automatic Train Operations at speeds of up to 70 mph.) If the earthquake magnitude, Mw, is low, BART trains quickly return to regular speeds before the five-minute period is over. If the earthquake magnitude is high, train operators will either hold the train in place until authorized to proceed or will navigate the trains to the next closest station at a slow speed. Track inspections are conducted in all areas to check for damage to trackway and supporting structures. Once given the all clear, BART’s Operations Control Center will instruct trains return to normal operation.”

BART’s EEW system is tested on a quarterly basis, according to Cheng. During testing drills, which occur during revenue service, a BART server creates a “scenario earthquake” that triggers the EEW system and signals trains to automatically decelerate.

For more on the BART system, visit the agency’s website.

Brightline and contractor Kaufman Lynn on Aug. 16 hosted a “topping off” ceremony for the passenger rail system’s Boca Raton station and parking garage, signifying completion of structural work. Interior work is next.

Brightline broke ground on its $56.2 million Boca Raton station project on Jan. 25, 2022. Located on a 1.8-acre site across from Mizner Park and adjacent to the downtown library, Brightline’s Boca station will feature 22,000 square feet of space plus a 455-space parking garage that will serve Brightline riders and library patrons, who will have dedicated, covered and complimentary spaces on the first floor.

Brightline reported in January that a $16.4 million Consolidated Rail Infrastructure and Safety Improvements (CRISI) program grant, awarded by the Federal Railroad Administration in 2021, will help cover the station, garage and associated rail infrastructure costs. Additionally, a $9.9 million commitment from the city of Boca Raton will be used for the parking garage. Brightline said it would fund the balance of the project, approximately $30 million.

Slated to open before the end of the year, the station in Boca Raton will be the private-sector passenger rail operator’s fourth in the state, connecting riders to Miami, Fort Lauderdale and West Palm Beach. Brightline said its fifth expansion station in Aventura will also open this year.

“Our construction teams are working across South Florida and throughout the state to connect Florida like never before and we can’t wait to connect to Boca,” Brightline President Patrick Goddard said during the ceremony, which was also attended by Boca Raton Mayor Scott Singer, Kaufman Lynn Construction Senior Vice President Garrett Southern, and city council members.

In related news, Bloomberg on Aug. 8 reported that Brightline will sell up to $1 billion of tax-free debt to finance its $2.7 billion, 170-mile extension north to Orlando (see map above), which is expected to open for service early next year.

Metra and Pace will for the first time join Chicago Transit Authority in allowing K-12 public and private school students, as well as an accompanying adult, to ride trains and buses for free on the first day of school, Aug. 22.

“We are pleased to be able to help families start the academic year on a positive note by offering free rides for students using Metra to get to their schools,” Metra CEO/Executive Director Jim Derwinski said during the Aug. 16 announcement. “It’s just one more way we can be My Metra for all our riders.”

“Pace serves many city and suburban schools with our fixed route and ADA services,” Pace Executive Director Melinda Metzger said. “We welcome students and hope these free rides help them start the school year off strong.”

On other days, students enrolled in grade school or high school can purchase a reduced Metra One-Way, 10-Ride or Monthly Pass, according to the commuter railroad; student fares are in effect at all times. Students can also get discounted rides by buying the Pace 30-Day Reduced Fare Pass for $30 (unlimited rides all day, every day, regardless of trip purpose and without school-hour restrictions, for 30 days); paying with transit value on their Student Ventra Card for a reduced fare of $1.00, with transfers costing $0.20, paying $1.10 in cash (using exact change) after presenting a student ID; or paying a surcharge of $1.15 using Ventra transit value when using the 30-Day Reduced Fare Pass on Pace Premium routes.

Since July 26, when the St. Louis, Mo., region experienced record rainfall of 9.04 inches in 24 hours, Bi-State Development’s Metro Transit “has been working around the clock to restore service,” the agency reported Aug. 16 on its website. Here is its latest service update:

“The majority of the damage is concentrated on a two-mile stretch of the MetroLink [light rail] system from the Forest Park-DeBaliviere Station to the Delmar Loop Station. Damage is estimated to be in the millions of dollars.”

“Our crews were able to make track bed repairs in the first 72 hours, so we could cancel the Red Line bus shuttles and reopen train service on the Red Line. After other repairs were completed, we were able to resume Red Line service from St. Louis Lambert International Airport to the Shiloh-Scott Station.

“We are still experiencing delays because we cannot operate trains at normal speeds through the flood-damaged area due to the significant damage to the signal houses and communications equipment.

“Because the Red Line and Blue Line meet at the Forest Park-DeBaliviere Station, the DeBaliviere signal house plays a critical role in maintaining safe operations at that intersection. Since the DeBaliviere signal house is a total loss and the signal and communications systems still down, we are currently unable to move the Blue Line and Red Line trains through the Forest Park-DeBaliviere Station. That is why [riders] have to catch a MetroLink Station Shuttle to transfer between the two lines. We are devoting a lot of time and attention to clean and assess each piece of those highly sensitive and intricate electrical systems that was underwater to see what can be repaired and what components must be replaced with new equipment. It will be several months before we can fully restore MetroLink service on the Red and Blue Lines in the City of St. Louis City and in St. Louis County.

“In the meantime, our main goal is to make it easier as soon as possible for [riders] to transfer between the Blue Line and Red Line by train again at the Forest Park-DeBaliviere Station. We are working on a plan that will provide [riders] that option in the coming days so please stay tuned. Thank you for your patience and understanding as we navigate this unprecedented challenge.”