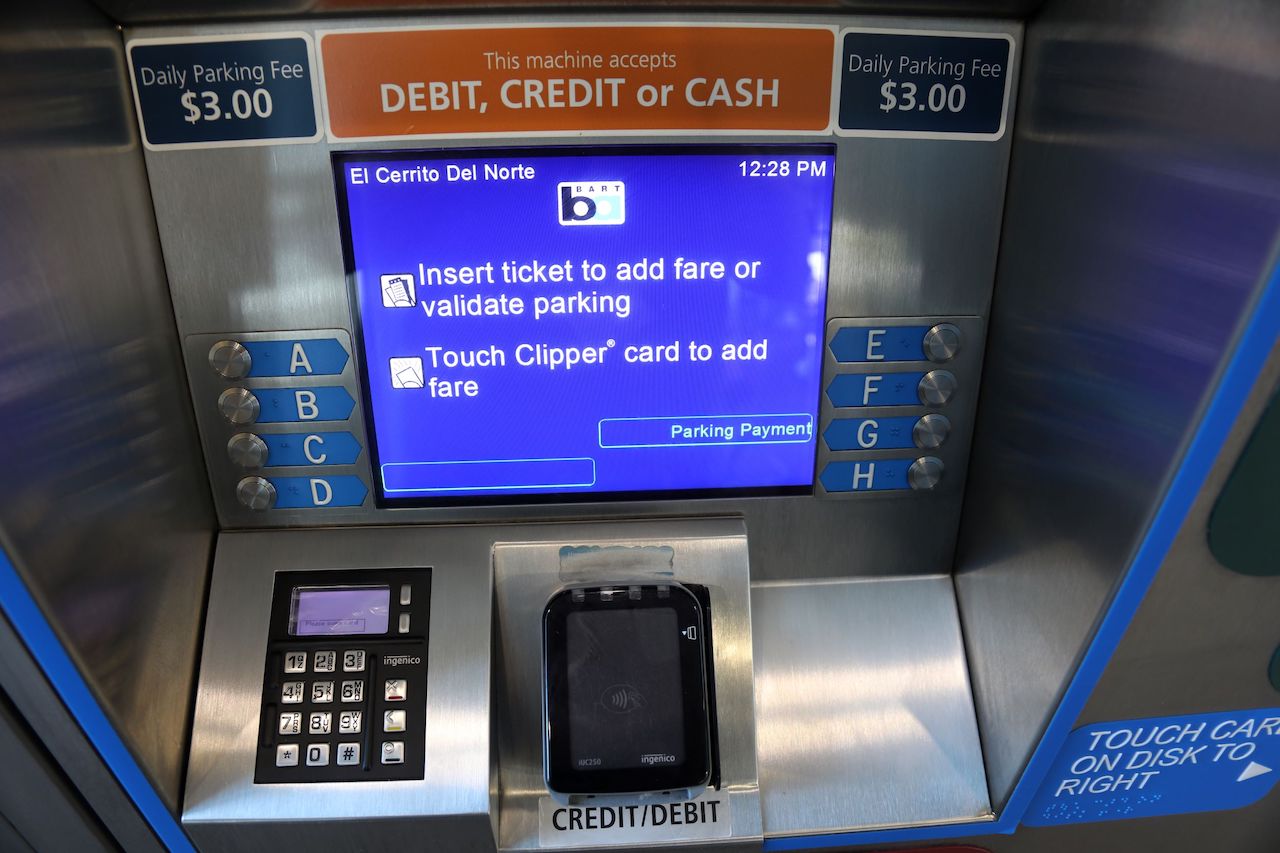 BART crews have made several upgrades to the agency’s fare collection machines to “speed up the experience,” including the use of credit and debit cards at the agency’s Add Fare Machines inside stations, which also serve as parking payment machines.

This upgrade, BART says, is perhaps the biggest customer experience improvement to date for those who drive and park at BART stations. BART also offers the official BART app as an easy method for paying for all types of parking at BART with a credit/debit card, Venmo or PayPal. Previously these machines only accepted cash.

This upgrade, BART adds, is also an improvement for all riders who must add funds to exit. In 2019, BART began rolling out “Add Value” machines in the paid area that accepted credit and debit cards for adding any arbitrary amount of funds to Clipper cards. However, these machines didn’t accept parking payments and the “Add Fare” machines were still in place—”causing confusion” about which machines accepted credit/debit cards and which ones were cash only.

“It was not uncommon for a rider needing to exit a station to end up with a pocket full of quarters because the ‘Add Fare’ machines only accepted cash for the small amount needed to exit,” BART says. Now Add Fare machines allow riders to decide to either add the amount needed to exit or however much money they would like.

Upgrading all fare machines to accept EMV chip cards or mobile devices will be the next step in modernizing this equipment, BART says. Riders will likely see a note stating the machines are “swipe only” until the EMV technology is configured.

According to a Miami Today report, the Florida Department of Transportation (FDOT) District Six has resumed talks with Amtrak to bring trains into the Miami Intermodal Center (MIC), east of Miami International Airport.

According to the Miami Today report, Amtrak Model Development Office Administrator Nilia Cartaya told the Sept. 22 Citizen’s Independent Trust Board meeting that “both parties are currently negotiating the lease and an acceptable clause.”

Separately, Amtrak “would have to negotiate an agreement with Miami International Airport and the South Florida Regional Transportation Authority (SFRTA) on their contribution to the maintenance of common areas, platforms, track and overhead canopy,” Miami Today reported.

SFRTA Director of Public Affairs Victor Garcia confirmed to Miami Today that “they requested a copy of our agreement with FDOT on the common area maintenance, as they will have to work this out with them and the site project managers.”

According to the Miami Today report, the publicly funded MIC opened in 2015. Amtrak trains initially couldn’t enter the station as they were too long and disrupted traffic at the east side of the station at Northwest 25th Street.

Still, Miami Today reports, “Amtrak has not occupied the station as the company and the state did not reach an agreement over lease terms. Now, as officials are back at the negotiating table with the company, officials said they hope to bring the trains to the station soon.”

According to the Miami Today report, in February, Amtrak completed tests at the MIC in which its longest train entered the station without disrupting traffic. “We saw the rail equipment operate perfectly; the gates went down as expected, so everything went very smooth for this testing,” Cartaya told the CITT meeting. Garcia also confirmed to Miami Today that SFRTA worked with Amtrak on this testing.

In addition, in July, Amtrak Real Estate and IT teams visited the MIC to “further assess the facility and the leadership and IT teams continued visiting the site through August, a presentation of the department details,” according to the Miami Today report.

“They seem very eager. They’re constantly in communication with the department, so I think that that’s a positive sign,” Cartaya said when asked about the tone of the conversations with Amtrak, according to the Miami Today report.

FDOT Deputy Right of Way Manager-Operations Maria Llanes said the intention of Amtrak was to “discontinue its Hialeah service once it can bring its trains into the MIC station,” according to Miami Today, which could not independently confirm this by deadline.

According to the Miami Today report, in March, Executive Director of the Trust Javier Betancourt, wrote Amtrak “urging it to extend its Silver Meteor/Silver Star Intercity Passenger Rail Service to the intermodal center.”

“If there is anything the CITT can do to assist in the realization of this long delayed Intercity Passenger Rail Service to the MIC terminal, we would be happy to consider it,” Betancourt wrote. “This would be a win-win-win for Amtrak, the citizens of Miami-Dade County, and our traveling visitors. We respectfully and eagerly request that you please make this happen.”

In response, Amtrak President and CEO Stephen Gardner wrote back in April that the company was “highly interested in moving our Miami operations to the facility.”

According to the Miami Today report, Gardner wrote that “the company was evaluating technical and operational aspects of moving its service to the MIC, and that the real estate group was working to reaching mutually acceptable commercial terms for a long-term facility lease at the MIC.”

SEPTA on Sept. 28 gathered with elected officials and other stakeholders at Tasker-Morris Station to break ground for a new project that will make the South Philadelphia Broad Street Line station “fully accessible and deliver modern amenities for riders.”

A key element of the $19 million project, SEPTA says, will be providing elevator access from street level to the mezzanine level and a second elevator to the platform below, making the station fully compliant with the Americans with Disabilities Act (ADA).

“Thanks to funding from the Commonwealth and the City of Philadelphia, we are making investments that will improve mobility and enhance access, and support the communities we serve,” said SEPTA General Manager and CEO Leslie S. Richards. “This project is helping to revitalize a critical station, and we look forward to delivering more improvements on the line in the near future.”

In addition to the new elevators, other planned improvements to the station include:

By the time the project is completed in early 2024, 13 of the 22 Broad Street Line stations will be fully ADA accessible, SEPTA says.

Tasker-Morris serves approximately 3,000 riders each weekday. The station will remain open during construction.

“I want to thank SEPTA for making this $19 million investment to improve SEPTA’S Tasker-Morris Station on the important Broad Street Line,” said Philadelphia City Councilmember Kenyatta Johnson (Second District), Chairperson of City Council’s Transportation Committee. “SEPTA will continue to make important improvements and upgrades on all modes of transportation and infrastructure throughout the SEPTA system in the five-county Philadelphia area. I am looking forward to seeing additional SEPTA improvements throughout the Second Council District and the Delaware Valley to enhance the public transit travel experience in the years to come.”

As part of the Trial Running testing phase of the “first fully automated rail system in North America,” HART and Hitachi Rail are running small-scale exercise drills in partnership with the City’s First Responders at the Hālawa Rail Station (Aloha Stadium Station).

The exercises, HART says, allow rail personnel to practice hypothetical emergency scenarios in preparation of future rail service. There will be personnel on the trains and at the station for these exercises, but these events are closed to the public and the media for safety. Entry is limited to registered city personnel and Hitachi employees only.

HART announced on Aug. 30 that the Trial Running testing phase—the final series of testing before operation—began on Aug. 29.

There will be additional exercise drills throughout Trial Running, including a Full-Scale Exercise in October, HART adds.

According to MTC, the Transit-Oriented Communities Policy links all four of the themes—transportation, housing, the economy and the environment—of Plan Bay Area 2050, the long-range transportation plan and sustainable communities’ strategy adopted by MTC and the Association of Bay Area Governments in 2021.

Minimum residential density requirements range from 25 units per acre for locations within a half-mile of ferry terminals; SMART, ACE and Capitol Corridor stations; and Caltrains stations south of San Jose’s Tamien station up to 100 units per acre within a half-mile of BART stations in downtown San Francisco and Oakland, and within a half-mile of San Jose’s Diridon Station. The policy, MTC adds, also “eliminates minimum parking requirements in many transit-rich areas, allows for shared parking between residential and commercial uses, and mandates at least one secure bike parking space for each new dwelling unit.”

“The Transit-Oriented Communities Policy is truly groundbreaking,” explained MTC Chair and Napa County Supervisor Alfredo Pedroza. “Using transportation funds as an incentive, the policy encourages cities and counties to up zone transit-rich areas so transit, walking and biking can be viable travel choices for more people, and so we can generate maximum value from the billions of taxpayer dollars that have been invested in our transit network over the years as well as new transit lines that will be built in the years to come. The policy specifically encourages the development of affordable housing and protects current residents from being displaced by new development.”

As New Jersey schools get back in full swing, NJ Transit is rolling out two initiatives as part of its ongoing Safety Education Program: Special SEAT (Safety Education Awareness Training) and Protecting our Pedestrians (POP).

Special SEAT is a six-week, 40-minute per session training, developed to educate students with special needs, specifically those with autism and speech delays. Special SEAT implements a modified version of Applied Behavior Analysis (ABA) to master awareness of transportation safety, with a specific focus on staying alert and being aware of rail and track surroundings.

The presentation also includes a discussion on the dangers of the railroad tracks, age-appropriate films, including NJ Transit’s video “Sly Fox and Birdie” created by the Operation Lifesaver (OLI) organization and a question-and-answer session.

“Special SEAT and POP are programs that are an important part of NJ Transit’s overall mission to prioritize safety, including within the communities we serve throughout the state,” said NJ Transit President & CEO Kevin S. Corbett. “These best-in-class educational programs raise transit safety awareness for K-12 students, including those with special needs.”

The presentation includes a discussion on the dangers of the railroad tracks, age-appropriate films, including NJ Transit’s award-winning film “Chicken on the Tracks” and a question-and-answer session. The 45-minute presentation is available for free to public, non-profit and charter schools and community groups.

The NJ Transit Safety Education Program also provides high school driver education. Teachers can request a program package for the classroom developed to help teen motorists safely share the road with trains, buses and light rail. The Driver Education Safety Program teaches teen motorists to use caution near the tracks and the program stresses factors that contribute to train/car collisions. The program aligns with NJ Core Curriculum Content Standards and is comprised of a PowerPoint CD, lesson plan and student reference guide.