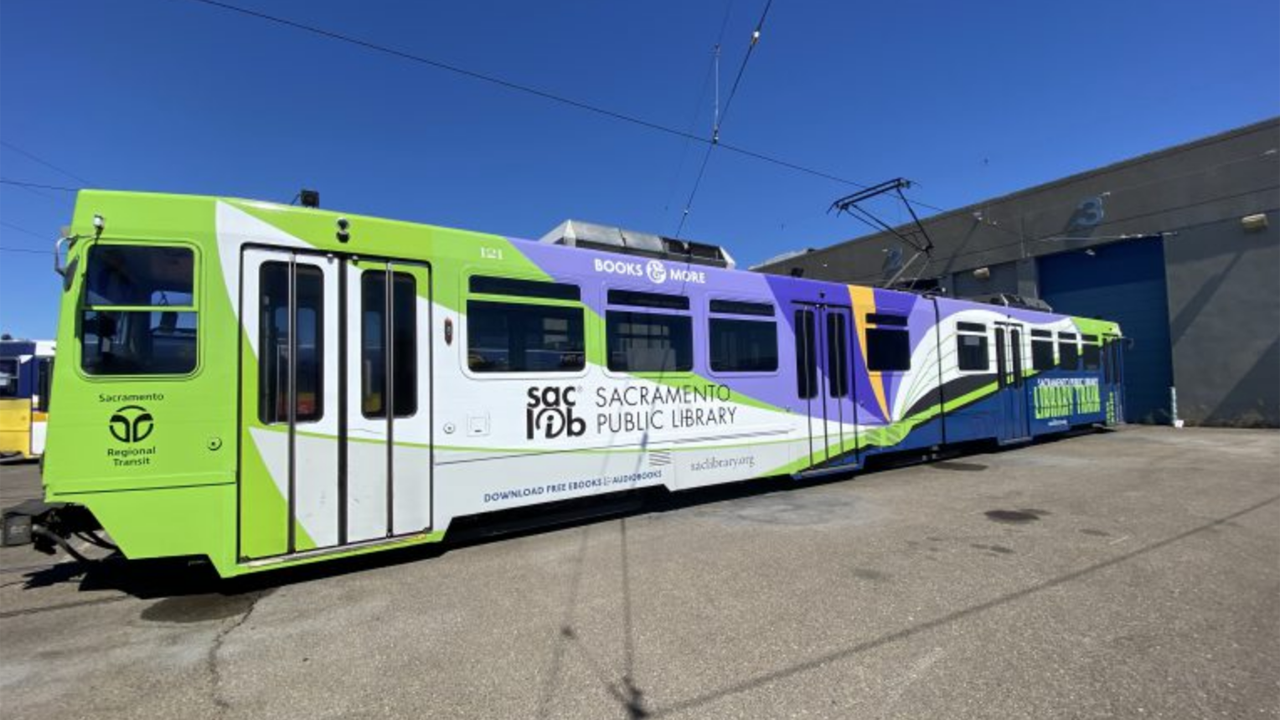 SacRT has teamed with the Sacramento Public Library to launch the area’s first library train. (Photograph Courtesy of SacRT)

The Virginia Passenger Rail Authority (VPRA) and Amtrak on Aug. 30 reported that 110,256 riders traveled on the four Commonwealth-supported routes in July—up 28.9% over the previous month and 19.8% over July 2019. VPRA launched two new round-trips in July—one to Roanoke and one to Norfolk—and resumed an additional round-trip to Newport News, which had been suspended due to the pandemic. “Every route saw an increase in ridership with Newport News topping the list,” according to VPRA and Amtrak. That route—with stops in Alexandria, Woodbridge, Quantico, Fredericksburg, Ashland, Richmond Staples Mill Station, Richmond Main Street Station, Williamsburg, and Newport News—carried an additional 10,315 riders in July compared with June, a 54% increase, they noted.

The Norfolk route—which includes stops in Alexandria, Woodbridge, Quantico, Fredericksburg, Ashland, Richmond Staples Mill Station, Petersburg, and Norfolk—saw the second-largest increase from June to July (23%) with 40,763 riders. In addition to beating June, this was a 36.5% increase over pre-pandemic July 2019’s 29,864 riders.

In July, service to Roanoke was up 72.1% from July 2021, when there were 27,374 riders. This route—which includes stops in Alexandria, Burke Centre, Manassas, Culpeper, Charlottesville, Lynchburg, and Roanoke—also beat its pre-pandemic number with a 31.4% increase in July 2022 over July 2019.

“These numbers make it very clear—Virginians want more passenger rail to be a part of their transportation network,” said DJ Stadtler, Executive Director of VPRA, which was established in 2020 to promote, sustain and expand the availability of passenger and commuter rail service in the Commonwealth.

“We are encouraged by the ridership growth and enthusiasm customers have in selecting Amtrak’s state-supported Virginia service as an option for travel,” said Ray Lang, Vice President of State Supported Services at Amtrak.

The Commonwealth of Virginia first launched state-supported passenger rail service in 2009 with one round-trip between Washington, D.C. and Lynchburg. Since that time, service has grown to include stops at 17 stations along four corridors.

The DART Board has approved an “interlocal agreement” with DCTA for a Joint Rail Operations Facility (JROF), the Cross Timbers Gazette reported Aug. 29. The facility—an expansion of DCTA’s A-train commuter rail facility in Lewisville—will be used for testing, operations and maintenance of the new Stadler FLIRT commuter railcars for DART’s 26-mile Silver Line regional rail project, according to the report. DART will fund facility construction, which is slated to start in first-quarter 2023, with DCTA providing design, construction and project management services.

“The JROF partnership between DCTA and DART furthers the region’s goals of collaboration and partnership that leverage infrastructure investments to better support regional mobility across North Texas,” DART EVP of Growth/Regional Development Deanna Leggett told the Denton County, Tex., newspaper. “We supported DCTA in launching their A-train service over 10 years ago and they are returning the favor in supporting us in implementing Silver Line service [between DFW Airport, Grapevine, Coppell, Dallas, Carrollton, Addison, Richardson, and Plano]. Our hope is that this partnership advances to include track upgrades that allow DCTA to connect in with our Silver Line service in downtown Carrolton.”

Metrolinx on Aug. 25 reported that is using the Crime Prevention Through Environmental Design (CPTED) philosophy at its 18 Finch West LRT stations to ensure these public spaces are “bright, safe and inviting.”

“CPTED dictates that safety flows not only from the enforcement of laws, but from the way we design our environments,” according to Metrolinx, which is slated to compete the seven-mile (11-kilometer) LRT project in 2023 (see map below).

On Finch West LRT, both terminal underground stations and surface stops will employ glass instead of the more traditional non-transparent material options. The structures and stops on the outside of the station—as well as interior features like railings, elevators and elevator shafts—will be made almost entirely of glass, according to Metrolinx.

“Being directly involved in station and stop design, we understood the need to maximize transparency from the beginning,” said Eric Chiasson, Construction Manager with Mosaic Transit Group, which was awarded the project’s design, build, finance and maintain contract in 2018 and has been involved with implementing CPTED. “Glass was going to be instrumental in providing a safe, comfortable passenger experience.”

Meanwhile, Metrolinx and Fleets Coffee have partnered to offer riders a mobile food and beverage service at select GO Transit stations in the Greater Toronto and Hamilton Area. Earlier this month, the Burlington GO location became the first to welcome a Fleets Coffee Mobile Café. Fleets will also come to Maple GO on the Barrie Line, as well as the Unionville and Mount Joy GO stations along the Stouffville Line. Riders will be able to pre-order hot and cold beverages, treats, and breakfast and lunch items.

SacRT has teamed with the Sacramento Public Library to launch the area’s first library train, whose walls and seatbacks are printed with artwork resembling books on shelves, thanks to Lamar Transit Advertising. The “bookshelves” feature QR codes for the Sacramento Library app, which light rail riders can scan using their smartphone or other digital device and download ebooks or audiobooks for free. The library train will be traveling on both the Blue and Gold lines.

Riders in Sacramento County just need a valid library card to access the books from  the library’s digital collection using any major device, including Apple®, Android™, Chromebook™ and Kindle® (U.S. only). They can also use SacRT’s Trip Planner to find out how to get to their local library branch.

Fare ambassadors will be permanent fixtures on Sound Transit’s Link light rail and Sounder commuter rail services. The Board this month approved funding for the Fare Ambassador program and set staffing and fare inspection rates.

“This action caps more than four years of work by the agency to overhaul its fare compliance policies and practices to make them more equitable and expand access to affordable fare for low-income passengers, while maintaining important fare revenues,” Sound Transit reported Aug. 29. As part of this work, the Sound Transit Board approved reducing ORCA LIFT fares for income-eligible passengers from $1.50 and $1.00 and making fare free for young adults 18 and under. These reduced-fare programs go into effect Sept. 1. Earlier this year, the Board adopted a new fare compliance policy that includes more warnings and non-monetary ways to resolve citations, according to the agency.

Fare ambassadors—who focus on assisting and educating passengers about how to access affordable fare media—replaced fare enforcement officers on Link and Sounder in September 2021, starting a pilot program that will run through the end of this year. Community feedback prompted program development. So far, response “has been overwhelmingly positive, with people telling us they like interacting with the fare ambassadors,” Sound Transit said. “We found that fare ambassadors spend more time with passengers than the old fare enforcement officers did because they provide customer service and education about how to ride the system. This told us that we needed to add staff to meet the target 10% inspection rate adopted by the Board.”

Sound Transit reported that once it has “fully developed and implemented the internal resolution program, fare ambassadors will issue citations on a passenger’s third and subsequent interactions without proof of payment. We will notify passengers in advance of this change. In the meantime, we will continue to gather feedback from our passengers about the Fare Ambassador program and will report on its effectiveness to the Board next year.”