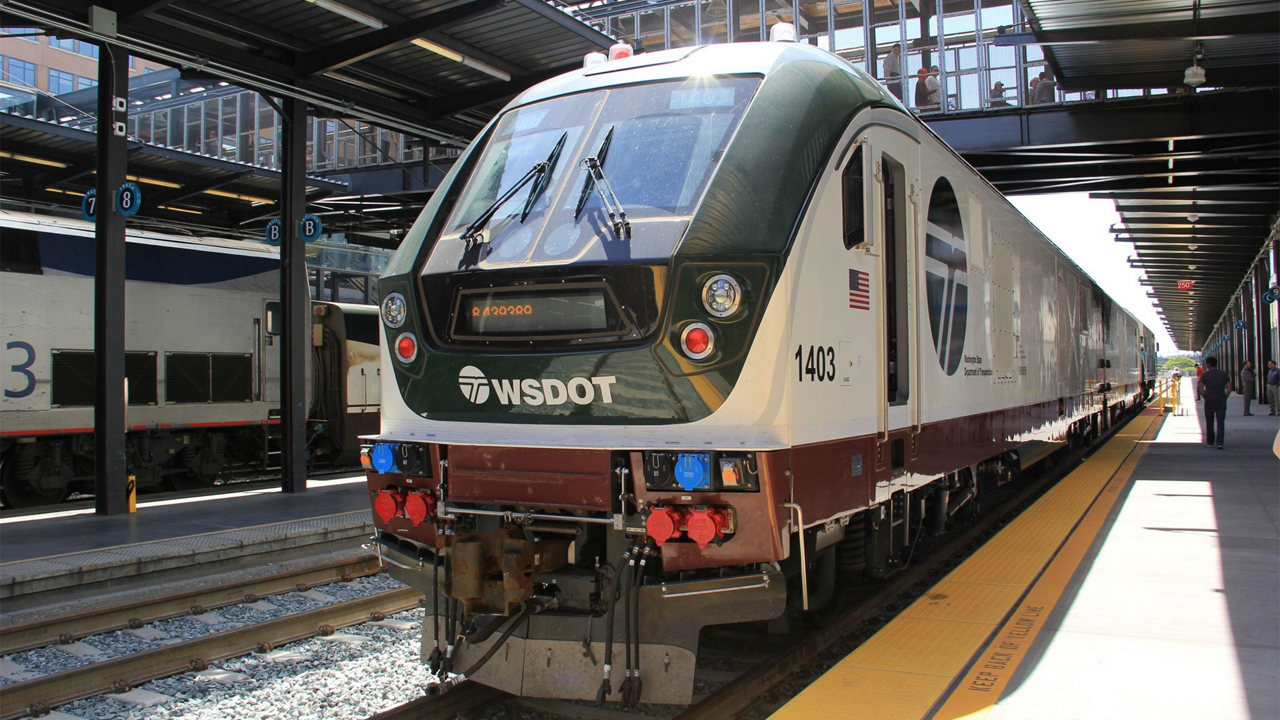 On March 7, Amtrak will be adding a second round-trip train between Seattle and Vancouver, B.C., restoring the Cascades line to pre-pandemic levels. (Photo Courtesy of Amtrak)

According to a Komo News report, Amtrak will be adding a second round-trip train between Seattle and Vancouver, B.C. on March 7, restoring the Cascades line to pre-pandemic levels.

According to the Komo News report, Amtrak notified the Washington State Department of Transportation (WSDOT) of the additional service this week, adding that it plans to “increase the daily number of trips between Seattle and Portland from four to six beginning in fall 2023.

Amtrak, in conjunction with WSDOT, Oregon Department of Transportation (ODOT), VIA Rail Canada and other federal agencies, restarted service to Vancouver via Cascades on Sept. 26. The Vancouver-Seattle service had been suspended since May 2020 when the border closed due to the COVID-19 pandemic.

Prior to the pandemic, more than 750,000 riders used the route connecting Washington, Oregon and British Columbia each, according to the Komo News report.

“I’m thankful that Amtrak is finally on the path to fully restore service in the Pacific Northwest,” Komo News reported U.S. Senator Maria Cantwell (D-WA) as stating. Cantwell serves also serves as Chair of the Senate Committee of Commerce, Science and Transportation. “I-5 corridor in the State of Washington is one of the most congested corridors in the nation and the Cascades service provides a convenient alternative to travelers,” Cantwell, added.

On June 6, 2022, The Seattle Times reported that a settlement had been reached more than four years after Amtrak Cascades train 501, on its inaugural Point Defiance Bypass run, derailed in DuPont, Wash., as it entered a 30-mph curve at approximately 79 mph.

According to The Seattle Times report, “Amtrak has agreed to pay former engineer Steven Brown for his pain and suffering caused by the [Dec. 18] 2017 derailment when his train sped off a curve in DuPoint, killing three people and injuring dozens.”

The derailment of Southbound Amtrak Cascades 501, bound for Portland, Ore., from Seattle, Wash., caused the lead locomotive and four passenger cars to fall from an overpass onto Interstate 5 where they struck eight vehicles. Three of the 77 train passengers were killed, and 57 passengers and crew members aboard the train and eight people on the highway were injured. The National Transportation Safety Board (NTSB) announced in May 2019 that failure to provide an effective mitigation method for a hazardous curve and inadequate training of a locomotive engineer led to the derailment.

Since the derailment, Amtrak said that all involved agencies have worked to:

• Upgrade simulator programs. “High-fidelity simulators with route specific details and conditions were utilized to greatly increase training opportunities on the route,” according to Amtrak.

• Conduct extensive public outreach on railroad safety. “Our partners and Amtrak conducted outreach in communities surrounding the Point Defiance Bypass, including DuPont, Lakewood, Tacoma, and Joint Base Lewis-McChord, prior to the return of service,” the railroad said.

Additionally, Amtrak, Sound Transit and WSDOT “have implemented or are continuing to pursue all safety recommendations set forth by the NTSB,” Amtrak said.

NJ Transit on Jan. 17 announced that it is expanding its Student Pass fare option in a pilot program to include eligible part-time students.

For the first time, NJ Transit says, beginning with February passes, in addition to full-time students, part-time degree-seeking students taking at least two courses will also be eligible for the Student Pass fare, which provides a 25% discount off the already discounted monthly pass at participating regional colleges and universities when purchased on the NJ Transit mobile app. In addition, all students utilizing the Student Pass can save big during the spring semester thanks to the return of the “Buy 3 Months, Get 1 Month Free” Student Pass promotion. This cost-saving program, NJ Transit adds, is back by popular demand beginning with February passes for college students traveling to and from campuses for the spring semester.

To qualify for the “Buy 3 Months, Get 1 Month Free” promotion, a student at a partner college or university must buy a student monthly pass via the NJ Transit mobile app for three consecutive months: February, March and April of 2023. When the student completes the qualifying purchases in February, March and April, they will receive a Student Pass equal to the lowest-price purchase made in the previous three months and valid for transportation in May 2023.

For a student to be eligible, a school must offer Student Pass registration via their website and verify a student’s eligibility each semester. The student must purchase their Student Pass using their school credentials on the NJ Transit mobile app. Once verified, Student Pass will appear each month as a ticket option during NJ Transit’s customary monthly pass purchase period, beginning at the 19th of the preceding month through the 10th of the travel month.

After the third qualifying purchase, a free monthly pass good for the month of May 2023 will be available for students who have purchased monthly passes for February, March and April. This free pass is non-refundable, non-transferrable and will not include travel to/from the Southeastern Pennsylvania Transportation Authority (SEPTA), Metro-North stations or Newark Liberty International Airport.

Through this promotion, NJ Transit says students can save more than 60% off transportation to campus during the spring 2023 semester (February-May) when compared to purchasing one-way transportation.

For a list of participating colleges and universities, visit njtransit.com/studentpass.

“The services NJ Transit provides have proven to be essential to a multitude of college students across the state, so I am pleased we are able to offer more students the Student Pass fare,” said New Jersey Department of Transportation (NJDOT) Commissioner and NJ Transit Board Chair Diane Gutierrez-Scaccetti. “Expanding the program to include discounts for eligible part-time students is emblematic of NJ Transit’s mission to enhance our services for all who wish to utilize public transportation.”

“As NJ Transit ridership continues to grow, we are doing everything we can in our power to continue incentivizing transit use,” said NJ Transit President and CEO Kevin S. Corbett. “Toward that end, we are pleased to expand our popular Student Pass program to include part-time students in addition to full-time students. College students using transit today will hopefully become tomorrow’s commuters.”