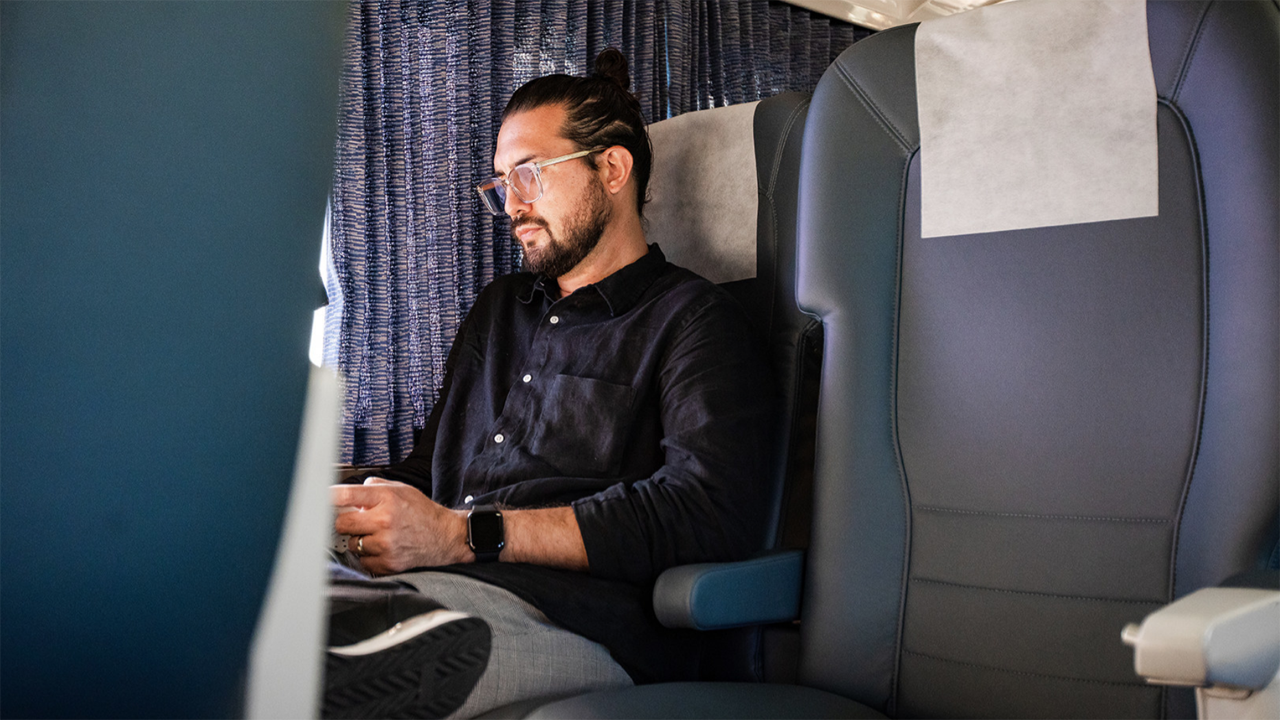 Business Class is an optional upgrade that provides benefits such as guaranteed seating, complimentary snacks and drinks, a dedicated attendant, and newspapers. In the morning, coffee, juice and pastries are available. In the afternoon and evening, snack packs are handed out with items like crackers, hummus, cookies and jerky, as well as beverages such as wine, soft drinks, water, and newly added Truly Hard Seltzer.

According to LOSSAN, additional amenities are available throughout the train, in both Business Class and Coach, including power outlets, tray tables, restrooms, a Market Café, and free Wi-Fi, which has been upgraded.

“We are delighted to offer our customers an enhanced Business Class travel experience as we continue to welcome them back to the Pacific Surfliner,” said Jason Jewell, interim Managing Director of LOSSAN. “Adding to existing perks such as complimentary drinks and snacks, and increased leg room, the new leather seats make a Business Class train ride along the Southern California coast even more comfortable and relaxing.”

A possible expansion of Shore Line East service is now under review by CTDOT, Amtrak and the Connecticut Commuter Rail Council, according WSHU Public Radio, based in Fairfield, Conn. “A law passed last year instructed the state Department of Transportation to undertake a $2.3 million study on extending Shore Line East to Westerly, Rhode Island, as well as establishing new rail routes from New London to Norwich, and new rail stations in Stonington and Groton,” the media outlet reported on Sept. 27.

The study was slated for completion in January 2022, but was delayed and will be presented in early 2023, according to state transportation officials, WSHU reported.

“What the study is looking at is what it would take to get this done,” said CTDOT spokesman Josh Morgan, according to a separate report by WTNH News 8 in Connecticut. “Bringing the freight rail lines up to the condition that can accommodate passenger rail. What kind of station needs would be required.”

CTA has completed installation of 173 security camera monitors in customer service booths at all 146 rail stations to help “employees stay aware of activity,” the transit agency reported on Sept. 26. Each booth is now equipped with a 21-inch monitor display that provides real-time feeds from that station’s security cameras. According to CTA, each monitor “is positioned to allow the on-duty employee to monitor the screen for activity throughout the facility while they carry out their assigned duties either inside or outside the CA [Customer Assistant] booth.”

Planning is now under way to install in each booth a new communications console, featuring a touchscreen monitor that will allow personnel to switch camera views and to have access to other station communications tools and functions, according to CTA. Work is expected to begin next year.

MARTA and Soccer in the Streets, along with the city of Atlanta and the Atlanta United Foundation, held a community celebration and soccer tournament to mark the official opening of StationSoccer at the Lindbergh Center rail station. While the celebration had been delayed due to COVID-19, the soccer pitch, which is adjacent to MARTA headquarters on Piedmont Road in Atlanta, opened in 2020, the transit agency reported on Sept. 27.

“The brainchild of Soccer in the Streets, StationSoccer is a citywide project to create a network of soccer fields connected by MARTA, eventually forming a 10-station league that’s affordable and easily accessible by transit,” according to MARTA. “StationSoccer was launched at Five Points Station in 2016, resulting in the first soccer field in the world built inside a transit station, and has since expanded to West End in 2018, East Point in 2019, and most recently Kensington Station this June.”

The StationSoccer program is slated to expand over the next few years, with plans for fields at the Doraville, East Lake, Bankhead, H.E. Holmes, and Civic Center rail stations, completing the “League of Stations,” MARTA said.

MARTA has also announced a TOD RFP for the Arts Center rail station in midtown Atlanta. The offering is located on six acres of land, along with air rights above the station and bus loop, between 15th and 16th Streets, along West Peachtree and adjacent to the Woodruff Arts Center. It is zoned SPI-16, “providing for significant mixed-use density, including affordable housing,” according to MARTA.

A pre-proposal conference is set for Oct. 11, a question and answer session is scheduled for Oct. 25, and proposals are due Dec. 15.

“Arts Center Station presents a tremendous development opportunity, which we hope will enhance our customer experience and ridership; positively influence the neighborhood; and add amenities, including affordable housing, which is so desperately needed in Midtown,” MARTA interim General Manager and CEO Collie Greenwood said.

Metrolinx on Sept. 27 provided a construction update for work on the Barrie GO Line in the greater Toronto area:

• Maple GO Station: Improvements are under way at the Maple GO Station in Vaughan that will make it easier for riders to access the station by foot, transit or by car. Also, adding a second track from Rutherford Road to McNaughton Side Road will enable Maple GO to support future all-day, train service in both directions. Crews are building the new pedestrian stair tower building as well as a retaining wall at Eagle Rock Way. The stair tower will have three levels: Customers will be able to store their bikes on the third level and catch their next scheduled York Region Transit or GO Transit bus; the second floor connects to the parking lot at ground level; and at the basement level, a tunnel will connect to the new west platform.

• Davenport Diamond Guideway: To support future two-way, all-day GO service on the Barrie Line, Metrolinx is building an elevated guideway for GO trains to travel above the Canadian Pacific (CP) tracks. The two rail lines, Barrie GO and CP, currently meet at the Davenport Diamond. The Davenport Diamond Guideway project includes construction of a new rail grade separation as well as the addition of a second main line track on the Barrie Line. The project will also see the replacement of the bridge at Bloor Street West, a new bridge over Wallace Avenue, a pedestrian tunnel at Paton Road, and rehabilitation of bridges at Dupont Street and at Davenport Road. The project spans from Bloor Street West to Davenport Road and crews continue to make progress. Here’s the latest update from Metrolinx:
—Elevated guideway installation: Crews have completed the launching operation, which supports the ongoing installation of bridge girders.
—Mechanically stabilized earth (MSE) wall construction: The MSE walls at the north section of the project are complete, and now under construction are the MSE walls on the south end of the project. The MSE walls will bring trains up to the height of the elevated guideway and back down to grade.
—Bloor Street bridge: Construction of the west span is finished.
—Wallace Avenue bridge: Crews have completed the south abutment structure and are working on the north transition wall structure. Once complete, the steel bridge girders can be installed. This bridge will eliminate the existing at-grade road crossing to allow trains to travel above traffic.
—CP bridge: Construction is complete and will eliminate the intersection between Barrie GO Line and CP tracks at the existing Davenport Diamond.
—Paton Road pedestrian underpass: Crews have completed the concrete works.

What’s coming up on the Barrie Line? According to Metrolinx, Toronto’s Caledonia GO Station will be directly integrated with connections to the Eglinton Crosstown LRT and will have amenities including heated platform shelters, bicycle parking, and complete accessibility enhancements. Caledonia GO is now in its detailed design phase, with construction slated to begin in mid-2023.

Additionally, the second phase of work at Aurora GO Station is currently in procurement, with work expected to start in 2023. This project will include construction of a second platform and installation of a second track, rail signal upgrades, a new pedestrian tunnel with elevators, and improved accessibility on the existing east platform.

California “Clean Air Day is built on the idea of shared experience to improve our community health,” SacRT General Manager/CEO Henry Li says. To get started, the transit agency is calling on the public to take the Clean Air Pledge and take advantage of a weeklong (Oct. 1-7) free-ride offer from SacRT, which includes all light rail, fixed-route bus (including Elk Grove and Folsom), on-demand SmaRT Ride microtransit shuttle, SacRT GO paratransit, and SacRT’s e-van services.

Here are 12 more tips from SacRT to “help clear the air”:

The $70 million project to bring Tri-Rail trains to downtown Miami will not be completed in November, according to Miami Today. David Dech, the new Executive Director of South Florida Regional Transportation Authority, which operates Tri-Rail, told the Board on Sept. 23 that trains will reach Miami in 2023, the newspaper reported on Sept. 27. Dech was unable to provide a date since he is negotiating contracts with track-owner Florida East Coast (FEC) Railway and with Alstom Signaling Operation LLC, the paper noted. The announcement comes four months after former Executive Director Steven Abrams “assured the public that Tri-Rail trains would be in downtown Miami by November.”

“At the June board meeting, Mr. Abrams explained that the company was requiring more dispatchers and a new dispatch desk at the downtown station,” according to Miami Today.

“Training the staff to operate the trains and fulfilling a list of about 80 requirements from the Federal Railroad Administration are two additional steps to complete prior to bringing Tri-Rail service into downtown Miami,” the newspaper reported. “… Within 30 to 90 days, the authority is to work on a tri-party agreement with Brightline and FEC for a vehicle qualification test, complete platform modifications to meet level boarding to fit the trains, complete the Automatic Train Control software change, and amend the agreement for dispatch services with Brightline and FEC to hire and train additional staff.”

The project is at 70% completion, reported Miami Today, which noted that “Brightline was tasked and paid by Tri-Rail to build the link through platforms into the Miami Central Station that would accommodate Tri-Rail’s trains. The project was to be delivered back in March 2017 but is still to be completed.”

Dech, at a Sept. 22 Citizens’ Independent Transportation Trust (CITT) meeting, “signaled that the conversations with Brightline and FEC have moved forward in a positive direction,” according to the newspaper.

“At the request of CITT Executive Director Javier Betancourt, the Miami-Dade County Office of the Inspector General made a final contract oversight report, released April 5,” Miami Today reported. “Inspector General Felix Jimenez made three recommendations that the authority has completed, according to documents delivered to the CITT.

“The authority hired a project manager to oversee the project schedule, hired CE&I to oversee the platform modifications, holds bi-weekly coordination meetings with Brightline and ‘continues to coordinate with FECR as needed.’”