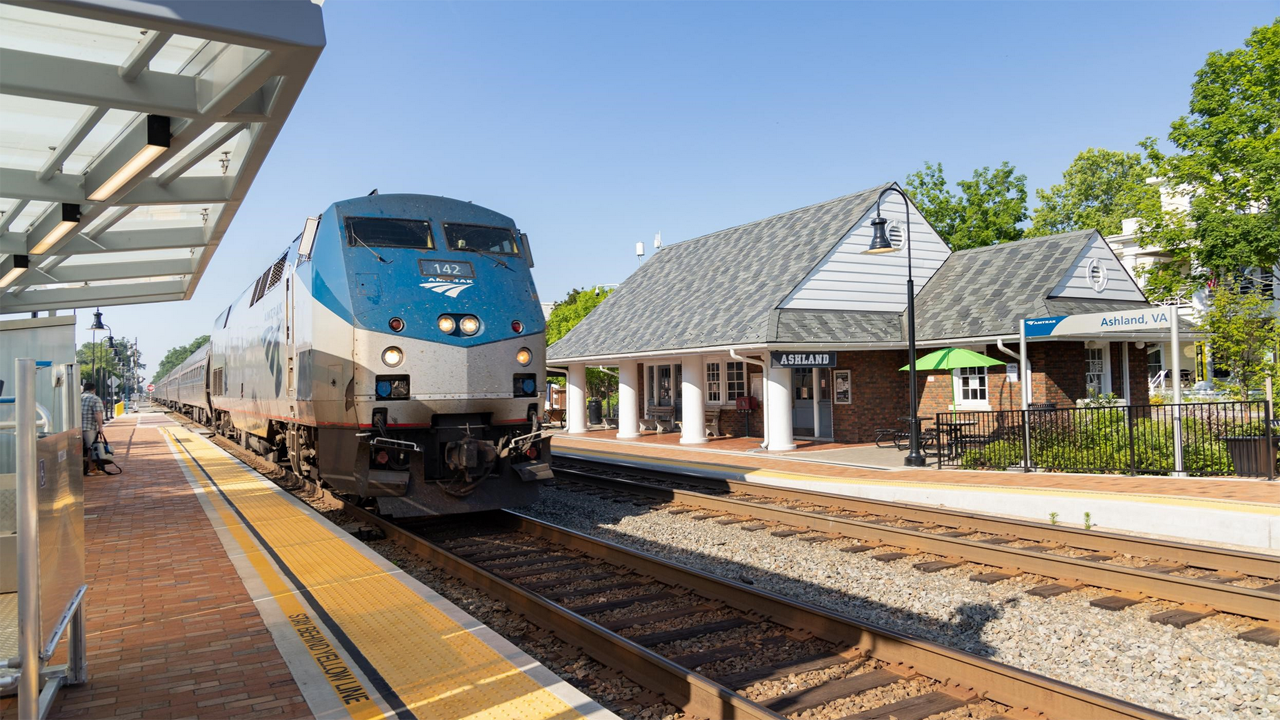 Amtrak and the Virginia Passenger Rail Authority are partners in bringing Amtrak Northeast Regional daily service to Ashland Station, which has been upgraded for accessibility. (Photograph Courtesy of Amtrak)

Amtrak, the Federal Railroad Administration (FRA), Virginia Passenger Rail Authority (VPRA) and the town of Ashland teamed to improve accessibility and safety at the Ashland Station, served by Amtrak Northeast Regional. The project is part of Amtrak’s ADA Stations Program. It included construction of two brick platforms, placement of a mobile lift on each platform, and an accompanying canopy. Additionally, Amtrak and the town redesigned one block of N. Railroad Avenue, where the station is located, to allow for a modified vehicle traffic pattern. The new platforms connect with sidewalks, crosswalks and a pedestrian grade crossing so riders can safely travel between trains and the station.

“The upgrades at the Ashland station make rail service more accessible and an even better option for those travelers with mobility issues,” VPRA Executive Director DJ Stadtler said. “Through the strong partnership between the town of Ashland, Amtrak and VPRA, using the Ashland station is now safer and more convenient for all Amtrak passengers.”

Last fiscal year, Amtrak brought into ADA compliance 16 stations for $58 million; this fiscal year another 41 stations are targeted for completion at a forecasted investment of $126 million, the railroad reported.

The APTA Rail Safety & Security Excellence Awards recognize public transit providers “for their innovative and proactive safety and security programs” that serve as benchmarks for other providers to follow, according to the association.

“Each and every day, our rail professionals closely work together to provide safe, efficient and comfortable transportation to all Americans,” APTA President and CEO Paul P. Skoutelas said. “The industry constantly seeks new avenues of addressing security and safety needs, implementing fixes, and sharing the results with their colleagues across the country. I want to congratulate those being honored for their contributions to the industry. Their work provides the bulwark that makes public transportation more efficient and safer for their passengers, employees and communities nationwide.”

FTA required HART to submit a Recovery Plan documenting how it will complete—within the amount of funding available—the 20-mile, 21-station rail line in O‘ahu between Kapolei and Ala Moana Center (see map below). Due to a funding shortfall estimated in March 2021, the transit agency’s plan proposes truncating the project by 1.25 miles with an interim terminus at the Civic Center Station, located at the intersection of Halekauwila Street and South Street, and deferring the Pearl Highlands Parking Garage. The moves will keep the overall cost under $10 billion, according to HART, which said it remains committed to completing the full scope of the project to the Ala Moana Transit Center in a subsequent phase. The plan was approved by the HART Board of Directors; Honolulu City Council Committee on Transportation, Health and Sustainability; and the full Honolulu City Council prior to submission.

HART reported it is “confident that the Recovery Plan will be approved by the FTA and will enable the project to receive the remaining $744 million in federal funding under the Full Funding Grant Agreement signed in 2012.”

“We are so thankful for the support of Mayor Blangiardi, the HART Board of Directors and the Honolulu City Council as we worked together to develop a plan that allows us to deliver a fully functional rail system to serve the people and visitors of O‘ahu,” HART Executive Director and CEO Lori Kahikina said. “We look forward to discussing the details of the plan with the FTA and formalizing a path forward.”

The first major phase of construction on the C$32 million Brentwood Town Center Station improvement project will begin June 20. It will be the first station on the SkyTrain Millennium Line to receive upgrades since the line opened in 2002. Each weekday in fall 2021, about 4,500 riders boarded SkyTrain at Brentwood, which links with seven bus routes to UBC, New Westminster, Metrotown, North Vancouver, Coquitlam and downtown Vancouver.

When complete in 2024, the station will offer a new elevator at the street level of the southern entrance; an expanded mezzanine with more fare gates and customer space; two new escalators; replacement staircases with enclosed glass to provide protection from the weather; additional real-time passenger information displays; improved lighting; and a new public art installation.