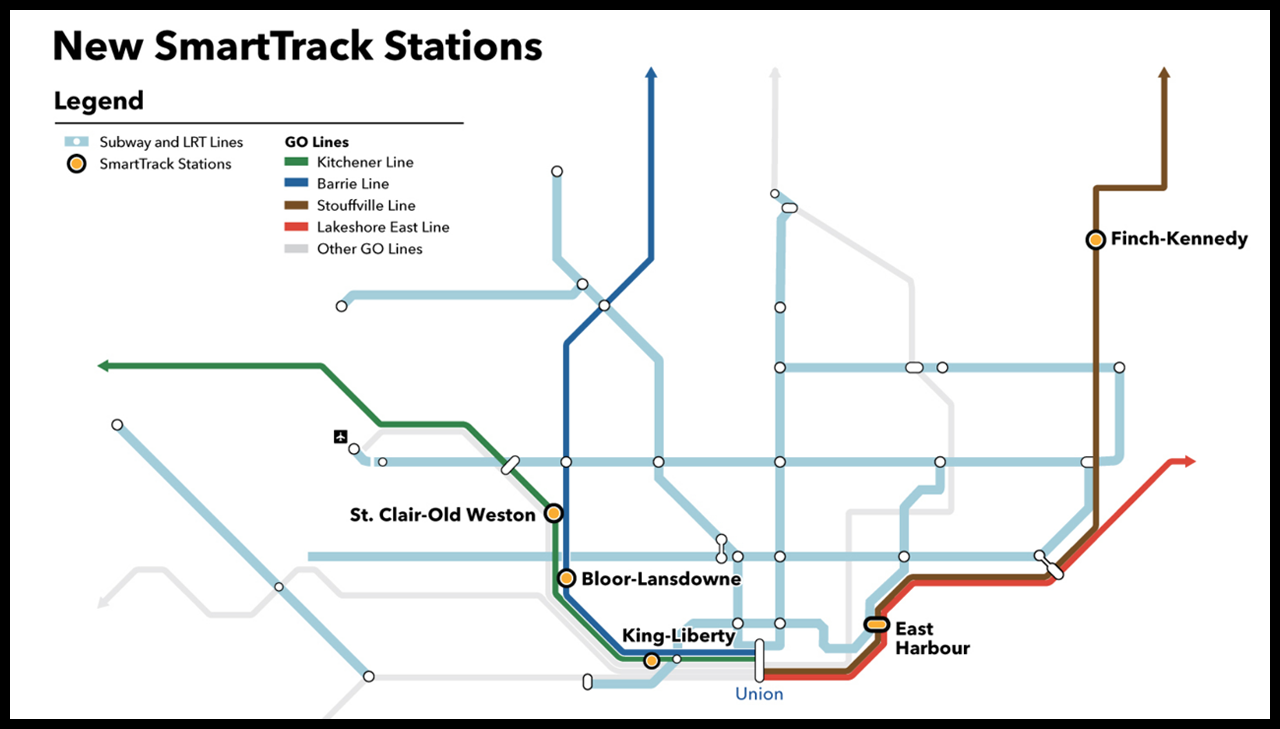 “With funding from the city of Toronto and the federal government, the city will be able to make use of [roughly 40 kilometers or 24 miles of] Metrolinx’s GO rail infrastructure in Toronto to remake the regional commuter service into an urban rapid transit network,” Metrolinx reported on Aug. 17.

The province of Ontario and the city of Toronto have signed a revised agreement in principle (AIP) for the SmartTrack Stations program, finalizing its scope and allowing Metrolinx to move forward with five new GO Transit stations.

“With funding from the city of Toronto and the federal government, the city will be able to make use of [roughly 40 kilometers or 24 miles of] Metrolinx’s GO rail infrastructure in Toronto to remake the regional commuter service into an urban rapid transit network,” Metrolinx said of SmartTrack on Aug. 17. There would be connections to four existing or planned subway lines and light rail transit services as well as nine local transit service from feeder bus or streetcar routes. (See map above.)

The SmartTrack proposal to use existing GO corridor infrastructure to provide more frequent transit service in Toronto was introduced in 2014.

The SmartTrack Stations program AIP launches the procurement process for constructing four stations. Metrolinx has issued Request for Proposals (RFP) for the St. Clair-Old Weston, Finch-Kennedy and King-Liberty stations, and a Statement of Qualifications (SQ) for the Bloor-Lansdowne station. Awards are anticipated this fall. A fifth station, East Harbour, will be delivered through Ontario’s Transit-Oriented Communities Program.

All five stations are expected to be open by 2026, according to Metrolinx. By 2041, they are projected to attract a combined 24,000 boardings and transfers during the average weekday peak hour and 3,400 new daily riders to Toronto’s transit system each weekday.

• Finch-Kennedy Station: Located on Finch Avenue East between Milliken Boulevard and Midland Avenue, the station will provide GO Stouffville corridor riders with access to frequent Toronto Transit Commission (TTC) bus connections on Finch. It will be outfitted with canopies and heated shelters.

• East Harbour Station: “Anticipated to be a major transit hub, this interchange station on the Lakeshore East GO line will provide seamless connectivity to more GO services and local transit, as well as the [planned 15.6-kilometer or 9.7-mile, 15-station free-standing] Ontario Line [subway],” Metrolinx reported. This new GO Station will be in the Riverdale neighborhood, immediately east of the Don Valley Parkway and south of Eastern Avenue, on the Lakeshore East GO line.

• Bloor-Lansdowne Station: This new station—on Bloor Street West between St. Helen’s Avenue on the Barrie GO line—will feature bike parking, an entrance at Bloor Street (lower) level and at platform (upper) level, a plaza and landscaping at the platform level, one tunnel connecting East and West platforms, and a multi-use path from the Davenport Diamond greenway north of Bloor Street to Dundas, according to Metrolinx. The multi-use path will be routed adjacent to the Barrie GO Rail Corridor and will provide connection to the West Toronto Railpath, the agency noted.

“As travel patterns change, we know how important it is for Torontonians to be able to use transit to get around their city,” Metrolinx CEO Phil Verster said. “In collaboration with the province of Ontario and the city of Toronto, we are pleased to enable the use of GO Transit’s rail infrastructure to build stations that will further enhance this city’s transit network.”