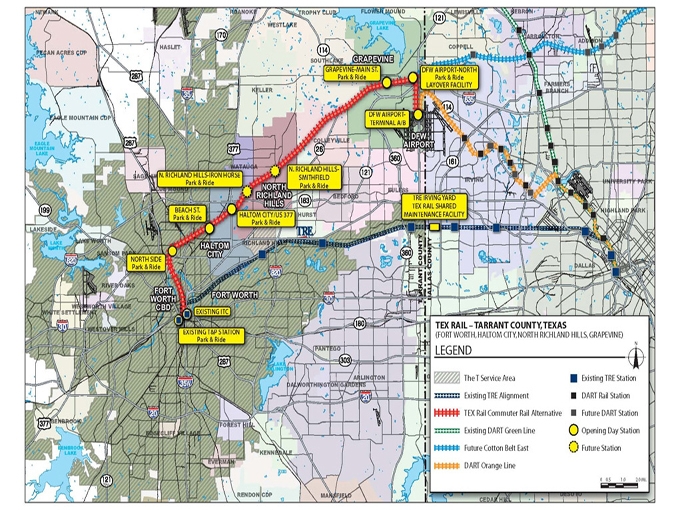 The Fort Worth Transportation Authority’s (The T) Board of Directors approved on April 27, 2015 several contracts related to TEX Rail, a regional/commuter rail service that will run on a 27-mile corridor from downtown Fort Worth, northeast across Tarrant County to Grapevine and into Terminal B at DFW Airport.

The first contract authorized is with a joint venture of Archer Western and Herzog for pre-construction services on TEX Rail, which is projected to have average daily ridership of 10,000 in its initial year of service. The joint venture will work closely with the project’s design team “in order to achieve a more efficient and cost-effective design that has been planned and coordinated with TEX Rail’s various stakeholders,” The T said.

“This contract for pre-construction services is very important because it will lay the groundwork for future construction,” said Paul Ballard, The T President and CEO. “It will help isolate and mitigate any construction risks, costs and schedule concerns, and will make TEX Rail construction more effective and efficient.”

The T Board also authorized a second contract with Stadler Bussnang AG for the purchase of eight diesel multiple unit (DMU) railcars.

“The T began the procurement process for DMU vehicles in 2014 due to the three-year average lead time for developing specifications, production, delivery and operation training for staff,” Ballard said.

Once the order has been provided, vehicle assembly will be in North Texas.

In addition, The T Board approved an Action Item for Final Design for two North Richland Hills stations—the Iron Horse Station and the Smithfield Road Station—and moved forward on land purchases for the TEX Rail project.