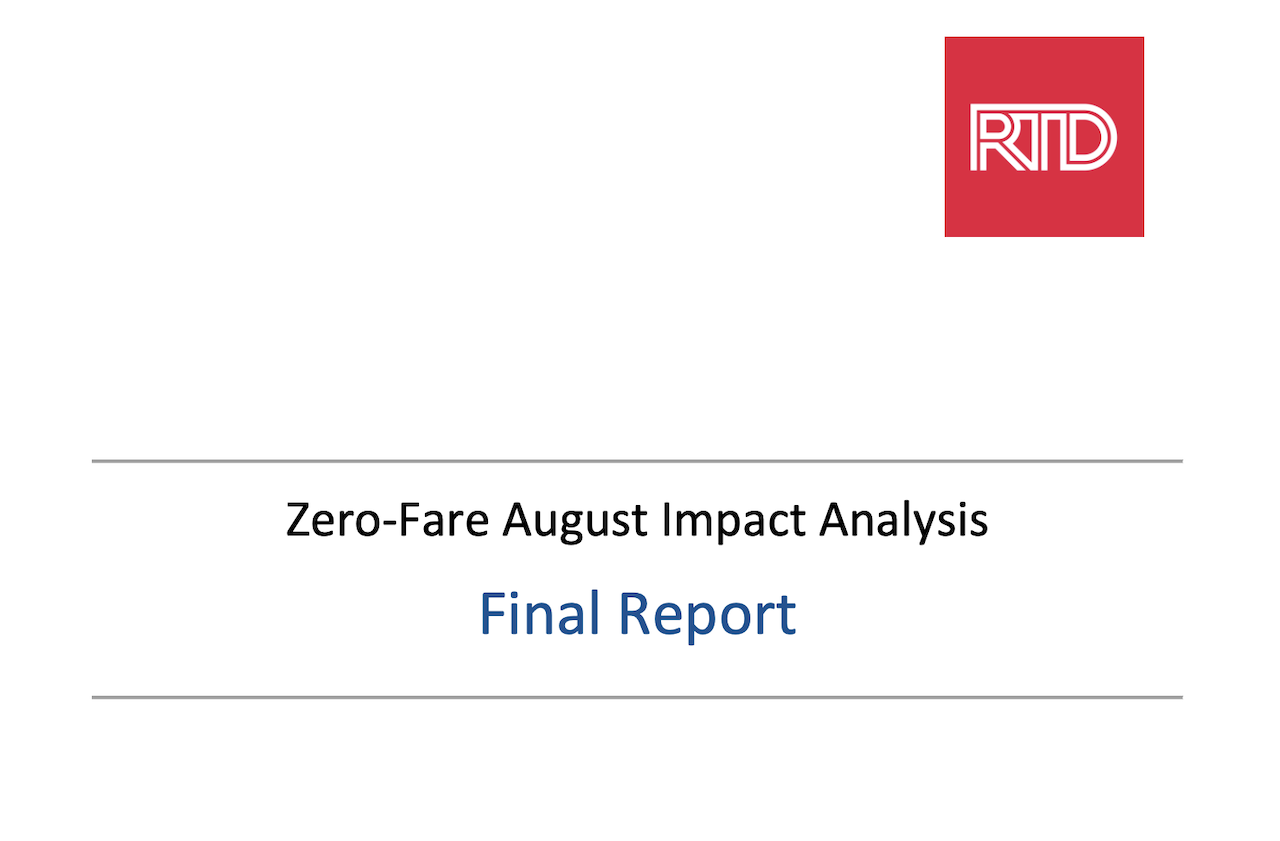 The Regional Transportation District (RTD) on Nov. 30 announced that it has submitted a final report to the Colorado Energy Office detailing the outcomes of its inaugural Zero Fare for Better Air (ZFBA) period, which took place this past August, as a requirement of the Ozone Season Free Transit Grant Program created in the Colorado Senate Bill 22-180.

During RTD’s inaugural period of ZFBA, an initiative “designed to reduce ground-level ozone by increasing the use of public transit across the state,” transit ridership increased systemwide, but catalysts for these results are unclear, according to the report. Additionally, the report states that “the agency was able to support the ridership to increase without incurring significant costs related to increased service demand; the program did not yield significant operating impacts, nor did it lead to a major increase in quality of life or crime incidents on RTD services; and the impacts of the initiative on air quality are difficult to quantify, as there was no baseline provided.”

According to RTD, the Ozone Season Free Transit Grant Program, provides funding to recover up to 80% of the lose fare revenue and other costs incurred by RTD if fares are offered at no cost to customers for at least 30 days during ozone season in 2022 and 2023. RTD, the agency says, provided zero-fare service on all transit modes—bus, rail, paratransit and microtransit—during August—Colorado’s highest ozone month. The total cost to RTD associated with the initiative during that month was approximately $10.3 million, the agency added.

The final report (downloadable below) assess the impact of the ZFBA program on ridership, revenue and costs, operations and customers; evaluates operational impacts that include overcrowding, on-time performance and impact on RTD’s frontline employees; and includes recommendations for RTD staff should the initiative be continue next year.

RTD General Manager and CEO Debra A. Johnson affirmed the agency’s commitment to environmental stewardship when she announced the initiative in June, the agency said. This week, Johnson noted that “the agency’s overall experience was positive, with customers saying they appreciated the zero-fare period and there being minimal disruptions to day-to-day operations.” Johnson called the initiative “an example of working with the General Assembly and administration to implement a successful partnership,” and cautioned that “drawing conclusions on the success of a one-month pilot is challenging, as transit trends and date are influenced by seasonal factors, such as vacations and the resumption of the school year, in addition to persisting pandemic impacts and large scheduled events.”

“The data that were gathered provide a snapshot into various potential and experienced impacts across the agency’s services, all of which will help RTD garner a better understanding of customer behavior and how to approach future zero fare periods that extend beyond a day or two,” Johnson said, referencing the agency’s most recent election-related zero fare days this fall. “The purpose of public transit lies in the value it provides, and RTD’s participation in this initiative enabled customers to experience the value of our services, whether their travel habits changed for a day, a month or the whole of the pandemic.”

Highlights from the report are noted within the following categories: