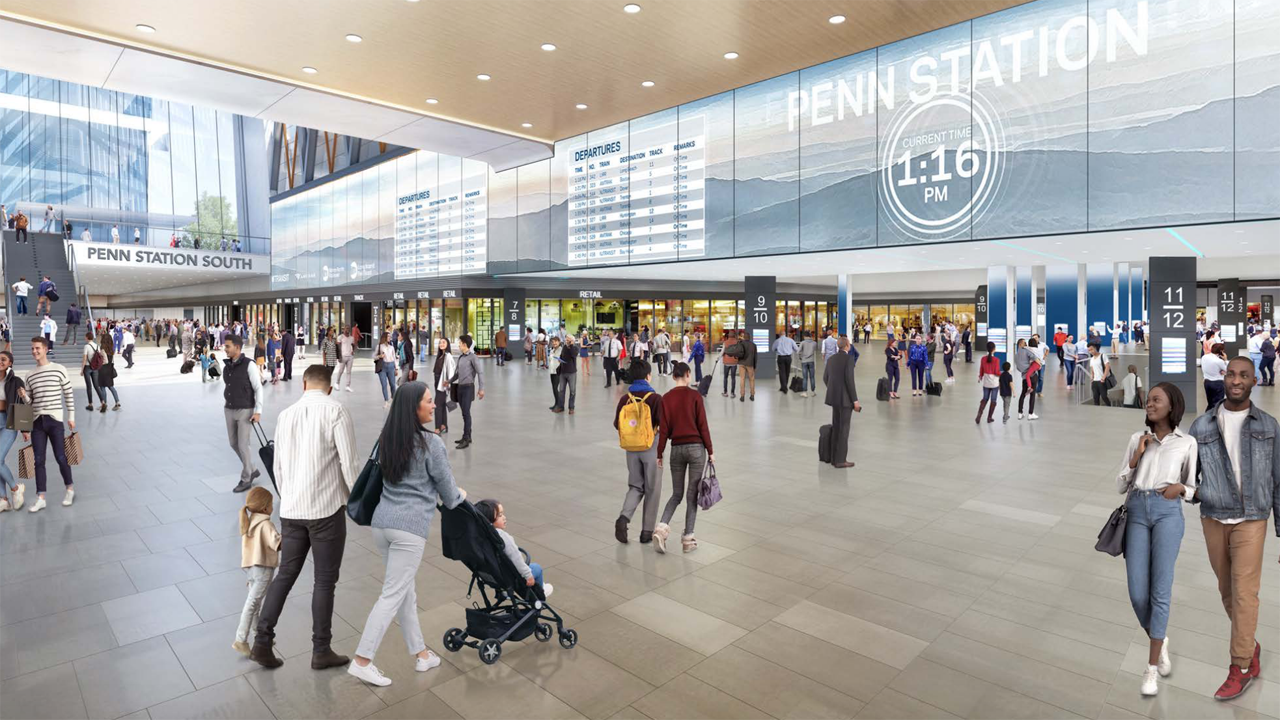 Rendering of the proposed reconstruction of the existing Penn Station in New York City, courtesy of the office of New York Governor Kathy Hochul

Govs. Kathy Hochul of New York and Phil Murphy of New Jersey on June 9 made the announcement, which followed the Nov. 3, 2021 plan released by Hochul seeking to prioritize and expedite reconstruction of the existing station. According to MTA, the station serves more riders than LaGuardia (N.Y.), John F. Kennedy (N.Y.) and Newark (N.J.) airports combined.

While no date has been set to start the project, it is estimated to take 5-6 years to complete and come with a price tag of $6 billion-$7 billion. In parallel with Penn Station reconstruction design, MTA said the partners anticipate beginning a review of the project under the National Environmental Policy Act and the National Historic Preservation Act.

Amtrak’s operation in the new Moynihan Train Hall, which opened Jan. 1, 2021, “provides an opportunity to overhaul Penn Station, eliminating the bulk of the first subterranean level to open up the main concourse to natural light, improving retail and other user amenities, increasing safety and security, significantly expanding passenger circulation areas, expanding entrances and exits, and making it easier for passengers to navigate within the station and to connect to their destinations beyond,” MTA reported.

The rebuilt station, in accordance with an MTA-developed master plan, will also:

Future expansion of Penn Station is slated to add track and platform capacity and be fully integrated with a reconstructed Penn Station.

Watch a newly produced video showcasing the vision for a new Penn Station:

Also announced on June 9 was the formation of a Penn Station Area Public Realm Task Force, which “will advise Empire State Development on public realm improvements to revitalize and beautify the area around Penn Station, including reimagined streetscapes and new open spaces,” according to MTA. It will comprise representatives of involved state and city agencies (from the governors’ offices and state departments of transportation to MTA, New Jersey Transit and Amtrak); local elected officials; community boards; civic organizations; and other stakeholders.

The Task Force will be charged with developing a Public Realm Concept Plan, assisted by architect Claire Weisz’s WXY Studio, that includes a prioritized list of public improvements. Empire State Development and the Task Force will also work with the New York City Department of City Planning to ensure work is consistent with the city’s broader planning goals.

MTA reported that a Penn Station Area Public Realm Fund will be created—funded by a portion of the real estate revenues generated by new redevelopment of the general project plan sites—starting with a commitment of $50 million in early project revenues.

“The transformation of Penn Station into a world-class, commuter-focused transportation facility befitting the central hub of the greatest city in the world cannot come soon enough,” Gov. Hochul said. “We have shared a vision of a single-level unified station with soaring ceilings that welcome natural light; clear, intuitive sightlines; more circulation space; and more connectivity to streets and platforms.”

“For several decades, Penn Station has not provided New Jersey commuters and visitors with the comfort and convenience they deserve,” Gov. Phil Murphy said. “Now, as a result of partnerships across agencies and state lines, we are prepared to take the next step toward the long-awaited transformation of this pivotal transportation hub.”

“The MTA has already completed the iconic new entrance to Penn on Seventh Avenue and we are approaching the finish line on the project to double the size of the Long Island Rail Road concourse in the station,” MTA Chair and CEO Janno Lieber said. “The next steps are laid out in the master plan we developed.”

“I look forward to working with our partners on a design that ultimately transforms and expands the station into an open, welcoming and modern facility that meets the needs of today, and accommodates the demands of tomorrow,” New Jersey Transit President and CEO Kevin S. Corbett said.

“As the owner and steward of the station, we are eager to advance the station’s transformation,” Amtrak Board Chair Tony Coscia said.