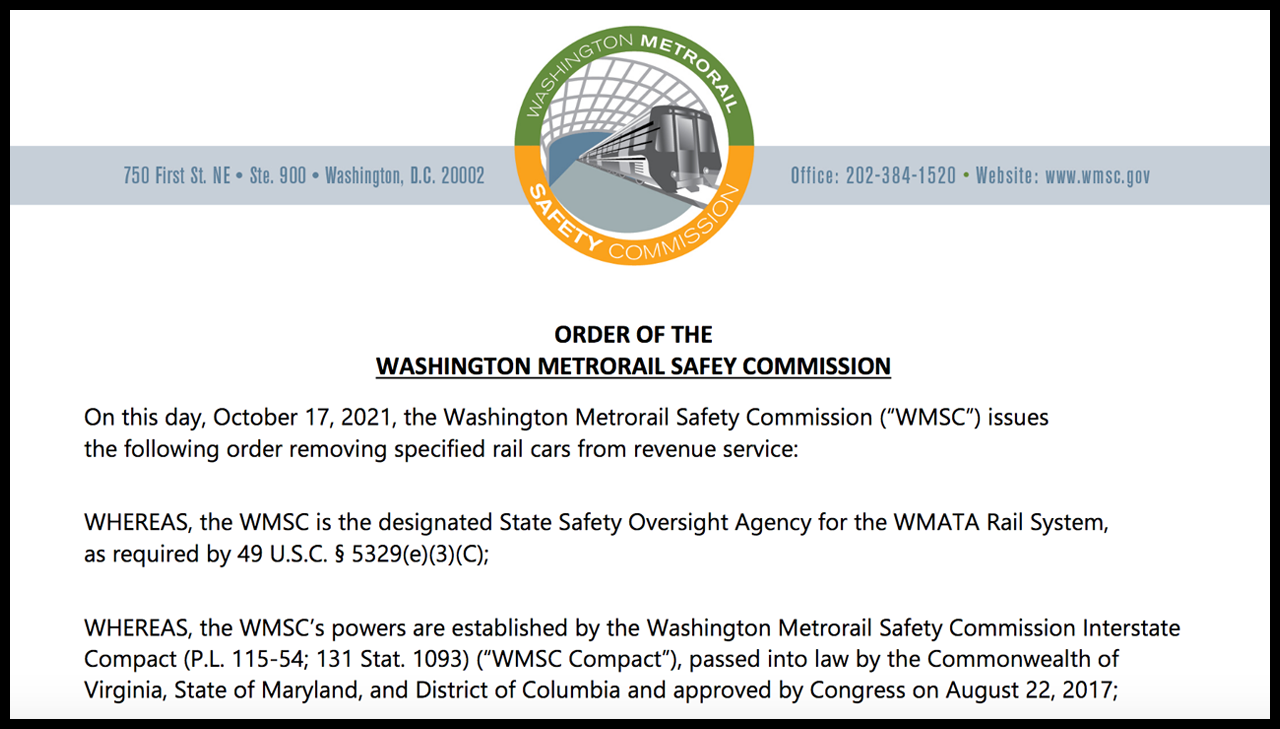 As part of the investigation into the Oct. 12 derailment on Washington Metropolitan Area Transit Authority’s Blue Line, all 748 7000-series rapid transit cars were sidelined on Oct. 18.

The derailment of WMATA car 7200, one of eight on train 407, occurred at 4:51 p.m. between the Rosslyn and Arlington Cemetery stations. Of the 187 riders on board the train, one was taken to the hospital with non-life-threatening injuries, according to the National Transportation Safety Board, which held a media briefing on Oct. 18 (see update below) and noted that the last time the derailed car was inspected was July 29, 2021.

According to WMSC:
• “The National Transportation Safety Board investigation … found that the fourth axle of Railcar 7200 was out of compliance with the 7000 Series specifications for the wheel and axle assembly.
• “Railcar inspections conducted as part of the derailment investigation have found similar defects in 7000 Series railcars that were not involved in the October 12 accident.
• “The prevalence of this defect throughout the 7000 Series railcar fleet is unknown and an inspection interval that is adequate to detect this defect before a safety event occurs has not been determined.”

The 7000-series cars, built by Kawasaki Rail, started entering revenue service in 2015. They represent nearly 60% of WMATA’s approximately 1,200-car fleet, according to a Washington Post report.

In addition to removing those cars from service, the safety commission said that WMATA must also “develop a plan, under the oversight of the WMSC, to assess the cause, and to provide for the detection and prevention of wheel gauge anomalies in 7000 Series railcars; and implement a plan that provides for the safe return to revenue service of each 7000 Series railcar.”

Without the cars in service, WMATA said it would operate about 40 six-car trains on Oct. 18, with trains on all lines departing every 30 minutes. Reduced service is expected to continue until at least Oct. 24, WMATA reported late on Oct. 18. Beginning Oct. 19, trains will operate every 15 minutes on the Red Line and will continue to operate every 30 minutes on all other lines. Silver Line trains will operate between Wiehle-Reston East and Federal Center SW only.

“While we continue working hand-in-hand with the NTSB, FTA [Federal Transit Administration] and WMSC on the investigation, I want to assure our customers that their safety is driving every decision being made,” WMATA General Manager Paul J. Wiedefeld said on Oct. 18. “We apologize for the reduced service, and ask for our customers’ continued patience and support as we work to get Metro back to normal operations. I want to thank Metro [WMATA] employees who are working around the clock. Your dedication is appreciated.”

“The Board is monitoring the investigation’s process, while supporting management’s effort to follow the data and take safety precautions as we learn new information,” WMATA Board of Directors Chair Paul C. Smedberg said. “As a function of its oversight responsibility, the Board will take any actions necessary to ensure the safety of Metro’s customers and employees as the facts of the investigation develop.”

According to The Washington Post, WMATA’s 6000-series cars, built by Alstom, have been out of service since November 2020, following two train-separation incidents on the Red Line. Representing about 15% of the agency’s fleet, WMATA “discovered that some of the apparatus that joins the cars was restored with the wrong parts or tools, and it has only recently been returning a handful of the 184 cars to service,” the Post reported.

WMATA “will now lean on its 1980s-era 2000 and 3000 series cars” for service, according to the Post. Those cars were manufactured by Italian firm Breda (now Hitachi Rail Italy). WMATA currently operates a combined fleet of 360 cars of these types.

In March, WMATA awarded a contract to Hitachi Rail Washington to design and build an initial order of 256 8000-series cars. If all the options in the contract are exercised, a total of 800 cars will be supplied to WMATA worth up to $2.2 billion.

On Oct. 18, NTSB Chair Jennifer Homendy and Investigator-in-Charge Joe Gordon held a media briefing. See their comments, in part, below, as well as a video of the briefing. Parties to the investigation, Homendy noted, are the Federal Transit Administration, WMSC, WMATA and the Amalgamated Transit Union.

“What’s significant for us, along with other issues, is that the derailment just south of Rosslyn was the last of at least three known derailments of train 407 that that train experienced that day,” Homendy reported. “There may have been other derailments that day … [and] there could have been derailments involving that train in the days leading up to Oct. 12.”

Train 407 operated on both the Blue and Silver lines on Oct. 12, according to Homendy. She provided a service timeline: The train ran on the Blue Line from the start of the day until 11 a.m., and then switched to the Silver Line; it returned to the Blue Line at 1:43 p.m. The train traveled through Arlington Cemetery at 3:23 p.m. on track 1 where it derailed and rerailed itself, according to Homendy. “Investigators recovered broken sections of a brake disc around the Arlington Cemetery area,” she said. The train “then continued past Arlington Cemetery to Largo Town Center. The train arrived at Largo and headed back to Franconia on track 2. It derailed and rerailed itself at Largo at 4:13 p.m. Investigators again recovered broken sections of brake disc at Largo. It then traveled 15 miles back to Rosslyn, where we know the ‘known’ third derailment occurred on the way back to Franconia about 150 feet south of the Rosslyn Station at 4:51 p.m. The train traveled another 1,800 feet when it stopped and came to rest in the tunnel.”

The point of the “known” derailment was identified in a switch just outside Rosslyn Station, according to Gordon, who provided details of the investigation so far. Investigators identified “car brake disc parts that were dislodged from the car during the derailment,” he said. “As the investigation continued, we noted damage on the No. 1 track north of Arlington Cemetery Station. In this location, we also identified and recovered additional brake disc parts. These parts were different from the previously recovered parts. We noted indication of a prior derailment in the switch in this area. Once we confirmed that there was more than one derailment, we set out to see if we could find any other areas on this train’s route where derailments had occurred. This led to several investigative actions. WMATA initiated a special track inspection along the route that the train had traveled. NTSB reviewed measurements that were taken from a system that’s onboard the 7000-series cars, some of the 7000-series cars, that measures in-train forces, and we also conducted a review of station platform video to see if any of these events were captured on platform video as the train was traveling. This led us to another derailment location outside of the Largo Town Center Station, about 15 miles from the Arlington Cemetery Station; that’s about 15 track miles from the previously identified derailment. In this location, we again saw evidence of a ground-running derailment and car-body movement. We also collected additional brake parts. In addition, WMATA reiterated an existing rule that they have that their operators report rough track that they encounter during regular operation. On the derailed car, we found that the wheels had moved outboard on the axle, causing the train to derail when traveling through switches. So the wheelsets have a gauge that’s standard that interfaces with the track that’s also a standard gauge. As these wheelsets went outboard on the axle, that caused the train to encounter switches differently than it’s designed to go through the switches. So based on the findings, WMATA began an inspection of all [748] 7000-series cars.”

During the course of the investigations, “we were made aware that WMATA was aware of this situation with the wheel assemblies, going back to 2017,” Homendy said. “They made us aware of, and I want to stress that these are preliminary numbers; these numbers could change over the course of the next few days, weeks or months. We’re continuing to follow up on this, so again, I just stress this is preliminary. But we were made aware of two failures in 2017, two failures in 2018, four failures in 2019, five in 2020, 18 in 2021. So these are going up. And that was before Friday [Oct. 15 when inspections of the 7000-series cars began], so that totaled 31; adding to that number are the failures that were uncovered as a result of their inspections, which were initiated on Friday, which uncovered, so far, an additional 21 failures. So what we’re looking at is going from two in 2017; two in 2018; four in 2019; five in 2020; plus 18 plus 21 for a total of 39 in 2021, which is significant. So we’re talking in total, all of that added up, 52; but again, that’s preliminary numbers. They may increase because currently, we are aware that of the 748 cars in the series, they have inspected 514 [so far], so that number could go up.”

Regarding the 31 failures in 2021, Homendy explained that NTSB was “informed that they did not result in a derailment, that they were identified through measurements in their 90-day inspection intervals. But again that’s something that we have to confirm. With respect with how they [the wheels] were able to get back on [the track], my understanding so far is that WMATA was working with Kawasaki to address potential safety issues. We have to still get information and data on how that was addressed, what discussions were taking place, what data they relied on for determining what the safety issues were, and the decision-making in the resolution that they chose. So that’s more information to come.”

“We are concerned about other transit agencies in the United States,” Homendy reported. “These cars were made by Kawasaki, so we may at some point issue an urgent recommendation, or I’d say if you are a transit agency operating in the United States, and you’re listening, make sure you’re checking your cars as well because this is something that we’re going to be looking at in the course of this investigation to determine if there are more systemic issues throughout the U.S., throughout transit systems operating in the U.S.”