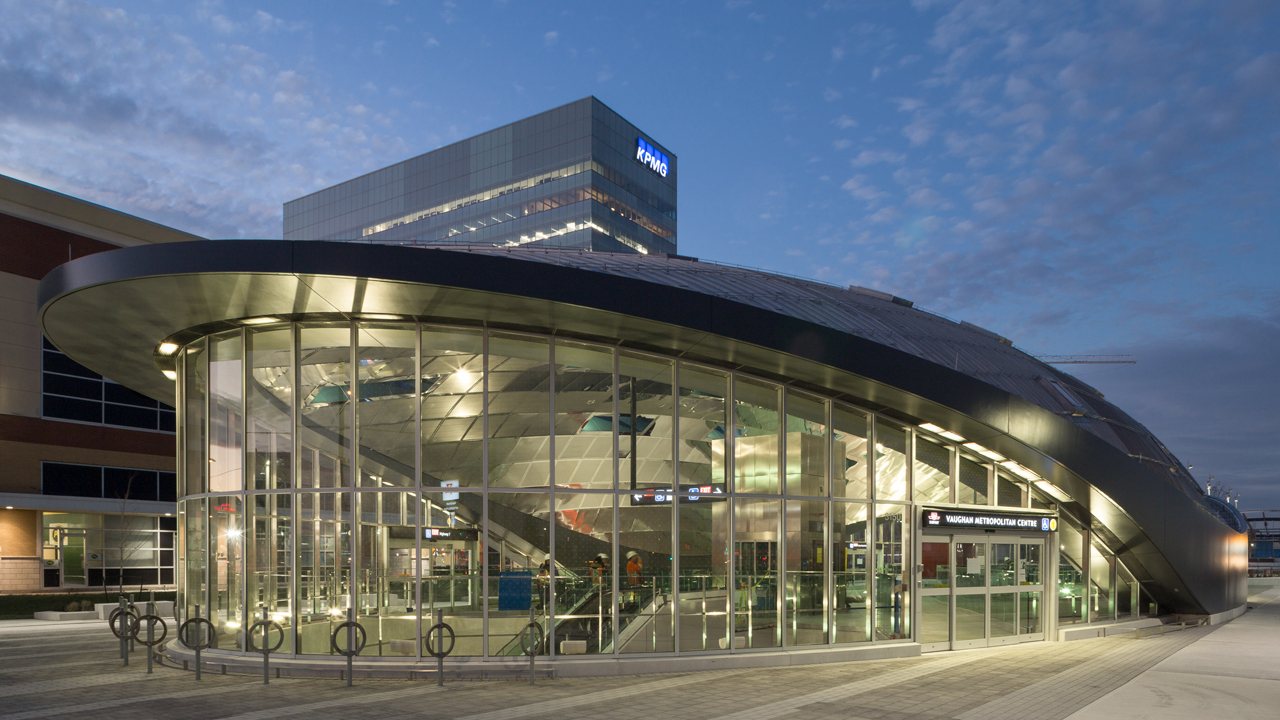 The TTC’s Vaughan subway extension officially opened for passengers on Sunday, Dec. 17, 2017, almost a decade after construction began in February 2008. The 5.30-mile line represents the first rapid transit operation outside the existing city of Toronto, into the northwestern suburb of Vaughan.

The Vaughan extension is actually the fourth one of the original, 4.35-mile Yonge Street Subway, Canada’s first, opened in 1954. The second extension was the University Avenue subway, about two miles long, Union Station to St. George Station, dating from 1963. The third was the Spadina Subway extension, extending about six miles from St. George to Wilson Station. In 1996, this was pushed 1.2 miles further north, to Sheppard Avenue (at Downsview Station, since renamed Sheppard West).

The designation “Spadina Subway,” incidentally, is somewhat inaccurate, as the line only travels beneath Spadina Road for about half a mile. The name is a holdover from the planned but never completed Spadina Expressway project, of which the subway was intended to be an important component.

The expressway was conceived, circa 1959, as extending south from provincial Highway 401 to the existing Gardiner Expressway along Toronto’s waterfront. It was widely perceived as potentially having a devastating effect on the central city, comparable to that which had happened in various U.S. cities. The Toronto city council was generally opposed to the expressway, while the Metropolitan Toronto Council was an enthusiastic supporter.

Widespread and well-organized citizen protests followed. Matters came to a head in mid-1971, when Ontario Premier Bill Davis, head of the provincial government, used his authority to cancel the expressway for all time.

As one writer colorfully put it, “Bill Davis slew the heart of the highway monster.” Davis was subsequently named Transit Man of the Year by APTA.

In any event, the subway portion of the doomed expressway proceeded, and opened within seven years.

The Vaughan extension proceeds in a northwesterly direction from Sheppard Avenue West and Dufferin Street to the Vaughan Metropolitan Centre, at Jane Street and Highway 7. It is entirely underground in bored tunnel with cut-and-cover stations. The project was initiated not by the TTC, but by the cities of Vaughan and Toronto. The most important station is at York University, a major educational institution. 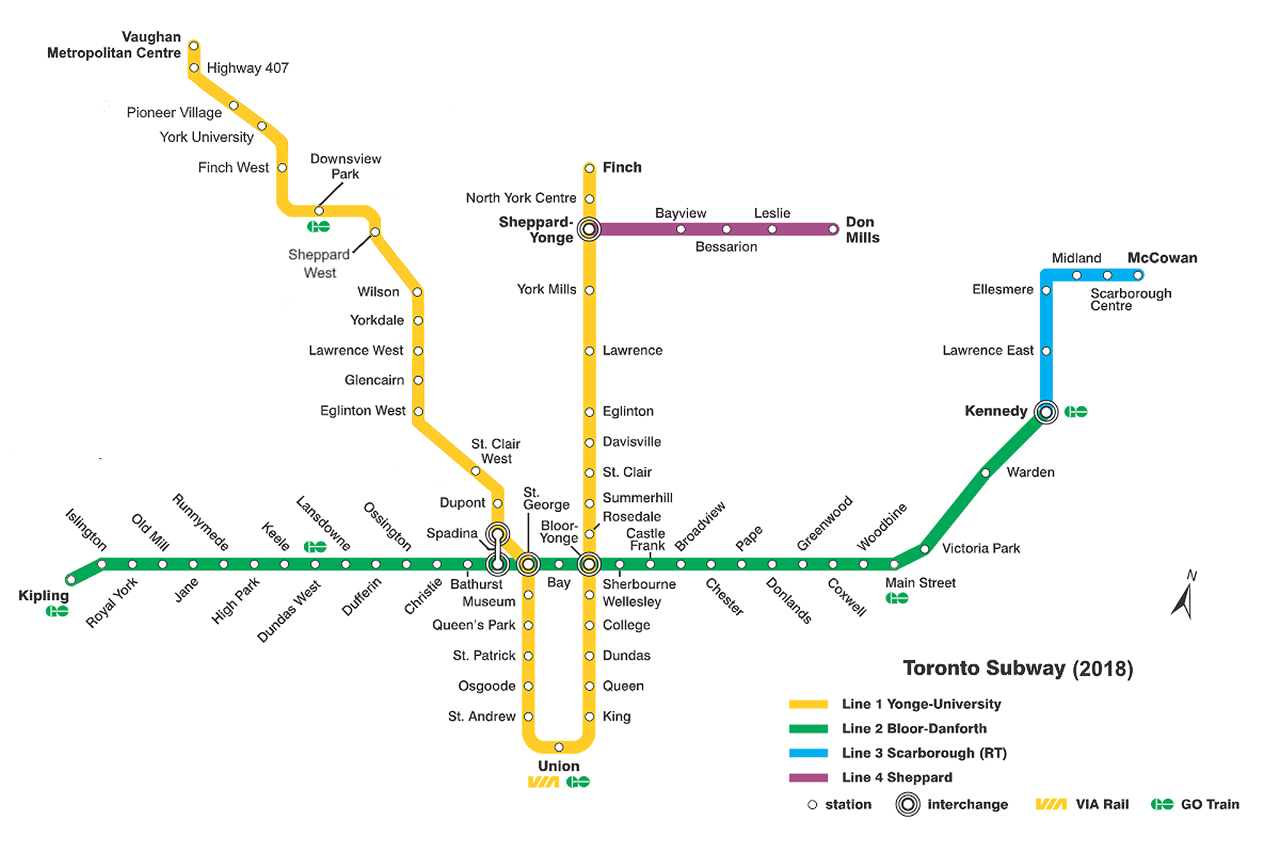 The next station up the line is Finch West, where the subway will interface with Metrolinx’s Finch West LRT, due to open in 2022. An LRT station was roughed in as part of the subway project; it line will terminate at Finch West for the time being. As a matter of interest, the LRT will be railway standard gauge (4 feet, 8-1/2 inches or 1,435 mm); the subway is “Toronto Gauge,” 4 feet 10-7/8 inches (1,495 mm).

Highway 407 station is something of a first, as it is planned as a catchment for motorists on this east-west toll road, although feeder buses are also provided, as is the case at other stations.

In common with other TTC subway lines, the “floating slab” track construction technique was used. The rails are fastened to individual, continuous concrete slabs with insulating rubber pads beneath the rails to reduce noise and vibration. The slabs, in turn, are separated from the tunnel invert by additional pads, reminiscent of oversized hockey pucks. The TTC’s standard rail, 115 pounds per yard, is used for main line running.

The Vaughan extension is the first part of the TTC subway to feature CBTC (communications-based train control) and driver-assisted ATC (automatic train control) between Sheppard West and Vaughan Metropolitan Centre stations. The technology, Alstom’s Urbalis 400, is moving-block, which allows closer spacing of trains. It will gradually be extended to the rest of the system.

Problems plagued the Vaughan extension project throughout much of its nine-year construction period. The death of a worker at the York University station site caused a lengthy work shutdown while the accident was investigated. Harsh winter weather caused further delays.

Contractors had difficulty hiring enough skilled workers, due to the booming construction situation in the Greater Toronto Area. Other challenges included frequently changing design plans for the stations, which overall are quite elaborate. Individual architects designed each stationy, with the goal of creating showplaces.

In January 2016, the TTC announced that it needed C$400 million to cover contractors’ claims. Some of these were considered to lack merit, would be contested by the Commission, and settled through litigation.

The TTC launched a $10 million breach-of-contract lawsuit against the engineering firm contracted to oversea construction at the Vaughan Metropolitan Centre station. It was alleged that the contractor failed to meet building and electric codes for the site, did not use skilled and competent staff, and did not meet the schedule.

The Commission also terminated two of its own construction managers assigned to the project. The firm of Bechtel Canada was subsequently hired to provide project management.

The Vaughan extension was ultimately, as noted earlier, opened more than one year behind schedule, and far over budget. The original cost estimate of C$2.6 billion had escalated to an estimated C$3.18 billion. The cost is being among the Province of Ontario, the Government of Canada, the City of Toronto and the City of Vaughan (in which the northern portion of the line is located).

Patronage of the Vaughan extension, especially north of York University station, is unlikely to reach significant levels until, and unless, significant development occurs near stations such as Vaughan Metropolitan Centre and Finch West. High-density development is unlikely at the other stations, due to the areas in which they are located. In short, it may be some time before ridership levels reach the extension’s full potential.

The new stations offer commuter parking, and bus routes have been realigned to serve them. The Downsview station is adjacent to a station on GO Transit’s Barrie rail line, while Finch West will benefit from the Finch West LRT when it opens in 2022. A station was “roughed in” for the LRT there, which will be the eastern terminus of the line. 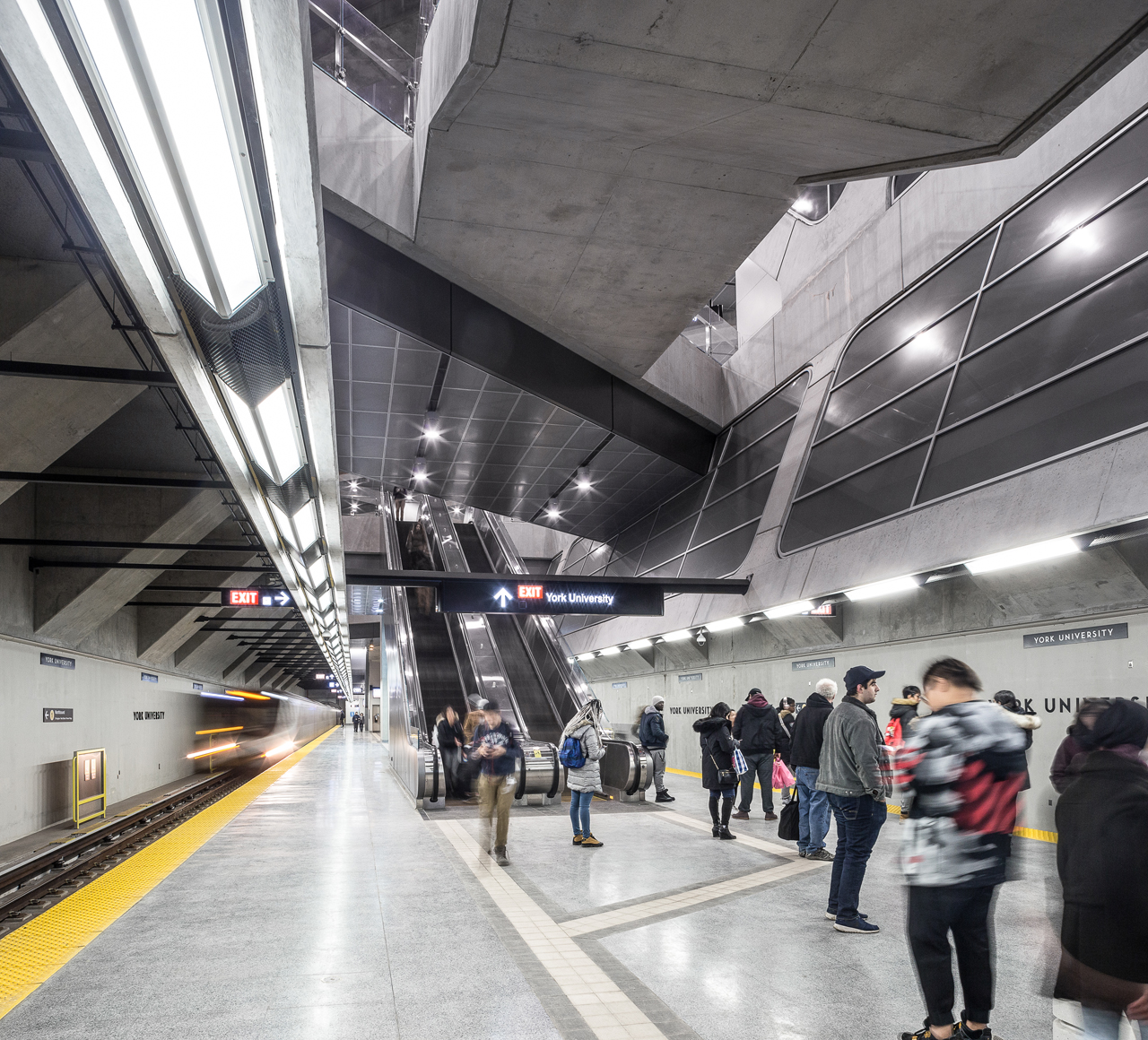 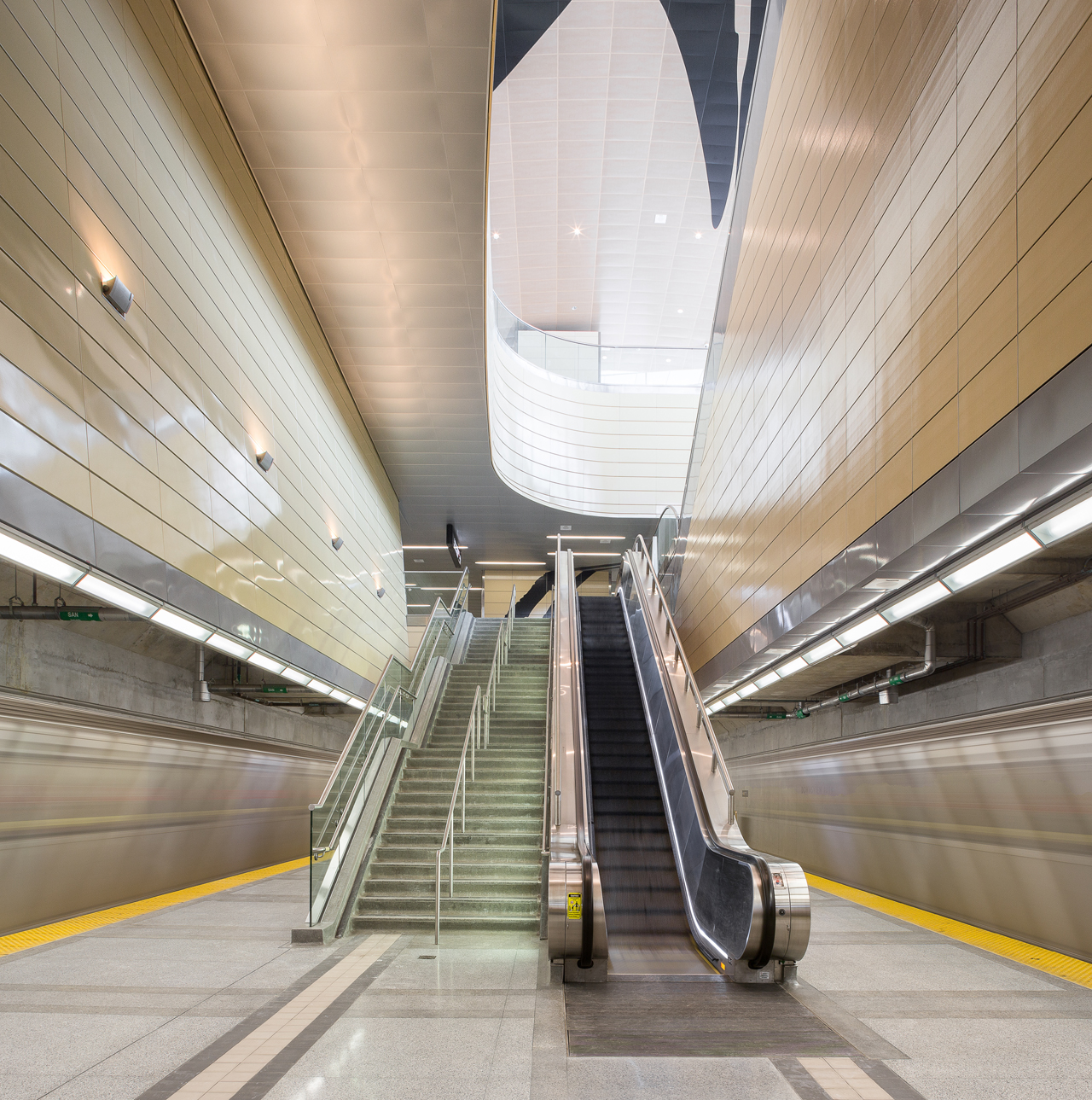