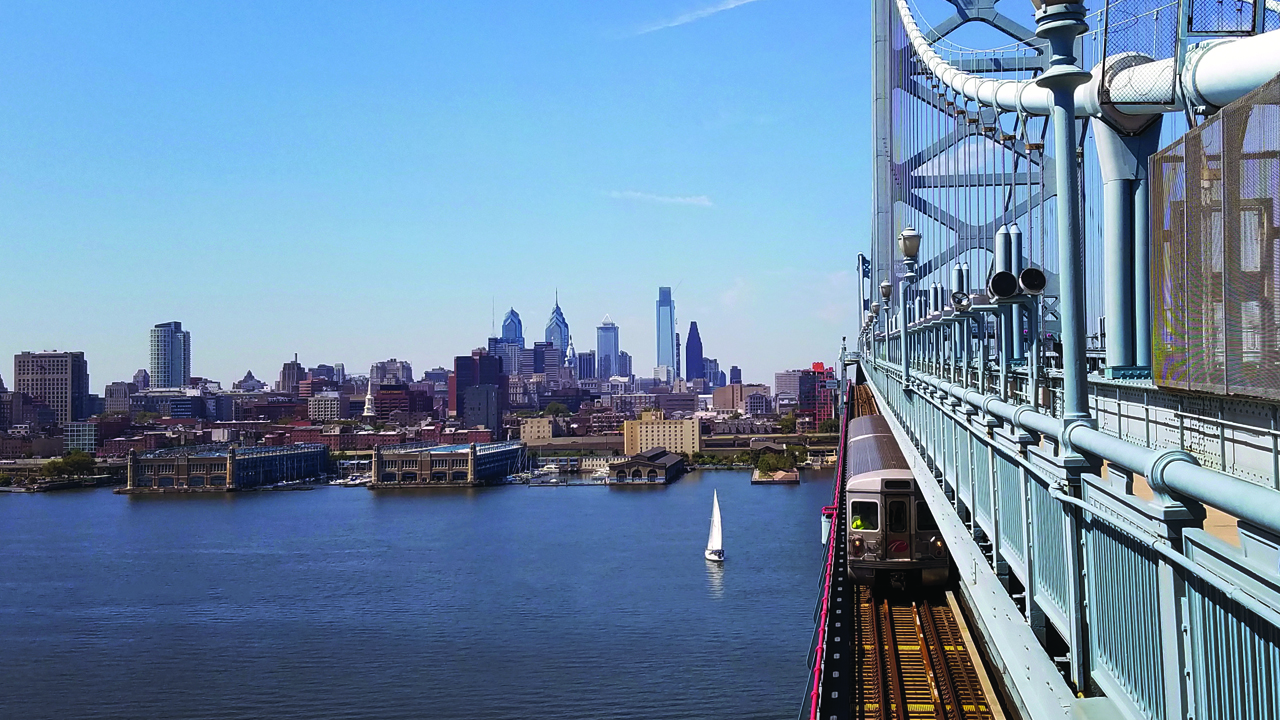 It’s not much like the high-speed rail lines in Europe, Japan, and China, but locals still refer to it as the “PATCO Speedline” and have done so for the past 50 years. It travels its 14.2-mile route in 27 minutes, which averages slightly less than 32 miles per hour—not bad for local rail transit.

The Port Authority Transit Corporation (PATCO)—a subsidiary of the Delaware River Port Authority (DRPA), a bi-state agency headquartered in Camden, NJ—celebrated a half-century of service between Philadelphia and South Jersey on the morning of February 15. Ironically, or fittingly, about 50 people were in attendance. About half were PATCO managers/employees or local elected officials who came to pay tribute to the line and its positive effect on their communities. The rest included local riders and some seniors who shared their memories about the early days of PATCO on the Speedline.

PATCO General Manager John D. Rink praised the line, saying, “For 50 years we’ve connected people” with 500 million rides. He added that PATCO service has resulted in 8 million fewer automobiles on the road and a savings of $2 billion in costs for unnecessary capacity. DRPA spokesperson Mike Williams echoed Rink’s theme: “PATCO connects communities. For more than 50 years the line has connected people to the cultural, educational, economic, and medical resources in the Philadelphia and Camden metropolitan areas.” Jeffrey L. Nash, a Camden attorney and Vice Chair of the DRPA Board of Commissioners, said that PATCO carries 40,000 riders every day, and that “the one constant is that PATCO is reliable.”

The schedule supports Nash’s statement. PATCO employees gave attendees reproductions of the original 1969 schedule as a souvenir. At that time, trains ran every 12 minutes from morning peak until slightly after 9 p.m. every day, with hourly service through the night. Most weekday service still runs on 12-minute headways today, less in the evening, and every 45 minutes through the night. Trains run every 15 minutes on Saturdays and every 20 minutes on Sundays today, but PATCO is the only metropolitan-style rail line in the Philadelphia area that runs all night, every night. PATCO also brought some technical “firsts” to the transit industry: It was the first line equipped with Automatic Train Control, and it was the first to introduce fully automated fare collection using magnetic fare cards.

Thomas R. Hickey, PATCO General Manager for 18 months in 2001-02 and now Chief Development Officer for Virginia Railway Express (VRE, which operates commuter trains between northern Virginia and Washington, D.C.), expressed a slightly different view. “We were actually the first to get those features right,” he told this writer. Hickey mentioned earlier experiments with automatic operation on the shuttle between Times Square and Grand Central Station in New York, and with magnetic fare cards on the Illinois Central Electric in Chicago, which is now part of Metra. Regarding his own tenure as General Manager, Hickey said, “PATCO was just getting into middle age at the time” and added that decisions made during that era continue to influence PATCO today—especially the decision to keep and overhaul the original Budd cars. Hickey also said that “it was great to see everybody from the early and intermediate years collected for the event.”

The line runs from 16th and Locust Streets in Center City, Philadelphia, to Lindenwold Station in South Jersey. It began with 12 stations, four in Philadelphia and the other eight in New Jersey. The celebration was held at Woodcrest, the only infill station on the line, which was added in 1980. The former station serving Franklin Square, a popular park in the northeast quadrant of Center City, was not part of the original line, having closed before PATCO began service. It was reopened briefly under PATCO in the 1970s, and officials now plan to reopen it permanently in 2022.

The original Delaware River Bridge, built in 1926 and also operated by DRPA as the Ben Franklin Bridge today, was designed for two heavy-rail tracks, which PATCO uses, and two trolley tracks. It would be 10 years before trains ran over the bridge; the Delaware River Joint Commission, a DRPA predecessor, began operations on June 6, 1936, between 8th and Market Streets in Philadelphia and Broadway in Camden. The latter station is now adjacent to New Jersey Transit’s Walter Rand Transportation Center, which serves the River Line diesel light rail between downtown Camden and Trenton, as well as the company’s extensive bus network between South Jersey and Philadelphia.

The original rail service was operated by the Philadelphia Rapid Transit Company (PRT) and later the Philadelphia Transit Company (PTC), both predecessors to today’s SEPTA. At that time, the “bridge trains” were integrated into the Broad Street Subway’s Broad-Ridge Spur, which SEPTA still operates. The line was extended to 15/16th & Locust in 1953. The original “bridge cars” (which have also been called “Flash Gordon cars”) were built by Philadelphia manufacturer J.G. Brill and ran until the old operation ended on Dec. 28, 1968. A few of those cars still exist today, but none are operational.

Some of the attendees at the celebration were the line’s earliest riders and managers. J. William Vigrass started with PATCO in August 1968 as the original Supervisor of Traffic and Planning in charge of fare collection and stations. He remembered, “I took part in planning for operations. In particular, the nation’s first unattended self-service fare collection system.” Vigrass also recalled participating in the transition from subway-type signals to railroad-style cab signals that allowed operation at 75 mph. According to Vigrass, PATCO operation began on Saturday, January 4, 1969, on the New Jersey side, between City Hall Station in Camden and Kirkwood Station, which the mayor of the Borough of Lindenwold later ordered renamed after his town. Trains ran a 16-hour service day, which ended at 10 p.m., to allow time for completion of track and signal work.

Full service to Philadelphia began on Saturday, February 15, 1969. Vigrass said that the line carried 18,000 riders on its first business day, Monday, February 17 (before Presidents Day was initiated). Philadelphia resident Jerry S. Silverman was the first “official” rider on the line, and was honored for that status at the ceremony. Silverman remembered being matched up with some college students, so he could ride the first train, to get a ride to Lindenwold, scheduled to leave at 6 that morning.

Silverman told this writer that there were no free rides offered on the first day of service, but PATCO did offer special fares on the morning of its 50th anniversary. For five hours, beginning at 6 a.m., the fare machines were programmed to offer “Flashback Fares” of $.30 within Philadelphia or between the city and Broadway Station in Camden; $.40 within New Jersey; and a maximum of $.60 from end to end. Those were the original 1969 fares; today’s fares are $1.40, $1.60, and $3, respectively.

The rider in line behind Silverman to board the first train was longtime advocate Jeffrey B. Marinoff—a member of New Jersey Transit’s South Jersey Transportation Advisory Committee—who was also recognized at the event and given the honor of cutting the ceremonial cake that was served to attendees. Marinoff told this writer that he sat in the front seat of the first train and documented the entire trip on film. He remembered the old service and had ridden the last train over the bridge with the old Brill cars. He added that the old service ended “with a blank wall at City Hall Station” in Camden.

Marinoff also remembered creating a stir at the ceremony that marked the opening of the Bay Area Rapid Transit (BART) line between San Francisco and the East Bay several years later. A BART official had said that the line was the first semi-automated transit system in the nation, but Marinoff had reminded some reporters that PATCO was actually the first such system. More recently, Marinoff fought for such improvements on NJ Transit as the River Line Light Rail and the return of the Atlantic City Rail Line, which ran until 1983, came back from 1989 until Sept. 4, 2018, and is now suspended. He noted that PATCO “fares have gone up dramatically” over the years, but the schedule has not changed much since the early days.

The PATCO Line is elevated for most of its run east of downtown Camden and the stations in that area are mostly park-and-ride facilities. NJ Transit runs buses in the territory, too, and some of them connect with PATCO, like the #554 route between Lindenwold and Atlantic City, which now provides most of the transit between that city and Philadelphia, in connection with PATCO. When PATCO opened, Lindenwold was the connection point for limited service on the old Pennsylvania-Reading Seashore Lines (PRSL) to Atlantic City, with one weekday commuter train to Ocean City and Cape May as well. All of that service was gone by the early 1980s. Today, there are again no trains to Atlantic City, and Lindenwold Station again serves only as a connection for buses going east. Local residents want their trains back, but NJ Transit management has moved the restoration date back three times, from the original “first of this year” to sometime in the “second quarter.” Local residents and advocates elsewhere view that span of time to mean June 30, and some fear and expect a further postponement. NJ Transit announced on Feb. 27 that service would return to the line on May 24, the Friday before Memorial Day. Some riders and their advocates may remain skeptical, but all of them hope that the agency will keep its word.

In the meantime, the PATCO Line continues to provide service with the original 1969-vintage cars built by the Budd Company and recently overhauled by Alstom in the historic former Erie Railroad shops in Hornell, N.Y. Hickey specifically praised the appearance of the original cars and the legacy of the Budd Company, which built them. He remembered having engineers inspect them carefully, and there were no cracks, so he kept them. He said that he expects the recent overhaul to give them another 30 years of use. Similarly, some advocates have called for other equipment from that era to be refurbished and to continue in service. That includes NJ Transit’s Arrow III cars, which General Electric built in the late 1970s, and which ABB Traction refurbished in 1993.

Williams summed up the line‘s innovations over the past 50 years, saying, “In 1969, PATCO was one of the new and modern generations of mass transportation with automatic train control and automatic fare collection. PATCO’s innovation continues today with a solar energy project that is expected to provide more than 50% of PATCO’s energy consumption through solar energy.”

As they have for more than a half-century, PATCO riders continue to take the train under Locust Street in Philadelphia, across the bridge, under downtown Camden, and further east on a 1969-vintage elevated line with semi-automatic operation and riding recently refurbished 1969-vintage equipment. They have been doing so 24 hours a day for the past 50 years, which, in itself, is something to celebrate. 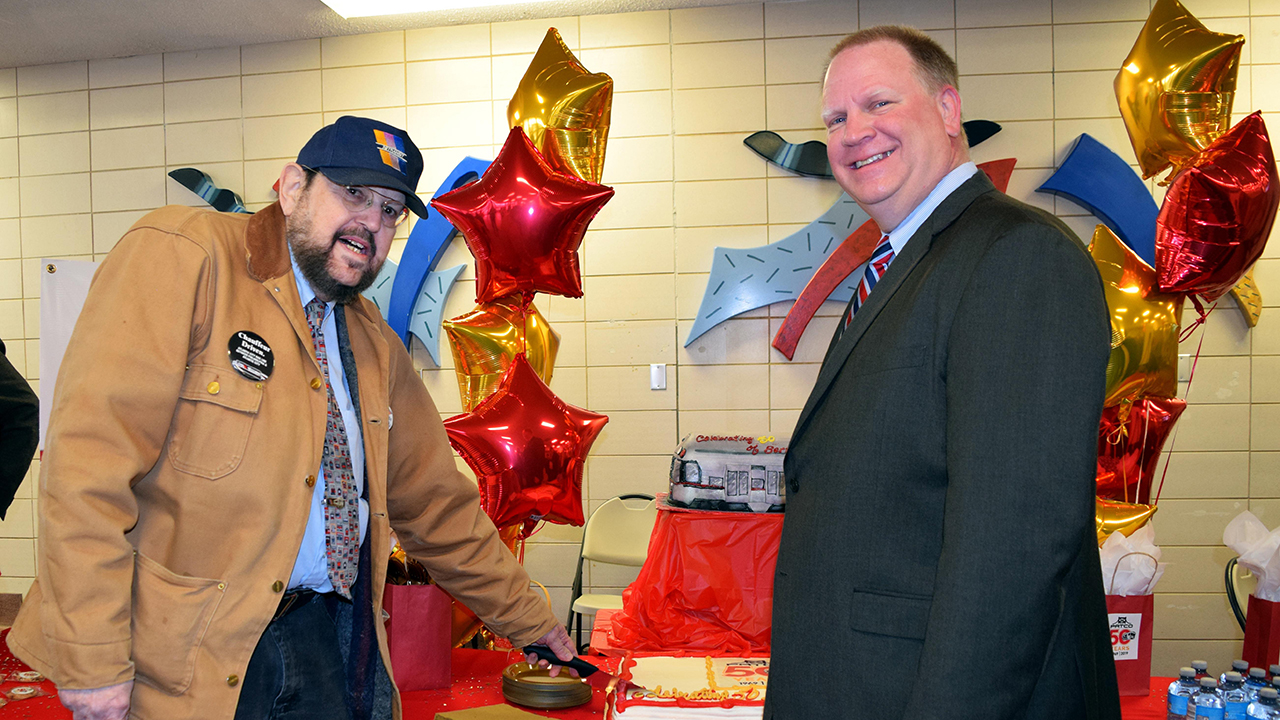