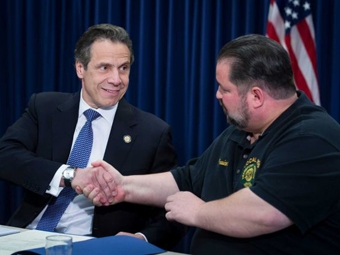 Under the terms of the agreement, TWU workers would receive increases within the 2% cap that New York State has achieved with state labor contracts (1% increase in each of the first 2 years, beginning with 2012, and 2% increases in the last 3 years). Employees would pay an increased share of health care costs—increasing from 1.5% to 2% of the employee’s salary—but would receive new benefits including paid maternity/paternity leave, coverage of health care for surviving spouses of deceased TWU retirees, and improvements to dental and optical benefits.

The MTA said the “fair and reasonable” contract will have no impact on MTA fares and will be accommodated within revisions to the MTA financial plan.

The tentative agreement, which is subject to approval by the TWU Local 100 executive board and ratification by the membership, and subsequent approval by the MTA board, was jointly announced by MTA Chairman Tom Prendergast, TWU Local 100 President John Samuelsen, and New York Governor Andrew Cuomo.

“Once again over the course of Governor Cuomo’s three years in office, he has provided timely support to the MTA, this time helping to finalize a fair and responsible contract, just as he has given us consistent increases in the MTA operating budget,” Prendergast said. “The MTA’s finances are always our foremost concern, and this contract is a responsible one that acknowledges and reflects the MTA’s budget and projected budgets. I thank John Samuelsen, the leader of TWU Local 100, and a longtime colleague of mine at the MTA, for his partnership throughout this process.”

“This is a fair and equitable contract for transit workers,” Samuelsen said. “The agreement secures raises in every year of the contract, with full retroactive pay and provides for historic paid maternity and paternity leave, as well as important improvements to our membership’s healthcare, dental, and eye benefit package. The MTA is a vital part of this city and I am pleased to present a contract to the membership that recognizes their hard work, dedication, and service. I commend the hand of partnership extended by Governor Cuomo and I appreciate his leadership in helping bridge the divide and bring us to this contract agreement.”

“The transit system is the lifeblood of New York City, and the MTA employees are the ones that make the system work,” Governor Cuomo said. “They showed their dedication time and time again during Superstorm Sandy and its aftermath, working in difficult conditions to get the system up and running in record time. The resolution of this contract dispute is fair to transit workers, fiscally responsible for the MTA, and will have no impact on fares. I thank President John Samuelsen, who fights tenaciously for his members but also cares deeply about the system and its ridership, and Tom Prendergast, whose lifelong dedication to the transit system made him the ideal leader of the MTA.”