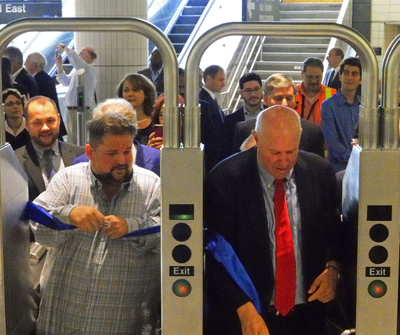 The long-awaited, long-overdue extension of MTA New York City Transit’s extension of the No. 7 subway line to Manhattan’s far west side opened to the public on Sept. 13, 2015. It is the first new line on New York’s system in 20 years.

The City of New York funded the $2.42 billion, 1.5-mile extension of the No. 7 line from its present terminus at Times Square to a new station at 34th Street and 11th Avenue, at the under-development Hudson Yards neighborhood. City funding included $2.1 billion for the station and tunnels in addition to $266 million for other non-subway related infrastructure work. Hudson Yards is a 28-acre, $20 billion commercial, retail, residential and recreational development being built on top of the Long Island Rail Road John D. Caemmerer West Side Yard. The extension of the No. 7 line also allows connections to 18 other subway lines.

WSP | Parsons Brinckerhoff—whose founder, legendary civil engineer William Barclay Parsons, was Chief Engineer of the New York Rapid Transit Commission and led the design and construction of city’s first subway line, the Interborough Rapid Transit (IRT), in 1904—was an integral part of the No. 7 project. 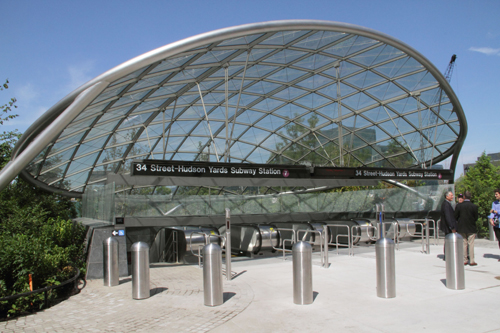 “We are proud to have played a key role in planning and designing a project that will have such a transformative impact on New York City,” noted WSP | Parsons Brinckerhoff President and CEO Gregory Kelly. “While extending much-needed transit service to Manhattan’s far west side, the No. 7 line extension has also been the catalyst for the establishment of an exciting new neighborhood with the Hudson Yards redevelopment, creating millions of square feet of office, residential and retail space. Following our transportation sector’s pivotal role in the extension of the No. 7 subway line, our buildings practice continues to make a major impact on Hudson Yards with its engineering expertise.”

Arup, a multidisciplinary engineering and consulting firm, Arup served as tunnel design engineer for S3 II Tunnel Constructors (a joint venture of JF Shea, Schiavone, and Skanska) in the construction of the station caverns and as engineer-of-record for the CCA-Halmar International Joint Venture on the ventilation systems.

S3 II engaged Arup for final design of the initial ground support and the construction sequence design of all drill-and-blast excavations. This phase of the project involved the first large rock cavern to be excavated in Manhattan in 40 years. Arup’s work included three 40- to 50-foot diameter rock shafts, a tunnel boring machine (TBM) assembly chamber, a pair of TBM starter and tail tunnels, a TBM reception chamber, five cross passages, two interlocking caverns and the approximately 1,000- x 60- x 70-foot 34th Street Station cavern. Integral to the success of the project was the knowledge Arup identified the limitations and opportunities presented by the ground conditions and the proposed excavation methods, as well as the contractual arrangements.

In both contract roles, the collaborative approach between Arup and the contractors “led to great success during excavation, where teams employed a rapidly buildable and adaptable construction sequence and initial ground support scheme,” the company said. “Both contracts were delivered ahead of schedule and below budget.”