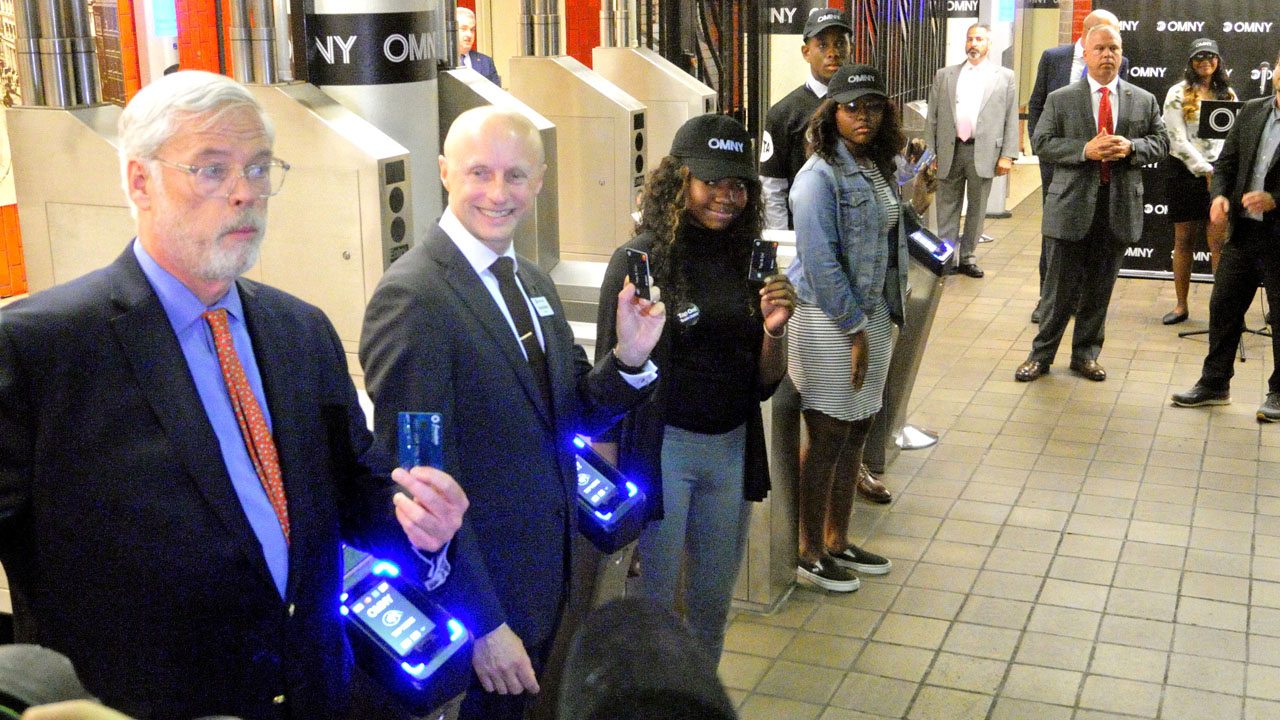 More than 25 years after it began transitioning its fare payment system from traditional metal tokens to the MetroCard, the New York Metropolitan Transportation Authority (MTA) has launched OMNY, its new contactless smartcard system, with a pilot program on the New York City Transit (NYCT) Lexington Avenue (4-5-6) subway and buses on Staten Island. The public pilot kicked off May 31 at the Bowling Green station in Lower Manhattan.

OMNY, which enables riders to pay fares with digital wallets and contactless credit and debit cards, is developed by Cubic Transportation Systems, which supplied the MetroCard farecard technology beginning in 1993. It is “a first-of-its-kind system that lets riders pay their fare and enter the subway or bus by simply tapping contactless credit, debit, and reloadable prepaid cards, mobile phones, smart watches and other wearable devices,” MTA said. “OMNY will eventually provide a seamless payment system across the MTA’s subways, buses, and two commuter railroads,” the Long Island Rail Road and Metro-North. It is an “open loop” contactless payment system, meaning customers “never need to wait in line to buy a farecard.”

The public pilot phase of the rollout brings OMNY contactless payments to all subway station entrances on Lexington Avenue Lines between Grand Central-42nd Street and Atlantic Avenue-Barclays Center and all MTA buses on Staten Island. Initially, OMNY will support only a full-fare, pay-per-ride option until all subway stations and bus routes are equipped with the new technology. Customers have the ability to access their trip history by registering for an OMNY account at omny.info.

MTA said the OMNY rollout, which runs through the end of 2019, “will allow the us to ensure that all systems are fully functional and that any issues are identified and improved upon prior to continuing the rollout of OMNY readers to the rest of the system. Completion of the entire OMNY project in 2023 will empower customers to choose how, when and where they pay for their fares. OMNY will provide more robust customer service, including a new OMNY app that will provide seamless fare payment among the LIRR, Metro-North, subway and bus services, as well as the introduction of the OMNY card to support customers who prefer to fund fares with cash. Eventually, the system will accommodate the migration of all current unlimited ride pass and other special fare products over to the OMNY environment and the option to purchase fare products online or in stations and new machines A closed-loop OMNY card will be sold in stations at a robust network of retail stores beginning in 2021, so cash will always be an option.”

During the MTA’s rollout of OMNY contactless readers and continued expansion of OMNY services between 2019 and 2023, riders can still use MetroCard and eTix. OMNY readers accept contactless cards from Visa, Mastercard, American Express, and eventually Discover Card as well as Apple Pay, Google Pay, Samsung Pay and Fitbit.

All remaining NYCT bus routes and subway stations and Staten Island Railway locations will be equipped with OMNY by late 2020. OMNY is expected to be enabled for LIRR and Metro-North by early 2021. Between 2021 and 2023, the MTA will support all remaining fare options, introduce the OMNY Card in retail locations throughout the New York region, and install new vending machines at locations throughout the system. The MetroCard is expected to be gone by 2023, when the OMNY project is completed.

“The significance of moving to a modern fare payment system cannot be overstated,” said NYCT President Andy Byford. “Eventually, OMNY will help ease congestion in the system, reduce a host of technical problems associated with the MetroCard, and make our system easier and more intuitive for the tens of millions of New Yorkers and tourists who ride with the MTA each year. I’m eager to continue rolling out this easy-to-use technology to all remaining subway stations and bus routes in the next 18 months.”