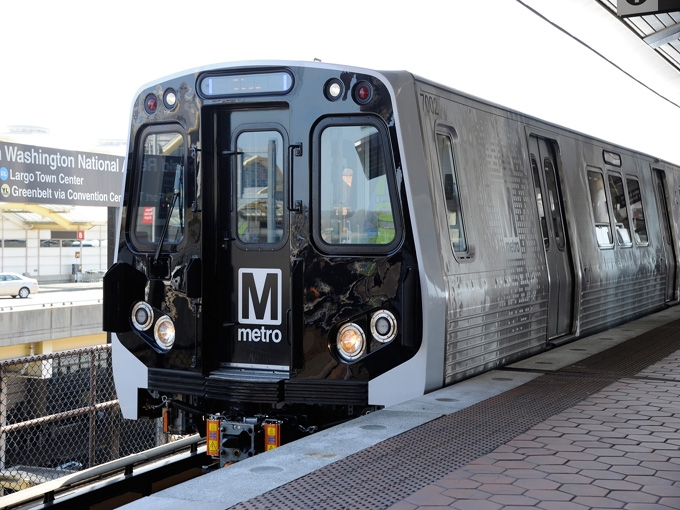 When it opened on March 27, 1976 to great fanfare, the Washington Metro was one of the most advanced, beautifully planned and designed passenger rail systems in the world. Today, approaching its 40th anniversary, the nation’s second-busiest rapid transit system (with an average weekday ridership of close to 750,000, second only to New York City Transit), Metrorail, operated by the Washington Metropolitan Area Transit Authority (WMATA), has been undergoing a comprehensive upgrade and expansion program.

Among Metrorail’s most critical upgrades is its $1 billion fleet of new 7000-series rapid transit cars, supplied by Kawasaki Rail Car USA. The first trainset debuted on WMATA’s Blue Line on April 14 and is currently the only one in service. Deputy General Manager-Operations Rob Troup says a second set is scheduled for revenue service by early summer.

WMATA has ordered 528 of the new railcars, enough to replace all 1000- and 4000- series cars and expand the size of its fleet by 128 cars. The 128 additional cars will support the full build-out of its $5 billion Silver Line expansion.

WMATA placed an initial $886 million order in 2010 for 428 7000-series cars, and the first pre-series train began trials on the Metrorail network in January 2014. Around 300 of these vehicles will replace the oldest cars, the original Rohr Industries-built 1000-series (which following a fatal June 2009 collision on the Red Line, the National Transportation Safety Board deemed as unable to protect passengers in a crash), while the remainder will be used on the Silver Line to Washington Dulles International Airport and Ashburn. A $184 million option for 100 additional cars was exercised in May 2013 to replace the problematic Breda 4000-series vehicles, which date back to the mid-1990s.

The stainless-steel-bodied 7000-series cars feature new technologies “that are generations ahead of WMATA’s current railcars,” all of which were designed to be backward compatible with WMATA’s oldest cars, the 1000-series, WMATA says. For example, WMATA’s current railcars use analog technology for onboard public address announcements, whereas the P.A. systems on 7000-series cars will be entirely digital and feature “clear, automated announcements.” The 7000-series are different from previous models in that while still operating as married pairs, the cab in one car can be removed, essentially turning it into a B car. The new design, WMATA says, “allows for increased passenger capacity, elimination of redundant equipment, greater energy efficiency and lower maintenance costs.”

Construction on the second phase of the Silver Line expansion project recently began. This phase picks up at the Phase 1 terminus location, Wiehle-Reston East, and then continues in the median of the Dulles Toll Road and the Dulles Access Highway with three stations. It also includes an aerial station at Dulles Airport and continues on with two stops in Loudoun County. Completion is slated for 2018.

WMATA is also considering constructing the Potomac Yard Metrorail Station, which would be located along the existing Metrorail Blue and Yellow Lines between the Reagan Washington National Airport Station and the Braddock Road Metrorail Station. The project would include a new Metrorail station, associated track improvements, and pedestrian bridges. WMATA says the new station would be its second “infill” station, or a new station constructed between two existing stations, since the completion of NoMa-Gallaudet U Station in 2004. The Metro Board of Directors and Finance and Administration Committee will consider approval of a public hearing regarding the new station.

In January 2015, WMATA elected transportation veteran Mortimer L. Downey III as Chair of the Board of Directors, succeeding Thomas M. Downs. Also in January, Richard Sarles stepped down as WMATA’s General Manager/CEO, prompting the agency to launch a nationwide search for a successor. Jack Requa, Assistant General Manager for Bus Services, has been serving as interim General Manager/CEO since January.

This past March, as part of its commitment to “enhance public confidence in Metro’s effectiveness, and ability to serve the region and its customers as a high performing public agency,” Chairman Downey said that the Board will open a broader dialog around what is needed in considering future candidates for the General Manager/CEO position.

With respect to leadership transition, Downey said that the Board is “urging the compact jurisdictions to move forward quickly to fill vacancies on the Metro Board of Directors, and to make and confirm any pending Board appointments.”

Downey added that the Board is directing management to produce a rail fleet plan and analysis that support regional discussion of how and when new railcars will be utilized, should the Board fund the purchase of up to 220 additional cars by exercising favorable pricing options that expire this summer. Such an analysis, he said, will inform decision makers, funders, and customers about the railcar purchase options.

Following years of signal upgrades, independent testing and the completion of key NTSB safety recommendations, WMATA returned the Red Line to automatic train operation (ATO) in April. Eight-car trains will run in automatic mode initially; six-car trains will continue to operate in manual mode. A future software upgrade on WMATA’s existing railcar fleet will allow six-car trains to return to automatic mode at a later date. The five other rail lines (Orange, Silver, Blue, Yellow and Green) are currently undergoing track-circuit module replacement projects and a return to ATO on these lines is expected in late 2017.

Troup, and Deputy Chief Engineer-ATO Nick Croce, say the return to ATO involved “a very comprehensive look at WMATA’s organizational structure, plus a full safety analysis and audit of our maintenance practices.” A loss of shunt condition (which caused an occupied track circuit to appear unoccupied) was among the main contributing factors to the 2009 Red Line accident at Fort Totten, which forced the entire Metrorail operation into manual mode. Relay-based signal and train control logic is now being replaced with vital and non-vital microprocessor technology; one benefit is loss of shunt detection. Older Generation I and II track circuits are being replaced with Alstom Generation III and IV and Ansaldo AF800W audio-frequency-based equipment.

Currently, WMATA has no plans to migrate to CBTC. According to Troup and Croce, the cost of CBTC “would take away from other capital priorities.” Given Metrorail’s current “very efficient” track circuits—no insulated joints except at interlockings—CBTC “would do nothing to improve turnout throw speeds and possibly force hard stops at interlockings,” which would compromise system capacity and train throughput. As well, CBTC’s lack of broken rail protection “remains a concern.”

In July, WMATA awarded an $8 million contract to Cubic Transportation Systems to convert its paper magnetic farecard vending machines to sales and reload devices for SmartTrip, the contactless smartcard for the Washington Metro. The project is part of WMATA’s plan to eliminate paper ticketing from its fare system and convert to all-contactless media by spring 2016.