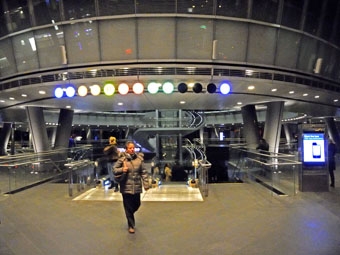 Amid myriad ongoing rail project work in New York's five boroughs, four subway programs in Manhattan signify the ups and downs of adjusting and growing a century-old system for the second 100 years.

In the city that never sleeps, rail transit developments nevertheless remain largely unnoticed, mostly because so much of it is underground. So the opening last November of lower Manhattan’s Fulton Center was critical progress on several levels, including a physical presence that, at least in part, was visible for New Yorkers to actually see at street level.

Fulton Center (seen above) also doubles almost as a talisman, a psychological lift and sign that New York, after pausing for nearly a half century, is once again addressing and growing its vital subway system—not anywhere near rivaling Beijing or other Chinese cities, and not expanding with the robust visibility of cross-continental rival Los Angeles, but growing all the same, and with growing ridership as well, on some days now exceeding 6 million subway passengers.

The impetus for such rail progress is at least threefold: a civic-pride need for Manhattan to retain its “world-class” status in the 21st century; a civic yearning, bolstered by federal funding, to recover from the scars visited by 9/11; and a coldly analytical reaction to the looming threat of climate change and its potential impact on New York Harbor, highlighted by the very real damage visited upon the Northeast by SuperStorm Sandy in October 2012.

The $1.4 billion Fulton Center’s opening streamlines customer access to and from nine (soon to be 11) subway lines. And the debut of the related Dey Street Passageway, which also opened last November and is often ignored by the media, will offer pedestrians underground access to and from the nearby PATH World Trade Center station—in effect giving New Yorkers weather-sheltered access halfway across Manhattan’s downtown, from the Hudson River to past Broadway, and including numerous skyscrapers old and new in the process.

That opening, so far deemed successful (Railway Age staff uses the station fairly often), also allowed the Metropolitan Transportation Authority (MTA) to reset its “completed checklist” at one, after flooding by SuperStorm Sandy essentially erased MTA’s $530 million completion in 2009 of the nearby new and improved South Ferry Station, offering improved underground connectivity among three subway lines and improved access to Staten Island Ferry service (operated by the New York City Department of Transportation). MTA will try again to establish the undone station, this time using various technologies to harden the station (and others) against flooding, in an attempt to reopen the upgraded site by 2018.

South Ferry Station is the most vulnerable of at least 10 flood prone subway stations, most in Brooklyn and Queens, being addressed by architectural firm di Domenico + Partners; the firm’s newest effort will include “all concourse, mezzanine, and platform levels, employee facilities and back-of-house spaces, as well as mechanical and electrical rooms throughout the station complex,” a company spokeswoman says. “For flood protection and resiliency, the assessment focused on street level entrances, ventilation structure, hatches, manholes and critical spaces throughout the station complex. Both assessments resulted in reports documenting the conditions and recommendations for recovery, rehabilitation, and mitigation required for a Category Two hurricane.”

The assessments resulted in “alternative designs that balanced costly permanent flood mitigation with more economical components that could be deployed prior to a storm event (photos, above). These measures, while responding to current and future needs, were also an opportunity to form three new prominent (and water-proof) pavilion entrances, now under construction,” the spokeswoman says.

Seemingly a world away, five miles or so up the Hudson River in Midtown Manhattan, system expansion competes with rehabilitation far more aggressively, as two subway extension projects move forward fitfully: The No. 7 line addition reaching toward Manhattan’s “far” West Side; and the Second Avenue Subway, decades delayed but now a real thing with an optimistic December 2016 opening date for Phase 1, and a Phase 2 add-on north to 125th Street being openly discussed.

Ardently backed by former New York City Mayor Michael Bloomberg, first as a means to attract the Olympic Games and then as a transit-oriented-development (TOD) tool, the roughly 1.5-mile, $2.4 billion No. 7 extension failed to meet a December 2013 target opening, set to occur before Bloomberg’s departure from office. A debut sometime in 2015 remains in flux. Even so, the extension already has succeeded in its role as a TOD agent, as Hudson Yards construction gains speed and is significantly transforming Manhattan’s West 30s.

Whenever it opens, the No. 7 extension will be equipped with Communications-Based Train Control (CBTC), as will much of the existing line from Times Square to Flushing, Queens, courtesy of Thales Transportation, becoming the second MTA New York City Transit subway line to be so fortified after NYCT’s L (Canarsie) Line.

Over on Manhattan’s East Side, the ever-ephemeral Second Avenue Subway (SAS) is slowly but finally becoming a reality, at least in part, though since SAS first surfaced as a concept in 1929, New Yorkers remain understandably skeptical of its functional existence.

Here, unlike the No. 7, construction of the $4.45 billion, two-mile Phase 1 has been unavoidably “more intrusive,” Horodniceanu observes, since SAS will serve “the densest residential area in the country, 100,000 people per square mile.” As well, the project has had to dodge sewer lines and other existing infrastructure “outside the walls of the station” or subway tunnels, and many residents, small businesses, and property owners “had no trust” in MTA when the project’s latest push ceremonially commenced in the spring of 2007, Horodniceanu says.

Though SAS primarily utilized tunnel-boring machines, and not New York’s traditional “cut and cover” construction, fears of disruption and dirt (real and anticipated) prompted MTA Capital Construction to initiate an outreach program along the entire route, including not just casual contact with New York’s Community Boards but also “monthly meetings with building representatives, contractors, and MTA officials on what’s to come,” Horodniceanu says, with an unofficial MTA motto of “no surprises” being the goal. For him, SAS became more than just moving Manhattan schist.

“Civil engineering, he says, “is a profession that’s supposed to serve the people.” SAS Phase 1 is expected to serve 200,000 daily riders upon opening, an anticipated mix of “new” riders mixed with others opting for the new line instead of the consistently overcrowded Lexington Avenue (4, 5, and 6) East Side service.

It’s not that New Yorkers automatically will appreciate—or even notice—system improvements or expansions. But with New York’s population expected to top nine million by 2030, the four subway projects, buttressed by widespread if less spectacular work systemwide and reinforced by other MTA regional rail projects, plus other improvements—whenever they might come on line—will be needed, and used.