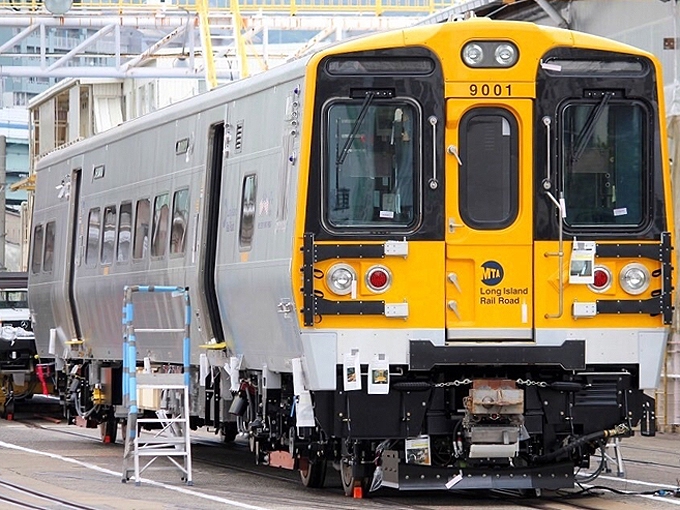 MTA Long Island Rail Road (LIRR) has issued an RFP (Request For Proposals) to prequalify firms for a minimum of 60 and up to 160 M9A married-pair (A Car – B Car) EMU (electric multiple-unit) railcars, structured as a base order with options.

These cars are tied to the FFGA (full funding grant agreement) between the LIRR and the Federal Transit Administration (FTA) for the East Side Access (ESA) project, and as such fall under a separate procurement from the contract the New York MTA awarded to Kawasaki Rail Car in 2013 for LIRR and MTA Metro-North Railroad M9 cars.

Proposals for this Phase I/Prequalification RFP process are due by Jan. 10, 2018. The M9As are intended to supplement LIRR’s EMU fleet for ESA service.

Procurement of M9 cars dates back to 2012. In mid-2012, the LIRR issued a joint procurement request for itself and Metro-North for up to 676 M9 cars. In September 2013, Kawasaki Rail Car, the builder of Metro-North’s M8 railcars, was awarded a nearly $1.8 billion contract for a base order of 92 M9 cars for the LIRR, with options for 584 cars—304 to LIRR and 280 to Metro-North. The NYMTA’s 2010-2014 Capital Plan provided funding for the base order. The M9A procurement for equipment intended to provide ESA service was deferred due to delays in the opening date for ESA.

The LIRR portion of the M9 order is currently structured as follows: 92 base order cars and 110 Option 1 cars. Six pilot cars have been delivered to TTCI in Pueblo, Colo., for testing, with an additional 2 cars to be delivered to Pueblo early next year. Pilot car testing at LIRR will commence in April 2018. Production cars are scheduled to be delivered starting in July 2018 at the rate of 12 cars/month.

The M9 cars will feature many new safety, security and customer amenity items. The cars will have closed loop seat armrests, slightly wider seats, electrical outlets on both sides of a car in each row of seats, four 32-inch multimedia screens in each car, four to six additional seats per married pair, as well as a powered B-end door. The flip seats will have suspension systems so they don’t slam. To enable passengers to know which car they are occupying in the train consist, there will be a display indicating the position of each car in a 10-car trainset (for example, “Car 8 of 10”). At the front of the trainset, there will be exterior destination signs that are visible as the train approaches a station. The cars will have CCTV cameras. In addition to the safety, security and customer amenities listed above, the M9A cars will have USB ports installed in each A/C electrical outlet, as well as powered bathroom doors, and scratch resistant side windows that do not haze, fade or crystallize.