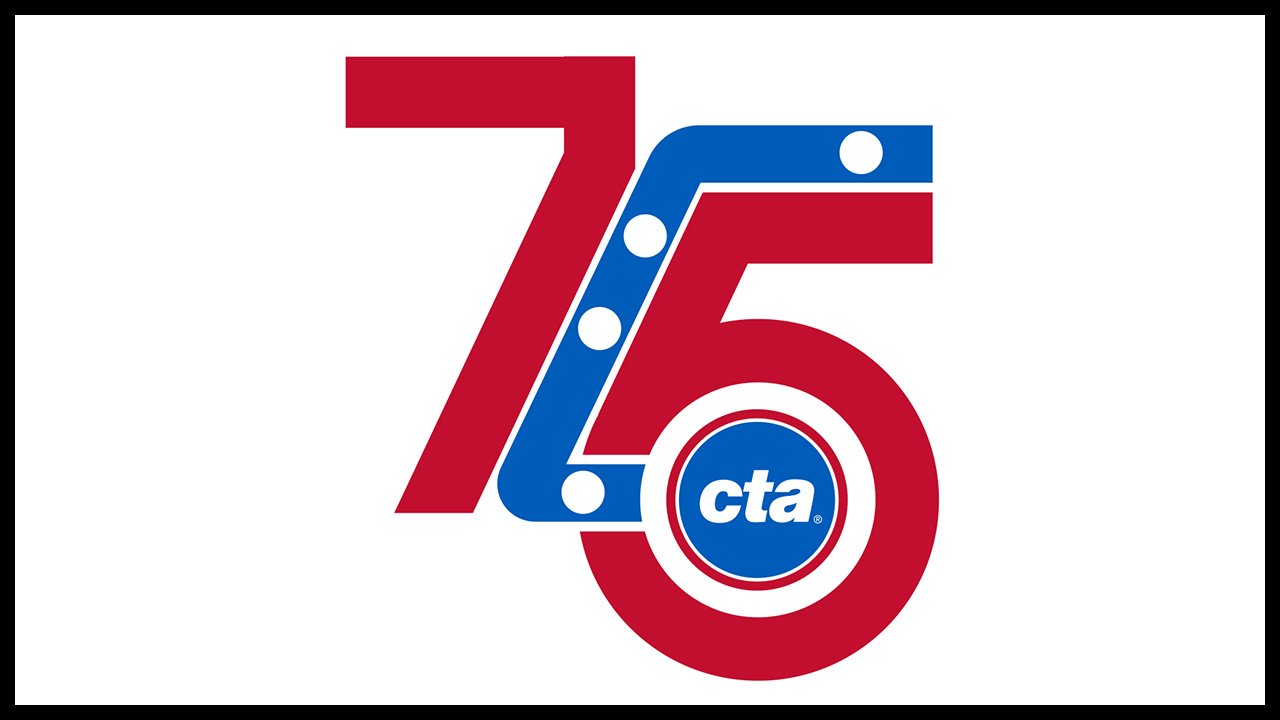 There is a big day planned in Chicago on Saturday, Oct. 1. That is the day the Chicago Transit Authority (CTA) will celebrate its 75th anniversary.

“For 75 years, our dedicated, hard-working employees have kept CTA on track in providing the most equitable, accessible and affordable public transportation in the country,” said CTA President Dorval R. Carter, Jr. “This is a milestone worth celebrating, and we have both entertaining and engaging anniversary activities planned for our customers.”

There aren’t too many details yet about the upcoming celebration, aside from “commemorative pins and posters (above), to famous Chicagoans sharing their CTA memories on our social media channels, to CTA trains wrapped in vintage designs from yesteryear … On Oct. 1, the public can ride around the Loop aboard CTA’s actual Heritage Fleet of vintage trains and buses. Other fun festivities and surprises are planned for the Daley Plaza celebration.”

The CTA has unveiled a special logo for the celebration: a stylized number “75” in red and a stylized segment of a line in blue with white circles to represent a transit line as it appears on a map. At this writing, two trains have also been wrapped to display color schemes of the past. One features Mercury Green at the bottom and Croydan Cream at the top, with a Swamp Hollow Orange stripe below the windows (above). It was first used in 1952. According to the agency, those are the colors “that many older residents will remember as the ‘classic’ Chicago ‘L’ train design.” At this writing, that particular train is running on the agency’s Red Line. The Chicago Museum of Science and Industry sponsored the wrap.

The CTA is also running a contest, inviting participants to take a selfie in front the wrapped train and submit it through Instagram. There are details on the CTA website. The contest would be of interest primarily to Chicagoans, since the grand prize is a year of rides. The other paint scheme now on view features a red, white and blue Bicentennial design that was used from 1974 until 1976. During that time, some cars temporarily bore the names of famous people from American history.

In addition to the green and cream color scheme on the newly wrapped trainset, other photos on the CTA website show the same scheme on a single car with a pantograph (above) running on the Skokie Swift (the Yellow Line), an express run from Howard Avenue on the city’s North Side to Skokie—the last remnant of the Chicago North Shore & Milwaukee Railroad. That was the North Shore Line, which ran between the downtown Loop and Milwaukee until 1963. The CTA resurrected that part of the line as a non-stop service, and added one intermediate stop in 2012. Another shot (below) shows the mint green and Alpine white scheme that was used in the mid-1960s and 1970s.

The CTA was formed as an Illinois government agency to take over the formerly private Chicago Rapid Transit Company and Chicago Surface Lines. The former ran the elevated lines and built the subway under State Street. In its early days, it consolidated the “L” lines of the Chicago and South Side Rapid Transit Railroad, the Lake Street Elevated Railroad, the Metropolitan West Side Elevated Railroad (all of which started service in the 1890s), and the Northwestern Elevated Railroad (which started in 1900). The State Street subway (part of the Red Line) opened for service in 1943. The subway line under Dearborn Street and Milwaukee Avenue (part of the Blue Line) was added in 1951, after the CTA was established.

Chicago Surface Lines had operated streetcars in the city since 1913, after a consolidation of several streetcar companies, and also operated trolleybuses on some routes. The trolleybuses were gone by 1973. The last streetcars ran in 1958, but three PCC cars sporting Chicago liveries operate today, one in San Francisco on the Muni F Line, one in Kenosha, Wisc., and one at the Illinois Railway Museum (IRM), which actually is the only one of the trio from Chicago Surface Lines. The Muni and Kenosha PCCs were acquired from other agencies. The IRM owns another Chicago PCC, No. 4021, an earlier (1936, St. Louis Car-built) “Blue Goose” model, but it is inoperable.

According to the IRM, “CTA 4391 is the last surviving [operating] postwar PCC from Chicago. Nicknamed ’Green Hornets,’ the 600 largely identical PCC cars ordered by Chicago Surface Lines after World War II [in 1948 from St. Louis Car] were intended to modernize the city’s more heavily trafficked streetcar lines while more lightly traveled lines would be abandoned or replaced by buses. PCC 4391 was retired when only ten years old. It has operated at IRM since the mid-1970s. Chicago had the longest and widest PCC cars built for any American streetcar system. Car 4391 is so wide, in fact, that it’s not centered over the rails—it is actually offset a couple of inches to the right so that it could pass PCC cars going in the other direction on adjacent tracks, which were too close together for streetcars this wide to pass otherwise.” Pre-war 4021 and its wider, post-war younger sibling, 4391, are Chicago’s last-surviving PCC cars.

The CTA purchased the Chicago Motor Coach Company in 1952, which completed its takeover of the Windy City’s transit network.

The current CTA rail network consists of eight lines, all metropolitan-style subway or elevated lines, with no light rail lines streetcars. It is the second-largest such system in the country, exceeded only by New York’s. Six of the lines run through the downtown Chicago Loop throughout the service day, and most diverge from there to the city’s North, West or South Sides. The Skokie Swift (Yellow Line) runs only on the North Side. So does the Evanston (Purple) Line outside of peak commuting hours on weekdays and on weekends. During peak hours, it operates as the Evanston Express between there and the Loop downtown. Two lines run all night (the Red and Blue Lines), while most of the others have a service gap of three to four hours in the middle of the night.

As happened in other cities, a number of elevated lines were shut down and replaced with buses under CTA management, the most recent in 1996, when the two branches of the Green Line along 63d Street were cut back. Still, the downtown “L trains” in the Loop and diverging from it remain a tourist attraction in the city. The sights and sounds of trains moving along at the level of the third floor can now only be seen and heard downtown in the Windy City. The Loop itself runs above Lake Street (north), Wells Street (west), Van Buren Street (south) and Wabash Avenue (east). It was built during the mid-1890s and opened for service in 1897. It was threatened with demolition in the 1970s, but survived, due in part to the public outcry to save it. Today it is an integral part of Chicago’s rail transit.

Chicago has a small collection of vintage equipment. The CTA website contains descriptions of the historic cars. The oldest is Car No. 1 from the Chicago & South Side Rapid Transit Company, built in 1892 to take riders to the Columbian Exposition, the World’s Fair that ran in 1893. That car is on permanent static display in the Chicago History Museum, as part of an exhibit about the fair. The oldest operating cars are Nos. 4271 and 4272, built and placed into service in 1923. About 450 of the 4000-series cars were built between 1914 and the late 1920s, but those are the last two on the property. There are four 6000-series cars from the 1950s: two married pairs, which ran until 1992 and spent much of their retirement in museums before returning to the CTA. There is also an eight-car train of 2400-series cars, built between 1976 and 1978, and sporting the red, white and blue Bicentennial colors. In addition, the agency has three vintage buses from the 1960s. At this writing, the CTA says that the vintage equipment will run during the 75thanniversary event.

So the CTA and many Chicagoans are preparing for a major celebration on Oct. 1, the actual anniversary of the agency’s start. While most riders in Chicagoland use the CTA for their transportation needs, there is more to the area’s rail picture. There are 11 regional rail lines on Metra, most of which run full-service schedules. There is also the South Shore Line to South Bend, Ind., officially known as the Northern Indiana Commuter Transportation District. There are also six Amtrak lines of corridor length and eight Amtrak long-distance routes to and from the city. This article is only part of our coverage about transit in Chicago. We will have an overview of Chicago’s rail scene in the September issue of Railway Age. In the meantime, Happy Birthday, CTA!